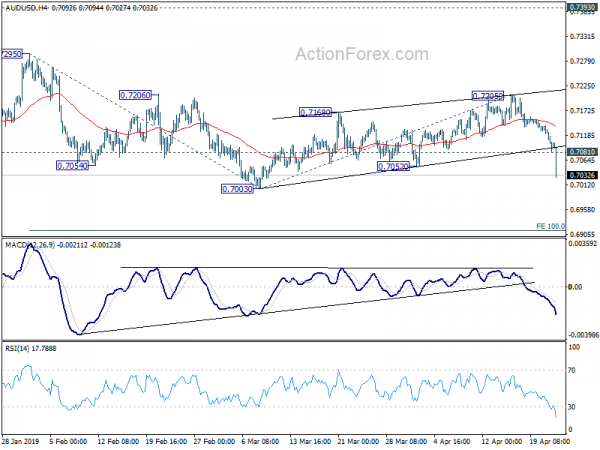 Australian Dollar is overwhelmingly the worst performing one today. It suffers heavy selling after much weaker than expected CPI raises the chance of RBA rate cut later this year. New Zealand Dollar follows as second as RBNZ is also expected to cut, just probably earlier in May. Canadian Dollar is the third weakest on anticipation that BoC would drop tightening bias with today’s rate decision statement.

On the other hand, Yen is the strongest one for today. Despite yesterday’s strong rally in US stocks, Asian markets are generally weaker. Dollar follows as the second strongest one. Solid corporate earnings are reducing the chance of a Fed cut, at least. Sterling is the third weakest strongest for today. While GBP/USD breaks 1.2960 key support, the Pound is still range bound against Euro and Yen.

Technically, with today’s steep decline, AUD/USD is now likely resuming the decline from 0.7295. 0.7003 support will be an immediate focus and we’d expect a decisive break there to confirm near term bearishness. Similarly, AUD/JPY is heading towards 77.44 equivalent support while EUR/AUD is heading to 1.6122 equivalent resistance. EUR/USD recovers well ahead of 1.1176 low but this level will remain the focus in near term. USD/CAD breaches 1.3451 resistance and focus is immediately on 1.3467. Firm break will resume rebound from 1.3068 towards 1.3664 high.

Australian Dollar is sold off sharply after much weaker than expected consumer inflation data.

The weak inflation data heighten the prospect of RBA rate cut in May, together with RBNZ. But for now, it still seems a bit early for RBA to act given relative resilience in job data. May is more an ideal occasion for RBA to turn dovish with new economic projections and SoMP. If it happens, the case for a cut in August would be secured.

S&P 500 and NASDAQ closed at records, no follow through in Asia

Technically, the strong momentum suggests that both S&P 500 and NASDAQ will easily take out intraday records at 2490.91 and 8133.30. That could likely pull DOW upward to equivalent level at 26951.81. Yet, we’re still not too convinced that the indices are in long term up trend resumption yet.

Two developments give us some doubts over the underlying momentum of the global markets. Firstly, Asian markets are not following and with major indices, except Singapore Strait Times, turned red after initial gains today. Secondly, Yen is the strongest one for the week so far while USD/JPY is stuck in tight range only, which isn’t the usually development seen in strong risk on market. Thus, there will be a lot of caution in the next move up.

US-China trade talks to resume in Beijing on Apr 30, Kudlow said cautiously optimistic but not there yet

The White House announced that Trade Representative Robert Lighthizer and Treasury Secretary Steven Mnuchin will travel to Beijing to on April 30 to continue trade talks. China’s team will again be led by Vice Premier Liu He. Liu is expected to fly to Washington on May 8 for additional discussions. In the statement, it’s noted that “the subjects of next week’s discussions will cover trade issues including intellectual property, forced technology transfer, non-tariff barriers, agriculture, services, purchases, and enforcement.”

Earlier yesterday, Larry Kudlow, Director of the White House National Economic Council, said the negotiations were making progress and he was “cautiously optimistic” on striking a deal. He hailed that “we’ve come further and deeper, broader, larger-scale than anything in the history of U.S.-China trade.”

But Kudlow also noted that “We’re not there yet, but we’ve made a heck of a lot of progress”. “We’re still working on the issues, so-called structural issues, technology transfers”. Also, “ownership enforcement is absolutely crucial. Lowering barriers to buy and sell agriculture and industrial commodities. It’s all on the table.”

BoC to drop tightening bias, or would it?

BoC is widely expected to keep overnight rate unchanged at 1.75% today. Back in March, the central bank has already shifted to a more cautious stance and noted outlook “warrant a policy interest rate that is below its neutral range”. Also, given the mixed picture ” it will take time to gauge the persistence of below-potential growth and the implications for the inflation outlook.” But after all, tightening bias was maintained and there was just “increased uncertainty about the timing of future rate increases.”

Since then, data have been mixed. Headline CPI rose to 1.9% yoy in March, sharply higher than February’s 1.5% yoy. Core CPI also picked up slightly from 1.5% yoy to 1.6% yoy. Median CPI rose to 2.0% while trimmed mean CPI rose to 2.1% yoy. Job data remained resilient too. However, BoC’s Business Outlook Survey (BOS) disappointed with the overall business index falling to -0.6% in 1Q19. The result pointed to “a moderation from previously high levels of domestic and foreign demand for firms in most regions”.

There are speculations that BoC could totally drop tightening bias, and indicate that rates will stay there for longer. However, the recent data might not be giving enough pressure for BoC to do it. Also, oil price has been in strong rally since WTI bottomed at 42.05 last December. The current picture, with WTI back above 65, is drastically different from that one in January. Thus, the anticipated neutral shift is far from being certain. BoC will also release new economic projections. Today’s announcement is a wild card.

AUD/USD’s decline accelerates to as low as 0.7027 so far. The strong break of 0.7052 support affirms the case of resumption of fall from 0.7295. Intraday bias remains on the downside for 0.7003 support first. Break will confirm and target 100% projection of 0.7295 to 0.7003 from 0.7205 at 0.6913. Decisive break there will indicate further downside acceleration. On the upside, above 0.7081 minor resistance will turn intraday bias neutral and bring consolidation, before staging another fall.