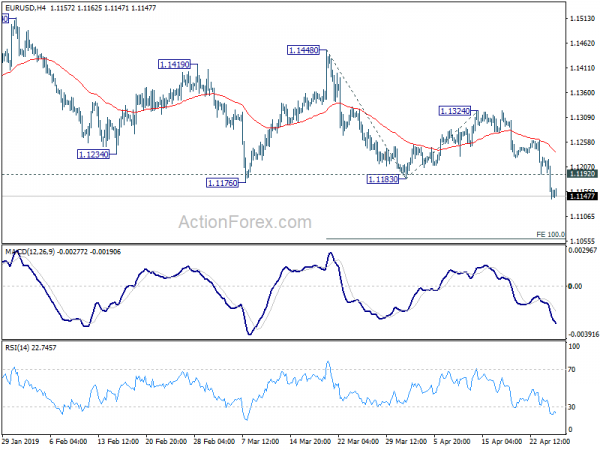 It appears that the global economy is now running at two different speed. US is maintaining firm momentum despite all the uncertainties and slowdown elsewhere. Strong corporate earnings provide evidence on underlying resilience. While global central banks are turning cautious or even dovish, there is little pressure for Fed to reverse course yet.

Dollar and Yen are the two strongest one for the week. US assets are given a strong boost on flight-to-quality flows. US stocks digested some of recent gains overnight, but S&P 500 and NASDAQ remained closed to record highs. US 10-year yield dived notably by -0.048 to 2.522 after being rejected by 2.6 handle just days again. This indicates strong demand for US treasuries. Dollar also surge through key resistance level against Euro.

On the other hand, Yen is some what boosted by flight-to-safety flows. In particular, German 10-year yield turned negative again for the first time since April 12. US yields also tumbled. Even though Asian stocks remain resilient, fall in global yields is enough to give Yen a race with Dollar as the strongest.

BoJ left monetary policy unchanged today as widely expected. More importantly, the central bank now provides much clearer forward guidance. It’s noted that “the Bank intends to maintain the current extremely low levels of short- and long-term interest rates for an extended period of time, at least through around spring 2020”. That’s based on “uncertainties regarding economic activity and prices including developments in overseas economies and the effects of the scheduled consumption tax hike.”

Under the yield curve control framework, short term interest rate is kept at -0.1%. BoJ will continue to purchase JGBs to keep 10-year yield at around 0%, with some flexibility. Annual pace of monetary base expansion is kept at JPY 80T. Y Harada dissented again, proposing to tie forward guidance to price stability target. G Kataoka also dissented too, urging BOJ to commit to take additional easing measures if there is downward revision in medium- to long-term inflation expectations. The vote was by 7-2.

On the economy, BoJ said it’s likely to “continue on a moderate expanding trend” despite the impact from overseas slowdown. CPI continued to show “relatively weak developments”, comparing to labor market tightening. But it expects CPI to “gradually” increase towards 2% target. Though, there are “high uncertainties regarding the outlook for economic activity and prices including developments in overseas economies”.

Yesterday, BoC kept overnight rate unchanged at 1.75% and drops tightening bias. The accompanying statement concluded by saying that “an accommodative policy interest rate continues to be warranted”. The “appropriate degree” of accommodation will be evaluated as new data come in . In particular, BoC will monitor “developments in household spending, oil markets, and global trade policy”. The sentence regarding ” future rate increases” was omitted.

UK National Institute of Economic and Social Research (NIESR) pushed back their BoE rate expectation by a year in the new forecasts. NIESR economist Garry Young said “now we expect the first increase in Bank Rate to be next August rather than this August.”

NIESR also noted that Brexit related uncertainty “has led to investment plans being deferred and increased stockbuilding.” Under the main scenario of “soft Brexit”, GDP growth will continue at around 1.5% in both 2019 and 2020. Unemployment rate will stay at around 4%. CPI will remain at around 2%.

Regarding different Brexit scenarios, growth will be similar between staying in EU and “soft Brexit”. However, growth will be weaker is UK is to stay in the customs union, and even worse in a no-deal Brexit.

US durable goods orders and jobless claims will be the major focuses of the day. UK will release CBI trends total orders.