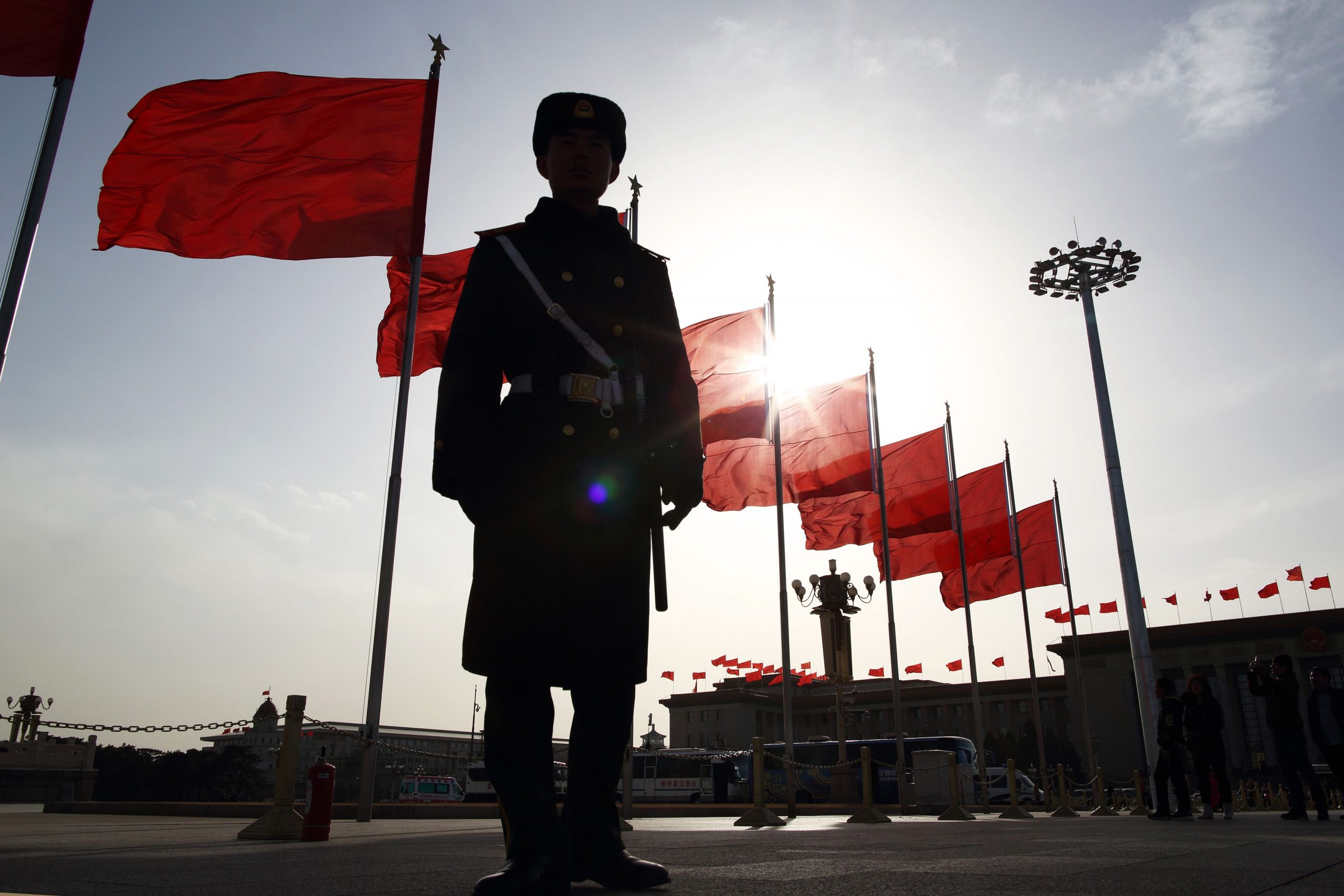 A paramilitary police officer stands guard in front of red flags at Tiananmen Square in Beijing, China, on Monday, March 2, 2015.

The program began roughly six years ago with a focus on building out rail and maritime trade routes connecting China with central Asia, Europe and Africa. While critics have charged that the initiative is simply a branding exercise for Beijing to spread its global influence through lending — and the associated debt — for projects like ports and bridges, Xi has now made it clear he’s aiming even further.

That is, the second Belt and Road Forum that wrapped up this weekend in Beijing demonstrated that the China-led program now seeks to influence technology and governance around the world.

“There will be a shift away from … hard infrastructure projects,” Tom Rafferty, principal economist for China at The Economist Intelligence Unit, said Friday. “(The Belt and Road is) going to have a broader range.”

In fact, Rafferty said, the Chinese leader demonstrated that he sees the program “as a China global governance initiative.”

Xi’s speech at the forum’s opening ceremony on Friday proclaimed that, through the Belt and Road, China would “strengthen cooperation in customs, taxation and audit oversight” and pursue cooperation on technological development.

The joint communique released at the conclusion of the forum also said Belt and Road participants “aim to enhance connectivity among financial markets” and encourage the development of digital infrastructure.

Although it’s always been difficult to pin down the exact nature of the Belt and Road Initiative, the latest pronouncements indicate how Beijing is, as many had expected, using the program as a way to expand its global influence.

“I think it is fair to say that the introductory phase of Belt and Road is over,” Jacob Shapiro, director of analysis at online publication Geopolitical Futures, said in an email.

“A number of countries have signed on, money has been distributed, some projects have been completed and many other projects either failed or didn’t get off the ground,” he said. “I now expect China to be more strategic about where and what projects it takes on, with the goal being that long elusive goal of previous would-be Eurasian powers: to connect the Eurasian landmass.”

China already has a close relationship with major countries in central Asia, and is making steady inroads into Europe. In March, Italy became the first G-7 nation to officially endorse the Belt and Road Initiative by signing a memorandum of understanding. Luxembourg signed its own agreement with Beijing a few days later.

Switzerland has also formalized its support. Swiss Confederation President Ueli Maurer was one of nearly 40 national leaders named in a joint communique for the forum this past weekend.

Russian President Vladimir Putin and Greece Prime Minister Alexis Tsipras were also among the attendees. The U.S. did not send a high-level representative.

The net result appears that, since the first Belt and Road forum in 2017, Beijing has gained more international support for the program — despite criticism from the likes of Washington.

“(Xi) wants to establish China as a global power,” Rafferty said. “Probably China feels it’s going in an OK direction (in finding support for Belt and Road). The general movement still seems to be there.”