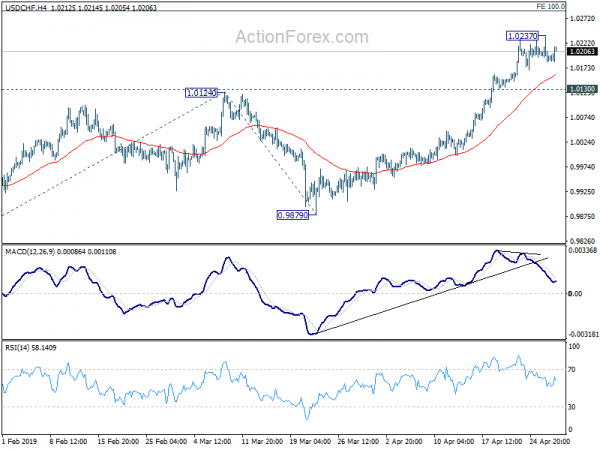 Dollar strengthens mildly in early US session as supported by strong personal spending growth in March. Though, upside is capped by steadily cooling core inflation. For now, today’s set of data is not decisive enough to trigger a breakout in the greenback yet. Dollar would likely engage in more consolidative trading, awaiting FOMC, ISM indices and NFP later in the day.

Staying in the currency markets, Australian and New Zealand Dollars are the strongest one for today so far. Both are just digesting some of recent losses. There is little chance of bullish reversal yet as inflation data from both countries pointed to rate cuts down the road. Yen is the weakest one for today, followed by Swiss Franc as risk sentiments are steady globally, while German 10-year yield recovers.

US Treasury Secretary Steven Mnuchin told Fox Business Network that he hoped to finalize a trade agreement with two more rounds of talks. In particular, he indicated that the issue regarding enforcement is now close to finished. He said, “We hope within the next two rounds, in China and in DC, to get to the point where we can either recommend to the president that we have a deal or recommend that we don’t”. Mnuchin said. “I think there is a strong desire from both sides to see if we can wrap this up or move on.”

Mnuchin and Trade Representative Robert Lighthizer will be in Beijing on Tuesday to start another round of trade talks with China. This week’s meeting will cover issues including intellectual property, forced technology transfer, non-tariff barriers, agriculture, services, purchases, and enforcement. Chinese Vice Premier Liu He will lead a delegation to Washington for additional discussions starting on May 8.

Eurozone Economic Sentiment Indicator dropped -1.6 to 104.0 in April, missed expectation of 105.0. That’s the 10th consecutive month of decline and the lowest level in more than two years. Amongst the largest Eurozone economies, the ESI rose only in the Netherlands (+0.4), while it decreased in France (-1.0) and Italy (-1.0) and, more significantly so, in Germany (-1.5) and Spain (-2.6). Industrial Confidence dropped to -4.1, down from -1.6 and missed expectation of -2.0%. Services Confidence was unchanged at 11.5, matched expectation. Consumer Confidence was finalized at -7.9.

Business Climate Indicator dropped -0.12 to 0.42, below expectation of 0.49. Managers’ views of the past production, their production expectations, and their assessments of overall order books and the stocks of finished products declined significantly. Meanwhile, there was some relief in the appraisals of export order books.

In the bigger picture, medium term up trend from 0.9186 is extending. Current rise should target 1.0342 resistance next. For now, we’d be cautious on strong resistance from there to limit upside, until we see medium term upside acceleration. On the downside, break of 0.9879 support is needed to indicate reversal. Otherwise, outlook will stay bullish in case of deep pull back.