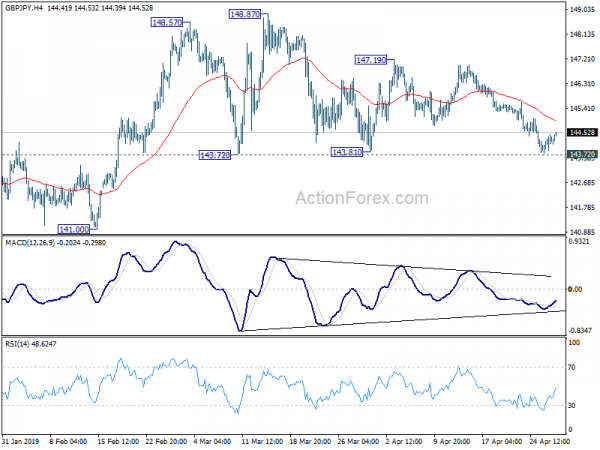 The forex markets are rather quiet in Asia, as Japan starts an ultra-long 10-day holiday ahead of Imperial succession. New Zealand and Australian Dollar extends the corrective recovery started late last week, ignoring initial weakness in Chinese stocks. On the other hand, Yen is generally lower, followed by Canadian. The economic calendar is extremely busy this week, with a lot of heavy weight data scheduled. For today, US PCE inflation will be the major focus and would likely point to sluggishness in underlying inflation pressure.

Technically, after last week’s strong rally, Dollar and Yen have turned into consolidation. Losses in both currencies are so far rather limited. The markets could be rather volatile this week. In particular, Yen crosses could further test key near term support levels. Immediate focus will be 143.72 in GBP/JPY. Meanwhile, 123.65 in EUR/JPY, 77.44 in AUD/JPY and 81.63 in CAD/JPY will all be watched to confirm Yen’s bullish comeback.

US Treasury Secretary Steven Mnuchin and Trade Representative Robert Lighthizer will be in Beijing on Tuesday to start another round of trade talks with China. Ahead of that, Mnuchin was quoted saying “we’re getting into the final laps.” He also noted, “both sides have a desire to reach an agreement,” and “we’ve made a lot of progress.” Trump also said late week Chinese President Xi Jinping will come to the White House “soon” to seal the trade deal, without giving any details as usual.

But it’s also reported that significant differences remain, including in the area of intellectual property theft. In a UTRS report published last week, it’s criticized that “despite a broad government reorganization, including of intellectual-property responsibilities among government agencies, and proposed revisions to IP laws and regulations, China failed to make fundamental structural changes to strengthen IP protection and enforcement, open China’s market to foreign investment, allow the market a decisive role in allocating resources, and refrain from government interference in private sector technology transfer decisions.”

On Sunday, China hit back and denied the claims typically. National Intellectual Property Administration (NIPA) Director Shen Changyu said that over 5,600 people in some 3,300 cases were arrested for intellectual property rights infringement in 2018. Shen added, “Some countries’ criticisms of China’s IP protection lack evidence and are non-specific.” And, “China has some problems and we are stepping up efforts to fix them. But meanwhile, IP infringement is a global problem that exists in every country”. “Every country should try to improve their business environment and fix their problems, instead of window dressing themselves,”

According to a USTR statement, this week’s meeting will cover issues including intellectual property, forced technology transfer, non-tariff barriers, agriculture, services, purchases, and enforcement. Chinese Vice Premier Liu He will lead a delegation to Washington for additional discussions starting on May 8.

Leaders of Canada and Japan hailed the success and benefits of the 11-country trade pact when they met in Ottawa on Sunday. Under the Comprehensive and Progressive Agreement for Trans-Pacific Partnership (CPTPP), Canadian Prime Minister Justin Trudeau said beef exports to Japan nearly tripled.

Trudeau added, the pact “has benefited tremendously Canadian citizens, Japanese citizens and businesses and indeed people throughout the region.” And, that “stands in stark contrast with the United States withdrawal … continuing to move forward on freer more open trade, according to the rules we can all agree on, is something we need more in the world.”

Japanese Prime Minister Shinzo Abe also said the CPTPP  “should be a model going forward,” describing it as a meaningful way “to disseminate a 21st century type of free and fair rules-based (trade).”

Trump pulled out of the Trans-Pacific Partnership (TPP), the former version of CPTPP, as one of the first moves after taking office more two years ago. As of the meeting between Trump and Abe last Friday, the US and Japan are still working on a trade deal.

Trump said the deal “can go fairly quickly” and negotiations are “moving along very nicely and we’ll see what happens”. He also said “we’ll be discussing very strongly agriculture because, as the prime minister knows, Japan puts very massive tariffs on our agriculture…and we want to get rid of those tariffs.”

Fed and BoE to meeting, crucial data waiting on the line too

Two central banks will meet this week. Fed is widely expected to keep interest rate unchanged at 2.25-2.50%. Fed will, without a doubt, maintain its patient stance regarding any monetary policy adjustment. Normalization is considered largely completed and sustained trend in inflation or unemployment is needed to emerge first before Fed takes another move. Dollar bears could look Fed Chair Jerome Powell’s comments regarding concerns over sluggish inflation. On the other hand, Dollar bulls would like to see Powell dismissing the talks of rate cut as being premature.

BoE is also widely expected to keep interest rate unchanged at 0.75%. Asset purchase target will be held at GBP 435B. The decisions should also be made by unanimous votes. The main focus will be on the quarterly inflation report. But after all, the form of Brexit remains the single most important factor on the economic outlook. The current economic projections would be rather academic if the assumption of smooth and soft Brexit is not realized.

In addition, the economic data featured this week are very heavy weight. US PCE inflation, ISM indices and non-farm payroll could confirm the picture of solid growth with little price pressure. Eurozone GDP will finally show how bad the slowdown was, and CPI will also be featured. UK PMIs could be more market moving that BoE. Canada CPI, New Zealand employment, Australia housing data could move respective currencies. China PMIs will also be crucial to global market sentiments in general.

Intraday bias in GBP/JPY remains neutral at this point, with focus on 143.72 key support. On the downside, decisive break of 143.72 will indicate near term reversal, after rejection by 149.48 key resistance. In that case, intraday bias will be turned to the downside for 141.00 support first. Meanwhile, rebound from current level will retain bullishness. Decisive break of 149.48 key resistance will carry larger bullish in implications and target 156.58 resistance next.