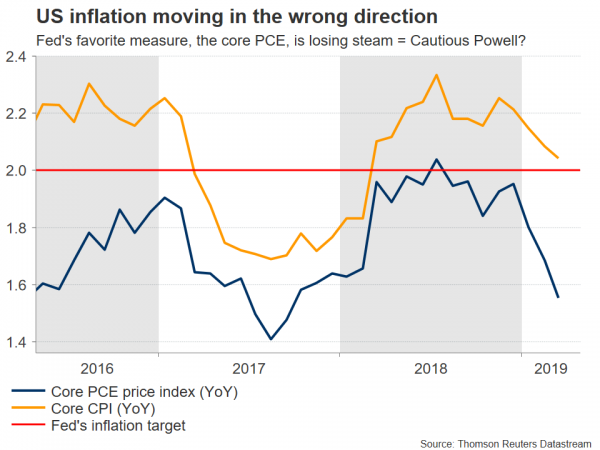 The Fed will announce its policy decision on Wednesday at 18:00 GMT. No action is expected, so Chair Powell’s remarks in the subsequent press conference (18:30 GMT) will likely steal the show. Inflation has cooled lately, which combined with still-elevated risks abroad, suggest that the Fed could maintain a cautious tone. While that may weigh on the dollar initially, any downside is unlikely to be massive, given how pessimistic market pricing already is.

The Fed shifted to a more ‘cautious’ stance at its latest meeting, revising down its forecasts for economic growth and future interest rates, effectively abandoning its earlier plans for raising rates in 2019. Chairman Powell cited several – mostly foreign – factors behind this dovish pivot, with risks around Chinese and European growth, as well as trade uncertainty topping the list.


Hence, policymakers signaled they are comfortable with keeping rates unchanged for as far as the eye can see while they monitor these risks. Since then, incoming data have been mixed, vindicating the Fed’s defensive approach. For instance, even though GDP growth clocked in at a robust 3.2% annualized rate in Q1, that strength was owed mainly to one-off factors, implying it could reverse in Q2. Meanwhile, underlying inflation as measured by the core PCE price index slowed to 1.6% in March on a yearly basis, which is alarming.

On the global stage, there have been some signs that China and Europe are stabilizing, but neither economy is ‘out of the woods’ yet. And while both American and Chinese officials appear optimistic about a trade deal, one hasn’t been signed yet.

Whether correct or not, traders seem convinced the Fed will cut rates before the year is over. A full quarter-point rate cut by December is now almost fully priced in (~85% probability), according to the Fed funds futures.

The most surreal part is that despite growing expectations for Fed rate cuts, the dollar has continued to gain in recent weeks. Currencies tend to track changes in relative interest rates, but that hasn’t played out lately, with the dollar advancing even as rate differentials moved against it.

This probably has more to do with other major currencies lacking appeal. For example, the euro can’t attract demand with the European economy so fragile, the British pound continues to be haunted by Brexit concerns, and Japanese interest rates are so low that the yen isn’t appealing without episodes of risk aversion. Meanwhile, central banks from Australia to New Zealand to Canada have adopted a more cautious stance, which has weighed on their respective currencies.

Powell could maintain a defensive stance

Blending it all together, slowing US inflation combined with still-elevated risks overseas suggest that Chair Powell could maintain a defensive tone, implicitly keeping a rate cut on the table should the economy deteriorate. While that may hurt the dollar a little, market pricing is already very pessimistic, so any downside is unlikely to be massive.

Only game in town, for now

In the big picture, the dollar’s overall path will likely be decided mainly by how foreign economies perform. For now, the greenback appears to be ‘the only game in town’, due to a lack of better alternatives. However, keep an eye on the European growth story – any clear signs that the Eurozone is recovering could be a game changer moving forward.

Taking a technical look at dollar/yen, initial support to declines may be found around 110.85, a zone marked by the April 10 lows. Even lower, the 109.70 area would attract attention.

On the flipside, another wave of advances may encounter resistance near 112.40, which capped the rally on April 24, with an upside break opening the door for a test of 114.0.