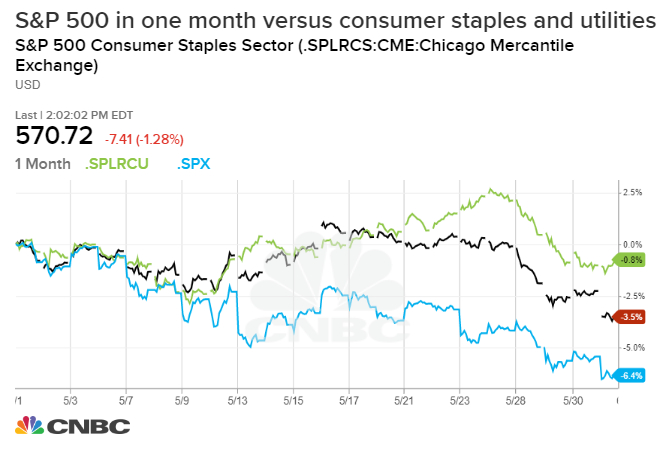 Traders work on the floor at the New York Stock Exchange (NYSE) in New York.

Stocks posted their first negative month of the year as trade angst deepened, and it doesn’t get easier from here since the U.S. toughened its stance on more trading partners. Now is a good time for investors to find the trade-proof areas to hide out and tariff-ridden companies to avoid.

Not only did investors grapple with more back and forth trade threats between the U.S. and China, President Donald Trump’s latest vow to slap tariffs on all Mexican imports also fueled investor anxiety. The surprise move also undermined the chance of a trade resolution with China.

In such a turmoil, investor could add consumer staples and utilities as defense while staying away from companies with explicit sales exposure to China, according to Wall Street analysts.

“Our favorite ways to add defensive exposure remain Consumer Staples and Utilities. For both, China tariff/trade war risks are lower than other sectors, valuations have looked more reasonable than other defensive sectors,” said Lori Calvasina, head of U.S. equity strategy at RBC, in a note on Wednesday. “Staples has also already been deeply out of favor.”

Consumer staples and utilities are two traditional trade-insulated sectors as they are domestically focused and non-cyclical. Both sectors in the S&P 500 outperformed in May when the trade battle heated up, with utilities losing just 1.5% and consumer staples down 3.4%. The S&P 500 was down 6.3% during the same period.

Companies with high revenue exposure in China could take a much bigger hit from the trade war and should be avoided analysts said. These firms are concentrated in technology sector, especially chipmakers, according to Goldman Sachs.

Semiconductors Qualcomm, Broadcom, Qorvo and Micron Technologies are among the companies with the highest sales in China, Goldman Sachs said. Qualcomm, Broadcom and Micron are all down more than 20% this month. Their sell-off deepened after President Trump’s executive order to halt Huawei’s ability to purchase American-made chips. The VanEck Vectors Semiconductor ETF fell more than 14% in May.

RBC said industries that are “very negative” due to their margin sensitivity to the China tariff include chemicals, coatings, department stores and railroads. The bank listed Whirlpool, American Eagle Outfitters, Urban Outfitters and Best Buy among the stocks most at risk based on a survey of RBC’s analysts.

The bank expects the S&P 500 to bounce back to 2,950 by year-end as dip-buying comes in full force, but the recent pullback is nowhere near done.

“We continue to think that the S&P 500 could trade as low as 2750 over the summer or even 2650,” Calvasina said. “Institutional investor sentiment had gotten close to euphoria and that the US stock market was vulnerable to bad news again. Positioning has pulled back slightly in recent weeks, but remains extremely elevated. This tells us the unwind isn’t done yet.”