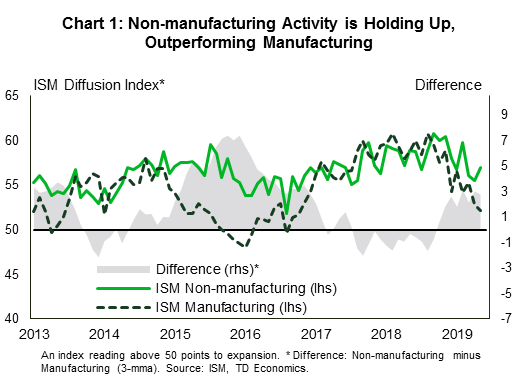 Trade tensions continued to dominate economic headlines this week, with the U.S.-Mexico quarrel taking center stage. Mexico sent a senior delegation to D.C. to try to address President Trump’s concerns regarding illegal migration, and to defuse the impending tariff threat. While some progress has been made, as at the time of writing, it is unclear if a deal can be reached by Monday’s deadline.

With Mexico busy at the negotiation table, President Trump tilted the conversation back to China by reaffirming the threat to raise tariffs on another $300 billion of Chinese goods. China’s Commerce Ministry struck a defiant tone in response, suggesting that China would “fight till the end” if need be. Beyond the colorful language, there were signs that the conflict is spreading beyond goods trade, with China cautioning its citizens about the dangers of travelling or studying in the United States.

The uncertainty generated by these events has kept the Fed on high alert. Among several Fed speeches this week, Fed Chair Powell noted that the Fed was monitoring trade developments closely, and was ready to “act as appropriate to sustain the expansion.” Chair Powell’s emphasis on the Fed’s flexibility appeared to soothe equity markets, which rebounded to a three-week high.

– Note: we have created a profitable forex advisor with low risk and stable profit 50-300% monthly!–

Financial conditions factor heavily in FOMC decisions, but economic data is the primary determinant. On that front, data this week reinforced the view that while growth has slowed, there are no impending signs of calamity. Trade tensions are weighing on the manufacturing sector, but the much larger services (non-manufacturing) side of the economy is holding up, as highlighted by the divergent performance of the ISM indices through May (Chart 1). That said, the most awaited report of the week, the jobs report, was a bit of a downer, with payrolls rising by only 75k in May – over 100k short of market consensus. This came alongside downward revisions of 75k to the previous two months. Looking through the recent volatility, the hiring trend has slowed but remains decent, averaging 151k in the last three months (Chart 2). This is broadly in line with our expectations. In addition, most other aspects of the May report were encouraging. The unemployment rate held steady at 3.6% and wage growth, while slowing a touch, held above 3% y/y.

With the broad economic backdrop still decent, trade and global growth remain the ultimate wildcard. Mexico is the second biggest source of goods entering the U.S. after China. As such, the impending 5% tariff will be problematic, particularly for products that cross the border multiple times (i.e. auto parts). Prospects for an increase in the tariff rate to 25% are more daunting, with supply chain disruptions, reduced market access and the hit to confidence all more acute. A simultaneous escalation in tensions with Mexico and China would accentuate these risks further. In the event that tensions escalate in this fashion, the Fed will have little choice but to act.

Global equity markets were on a better footing this week. Investors’ spirits were lifted by a more dovish stance of some central banks which fueled hopes of a rate cut amid escalating trade tensions and growing downside risks to global growth. The S&P/TSX composite followed it its global peers, ending the week higher. After falling precipitously last week, oil prices (WTI) edged slightly lower this week, while Canadian dollar has strengthened.

This week’s economic data also looked reassuring, providing further credence to ours and the Bank of Canada view that after two quarters of tepid growth the Canadian economy is emerging from the soft patch. International trade showed improvement. Building on a healthy momentum in March, April’s data delivered further good news. Trade deficit narrowed to $0.97 billion in April, down from a revised $2.3 billion deficit a month earlier, as export volumes rose 2%, while import volumes declined 1.9% (Chart 1).

Some green shoots have emerged in the housing market in spring, with activity rebounding after weather-induced weakness in Q1. Home sales and average home prices posted two back-to-back gains in March and April, and while May’s nation-wide data is not due for another ten days, this week’s data for Toronto and Vancouver suggests that housing market likely continued to firm in May. Lower mortgage rates and healthy employment and population gains will further support activity in the coming months.

In terms of the details, the Toronto housing market showed further signs of improvement, with sales and prices rising in May. In Vancouver sales also posted a double-digit increase on the month. That being said, despite the sizeable gain, Vancouver’s housing market will not be off to the races any time soon as the overall demand remains very subdued relative to history, hindered by lingering affordability challenges and several rounds of provincial regulations, on top of stricter federal mortgage rules and past rate hikes.

Capping this week’s encouraging data were today’s employment numbers. Following a blockbuster print in April, job creation continued at a decent clip in May with economy adding 28k jobs. However, the fly in the ointment was that all of the gains (and then some) were in self-employment, while both private and public sectors shed jobs. That being said, some moderation in employment was to be expected given the recent strength in hiring (Chart 2).

All in all, recent data points suggest that economic backdrop is indeed improving, in line with the Bank of Canada view. After two-quarters of sub-0.5% prints, we expect real GDP growth will average closer to 2% over the rest of the year. While the outlook is laden with significant risks, the Bank of Canada believes that “the degree of accommodation [provided at present] remains appropriate”. Thus, even as the market expectations intensify for the U.S. Federal Reserve to cut policy rate this year, with similar, if less intense moves seen here as well, we expect the Bank of Canada to stay pat.

We look for headline CPI to slow two tenths to 1.8% in May on the back of a mild 0.1% seasonally-adjusted monthly increase. The softer monthly increase is largely the result of the normalization in energy prices, which were a major driver to the upside in recent months. Core inflation, on the other hand, should remain steady at 2.1% y/y, reflecting a firm 0.2% m/m advance. We pencil in a softer 0.2% m/m increase in core services, which we expect to be aided by a 0.2% rebound in core goods – its first increase in four months. We anticipate OER to remain largely steady at 0.3% m/m and for the ex-shelter segment to slow marginally on a monthly basis.

We expect a firm increase in auto sales (+2.5% m/m) to be the main driver behind a 0.8% rise in the headline measure for May. Indeed, the ex-auto measure should advance at a softer 0.1% print during the month. Although we expect sales at gasoline stations to remain supportive of the headline figure, it will be so at a lower magnitude reflecting the stabilization in gasoline prices. Furthermore, we anticipate sales in the key control group to rebound modestly at 0.2% m/m following the unexpected flat increase posted in April.

TD looks for residential housing starts to slow to a 212k pace in May, returning some of the gains from the prior month on a pullback in multi-unit construction. April housing starts were noteworthy on account of a record month for multi-unit construction in urban centers, with developers breaking ground on over 175k (annualized) units during the month. While housing stock remains in short supply across certain fast growing regions, permit issuance has fallen by nearly 20% in the last two months of available data which will weigh on multi-unit starts in May. Single family starts have stabilized since bottoming out at 37.5k in February and while we see risk of some giveback, any downside should be modest given current levels.