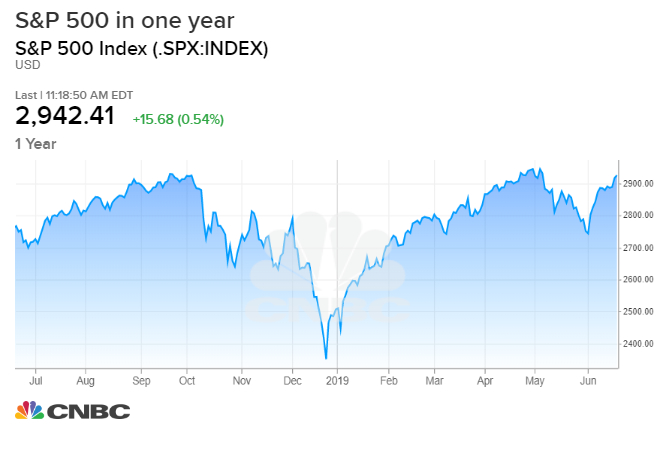 Traders work on the floor at the New York Stock Exchange, June 5, 2019.

The S&P 500 just set a new intraday record Thursday. For doubters thinking the rally is just a last gasp of the decade-long bull market, analysts who study charts to make buying and selling decisions believe there is more to run.

From market breadth to the breakout from a so-called flag pattern to the number of times major indices have tested resistance levels, there are enough technical indicators pointing to more upside to the stock market.

“One indication that gets overlooked which is really, really bullish historically is the expanding number of 52-week highs and that number was over 23% back about two weeks ago,” said Jeff DeGraaf, founder and chairman of Renaissance Macro Research. The number of S&P 500 constituents that have hit new 52-week highs is an indicator for market breadth.

“That just said to us that the internal strength of this market was far better than people were giving it credit for. I think you have to look at those internals and say ‘boy, this is meaningful,” said DeGraaf.

Thursday’s rally came after the Federal Reserve hinted at a rate cut on the horizon while dropping the word “patient” from its statement. Traders are now pricing in a 100% chance of an easing next month. Hopes for a easier monetary policy have helped lift the market from its May turmoil which saw the S&P 500 dropping more than 6% amid the escalated trade tensions between the U.S. and China.

“Yesterday we saw a positive reaction to the Fed announcement and it confirmed a short-term breakout from a consolidation phase that we call a flag pattern. The flag pattern tends to see an immediate upside follow-through,” Katie Stockton, Fairlead Strategies’ founder and managing partner.

“That’s why it’s meaningful because not only did we see a short-term breakout, but given the proximity of final resistance for the S&P 500 of 2,941, an immediate upside follow-through could mean a new all-time high. While right now the breakout is short term in nature, it could easily become something that has a long-term implication,” Stockton said.

If Thursday’s rally holds through Friday, the breakout would be “a big deal” from a technical perspective and would prompt higher price targets, Stockton added. The S&P 500 surged 0.9%, hitting a record high of 2,954.33 on Thursday.

The Dow Jones Industrial Average, sitting at around 26,700 on Thursday, is currently testing the resistance level of 26,500 to 26,700 for the fourth time, according to Jonathan Krinsky, chief market technician of MKM Partners.

“Usually there’s no such thing as quadruple tops, so I sense that we do see at least marginal new highs on the Dow,” Krinsky said.