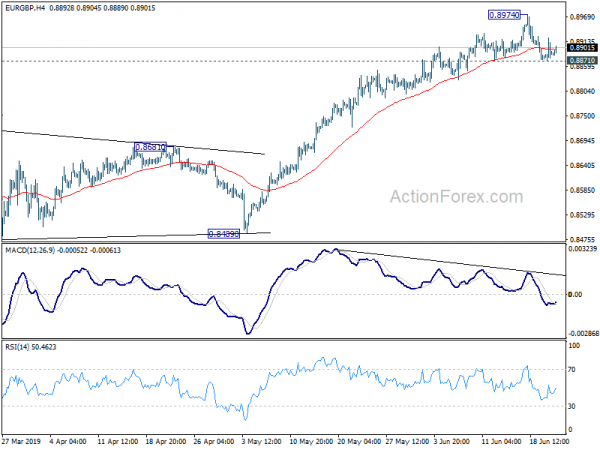 Dollar recovers mildly today but there is apparently no follow through buying for a turn around. The greenback is still feeling heavy on dovish Fed which opened the door for rate cut at this week’s FOMC meeting. Weakness in Dollar is also apparent in the strength of Gold, which breaches 1400 handle today as rally extends. On the other hand, Swiss Franc and Canadian Dollar remain generally firm on Middle East tensions, which drove up oil prices too. It’s reported that Trump ordered military strike against Iran after US drones were shot down, but then called it off. The situation is still very volatile.

Focus will now turn back to Eurozone PMIs. Euro is indeed the second weakest for the week as ECB President Mario Draghi hinted on more stimulus. It’s still uncertain whether Euro or Dollar would end up as the worst performing one for the week. Technically, EUR/GBP is a pair to watch, with 0.8871 minor support in focus. Break there will confirm short term topping and should bring deeper pull back to 55 day EMA at 0.8780. EUR/JPY is also heading back to 120.78 support and break will resume decline from 127.50, towards 118.62 low.

Former Foreign Minister Boris Johnson and current Foreign Minister Jeremy Hunt entered the final race for UK Conservative leadership after Thursday votes. Johnson (with 160 votes) and Hunt (with 77 votes) knocked out Environment Minister Michael Gove (75 votes). The pair will now battle for supports from 160k Conservative members around UK. Results of postal votes are expected to be announced in the week of July 22.

BoE Carney: Gatt 24 only applies if you have a withdrawal agreement with EU

BoE Governor Market Carney emphasized in a BBC interview that in event of no-deal Brexit, tariffs will “automatically” apply with EU. This is in contradiction to Boris Johnson’s claim that UK could use the so called “Gatt 24” rule to trade with EU under current terms. Carney also warned that no-deal, no-transition Brexit should be a choice taken with “absolute clarity”.

Carney explained that “the Gatt rules are clear… Gatt 24 applies if you have a [withdrawal] agreement, not if you’ve decided not to have an agreement, or you have been unable to come to an agreement”. And, “we should be clear that not having an agreement with the European Union would mean that there are tariffs, automatically, because the Europeans have to apply the same rules to us as they apply to everyone else.”

Also, he noted around three quarters of UK businesses have already done as much as they could for no-deal Brexit preparation. However, he emphasized “it doesn’t meant they are fully ready, in fact far from it”.

Japan PMI Manufacturing dropped to 49.5 in June, down from 49.8, and missed expectation of 50.0. Markit noted there was the fastest drop in new orders since June 2016. However, there was resilient output trend as manufacturers reduce backlogs of work to greatest extent since January 2013.

Tim Moore, Associate Director at IHS Markit said: “June survey data reveals a further loss of momentum across the manufacturing sector, as signalled by the headline PMI dropping to a three-month low. Softer demand in both domestic and international markets contributed to the sharpest fall in total new orders for three years. A soft patch for automotive demand and subdued client confidence in the wake of US-China trade frictions were often cited by survey respondents.”

BoJ left monetary policies unchanged yesterday. But Governor Haruhiko Kuroda pledged to ramp up stimulus “without hesitation” if the economy loses momentum. There are speculations that BoJ could act as early as in July, given that ECB and Fed have both turned more dovish this week. For the very least, BoJ could change its forward guidance and pledge to keep interest rates low longer.

Australia CBA PMI Manufacturing rose to 51.1 in June, up from 51.0. CBA PMI Services rose to 53.3, up from 51.5. Commonwealth Bank of Australia noted that output and new business both expanded at the steepest rates for seven months. Solid increase in outstanding workloads lead firms to raise their staffing levels for the second month in a row. Input costs jumped as sharpest pace since last November. But selling price inflation remained modest.

CBA Senior Economist, Gareth Aird said: “The economy has been in a soft patch, but there are some green shoots emerging. The combination of monetary policy stimulus, forthcoming tax rebates and strong employment growth has contributed to the sharpest lift in the index since late last year. While the overall level of the composite index signals modest growth, we are taking some comfort from the direction the index is heading.”

PMI data will be the major focus today. In particular, Eurozone PMIs will be watched closely. Further deterioration in sentiments will add to the case of more ECB policy easing. UK will release public sector net borrowing. Later in the data, Canada retail sales might help solidify the neutral stance of BoC and strengthen in Loonie. US will release PMIs and existing home sales too.

EUR/GBP is staying in consolidation from 0.8974 and intraday bias remains neutral first. With 0.8871 minor support intact, further rise is still in favor. On the upside, above 0.8974 will resume the rise from 0.8472 and target 0.9101 key resistance next. However, considering bearish divergence condition in 4 hour MACD, break of 0.8871 minor support will indicate short term topping and bring deeper pull back towards 55 day EMA (now at 0.8775).