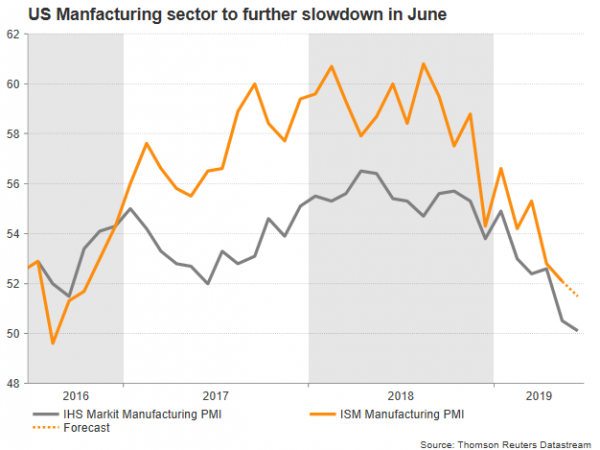 The manufacturing sector is remarkably important for the America’s technology and innovation leadership but also for the jobs market and thus any negative warning about the sector is a headwind to the economy and consequently to the dollar. The problem today is that the import tariff barriers imposed by the US government to China and other key economies have opened a can of worms in the industry, persuading the Fed to pause its rate hike campaign this year. On Monday at 1400 GMT, the closely watched survey of the Institute of Supply Management will likely (ISM) show that conditions deteriorated even further in June.

Following a disappointing reading in May, the ISM Manufacturing PMI reading is expected to be more bitter in June, with the index seen falling from 52.1 to 51.5, the lowest mark registered since October 2016. Such news, however, may not be very surprising to markets as the preliminary IHS Markit Manufacturing PMI for the month of June, has already warned investors about another slowdown, with the index falling to 50.1, closer to the 50 threshold that separates expansion from contraction.

– Note: our programmers have developed a profitable forex robot with low risk and stable profit!

A miss in forecasts could normally raise stakes for a rate cut as soon as July and weigh on the dollar on speculation the trade war could cut growth more sharply in the second quarter. The two-day G20 summit however that kicks off today in Osaka could change market sentiment early next week and hence alleviate the data impact on the currency. Even though the media has given little hope over a constructive meeting between Trump and Xi Jinping, a positive outcome could potentially postpone another exchange of tariffs and put the sides back on the discussion table. In this case, a weaker-than-expected ISM manufacturing PMI could have a softer negative impact on market rate projections and therefore on the greenback. Otherwise, should the talks prove fruitless, with China refusing to step back on key principles and the US unleashing new tariff hikes, the Fed may not wait long to slash rates if the data next week disappoint.

Resistance to watch for USDJPY could be the 108.20-108.73 area if the G20 summit eases concerns over a more aggressive trade war, reducing exposures to safe-haven assets. On the flip side, a combination of discouraging trade headlines and downbeat data could send the pair down to the 107.40-107.20 zone, while a deeper decline may also retest support within the 107-106.80 region.