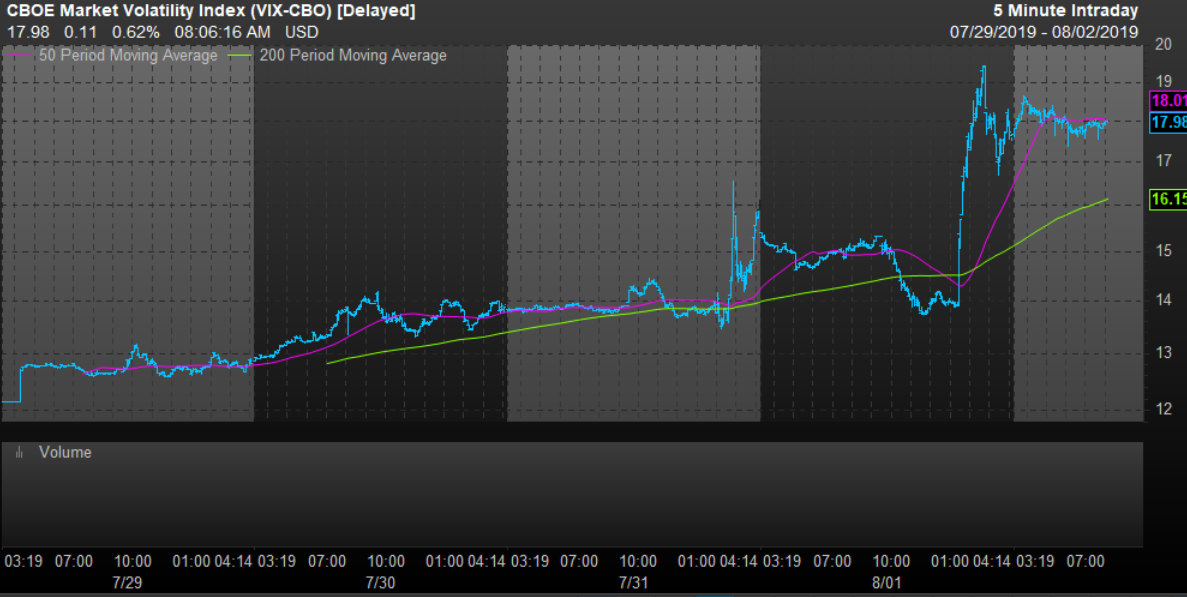 Traders work on the floor at the New York Stock Exchange.

Two words from Federal Reserve Chairman Jerome Powell and one tweet from President Donald Trump turned the market upside down rapidly this week. Some traders saw it coming and are ready to reap big money as the sell-off gains steam.

Big bets had been placed on a comeback in market volatility in the two weeks leading up to the Fed’s Wednesday policy meeting. In particular, traders had been loading up on call options in the Cboe Volatility Index, a measure of the 30-day implied volatility of U.S. stocks also known as the VIX or “fear gauge,” wagering on big price swings in the market.

“There has been large call buying in VIX ahead of [the] much anticipated FOMC announcement. It is especially interesting in that we haven’t witnessed as much bulky activity in VIX options since the great ‘Volpocalypse’ of 2018,” said Maxwell Grinacoff, a derivatives and quantitative strategist at Macro Risk Advisors, in a note earlier in the week. “Volpocalypse” refers to the event in February 2018 when the VIX doubled as the Dow Jones Industrial Average tanked more than 1,000 points twice in a week.

The fear gauge jumped the most since May to 16.12 on Wednesday after the Fed lowered interest rates for the first time in more than a decade. The spike occurred when Fed chief Powell took the podium at a news conference and said the rate cut was a “midcyle adjustment,” rather than the beginning of a lengthy cutting cycle, which disappointed the market and pushed the Dow down 280 points that day.

The VIX was triggered again Thursday this time by an afternoon Trump tweet where he abruptly ratcheted up the trade war with China by putting 10% tariffs on another $300 billion worth of Chinese goods, effective Sept. 1. The fear gauge popped to nearly 18 points on Thursday, while the Dow tanked another nearly 300 points. The selling continued Friday and the S&P 500 completed its worst week of the year down 3.1%. The VIX ended the week at 17.61.

Since July 16, about 1.3 million August/September VIX call contracts have been bought and the spike in market volatility is paying off for options traders, Grinacoff told CNBC.

Some traders had a big payday Friday, selling about 130,000 VIX August calls, but in the meantime, some 115,000 more VIX calls were bought on Friday alone, according to Macro Risk Advisors.

From the intensified trade war to uncertainties around the Fed’s monetary policy, it looks like tranquility won’t return to the market anytime soon. In fact, some on Wall Street are predicting more violent surges in the VIX are on the horizon.

“It looks increasingly likely to us that a jittery global equity market is on its way to seeing two volatility spikes in August, one early in the month and one towards the end of the month,” Nomura strategist Masanari Takada said in a note to clients Friday. The two spikes Nomura predicts do not include the jumps in the VIX this week.

Hedge funds have started selling their long positions in U.S. stocks, which creates a catalyst for more volatility, Takada said. Additionally, there is an emerging pattern in the data “indicative of a renewed economic slowdown in China,” which sets the stage for more chaos, the analyst said.

“Investors may do well to refrain from bargain-hunting in global equities until the market regains its footing after an August that we expect will be characterized by a bearish tilt and a pair of volatility spikes,” Takada said.