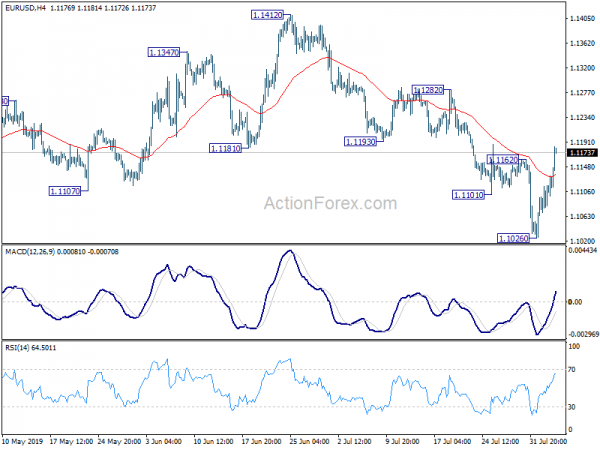 Global markets are dragged down by the steep decline in the Chinese Yuan today. Major European indices are all in deep red today, following the selloffs in Asia. DOW future is currently down over -1.4% or -370 pts. Treasury yields also suffer with German 10-year yield breaking -0.5 handle again. US 10-year yield is also sent below 1.8 handle. In the currency markets, Swiss Franc and Yen are among the strongest for today so far. Euro is a surprise as second strongest, probably as markets are expecting currency war between US and China. Meanwhile, Australian Dollar is the weakest one, followed by New Zealand and then Canadian.

Chinese Yuan dropped sharply in Asian session, with USD/CNH hitting as high as 7.1111, staying comfortably above psychologically important 7 handle. The decline firstly argues that the Chinese government is seeing no need to keep Yuan exchange rate stable. Further, it’s a sign that Beijing is weaponizing the Yuan as a tool to offset the impact of tariffs in trade war.

Trump accused China for currency manipulation today, and with the same tweet, he also urged Fed to “listen” He said “China dropped the price of their currency to an almost a historic low. It’s called ‘currency manipulation.’ Are you listening Federal Reserve? This is a major violation which will greatly weaken China over time!” But it’s unsure what “historic low” he referred to.

On the other hand, China dismissed Trump’s claim that the country didn’t buy US agricultural products. A National Development and Reform Commission (NDRC) was reported saying that such accusation was “groundless”. The official noted China bought 130,000 tonnes of soybeans, 120,000 tonnes of sorghum, 60,000 tonnes of wheat, 40,000 tonnes of pork and products, and 25,000 tonnes of cotton from the United States between July 19 and August 2.

Also, the NDRC official also said China purchased 75,000 tonnes of hay, 5,700 tonnes of dairy products, 4,500 tonnes of processed fruits, and 400 tonnes of fresh fruits from the United States during the same period.

Eurozone Sentix dropped to -13.7, spectre of recession is going around

Sentix warned that “the spectre of recession is going around.” It also said number of economists merely dismissed the deterioration as a “mood correction”. The current “manufacturing deterioration” is referred to as a “recession in the manufacturing sector” only, with “service sectors excluded. And it’s a “big mistake” from Sentix’s view.

Sentix said, “the former world champion exporter is feeling the effects of the backward roll of globalisation.” It also complained that the “entire political spectrum in Germany is discusses climate issues but “completely overlooks the fact that the economic climate is fading”.

UK PMI Services recovered to 51.4 in July, up from 50.2 and beat expectation of 50.4. That’s already the highest level since October 2018 even though rate of expansion remained subdued overall. Markit noted there was modest increase in service sector output. There was rebound in new work, helped by export sales. But business expectations eased to a four-month low.

Chris Williamson, Chief Business Economist at IHS Markit: “The latest PMI numbers are indicative of the economy stagnating at the start of the third quarter after indicating a 0.1% decline in the second quarter. Even growth in the service sector remains worryingly subdued, constrained by a marked fall in business services activity, where the rate of decline in July has been exceeded only once in the past ten years. The best performing sector was consumer services, highlighting how the economy remains dependent on consumer spending to avoid contraction.”

Dr. Zhengsheng Zhong, Director of Macroeconomic Analysis at CEBM Group said: “In general, China’s economy showed signs of recovery in July, thanks to large-scale tax and fee cuts, as well as ongoing support from monetary policy and government-driven infrastructure investment. It remains to be seen if the economic recovery can continue amid trade fictions with the U.S. and rigid regulations on the financial sector and debt levels. The recovery in July suggests that China’s economic slowdown is under control.”

Australia AiG Performance of Services dropped sharply to 43.9 in July, down from 52.2. The -8.3 pts fall is the largest monthly decline since July 2018. Reading below 50 signaled a return to contraction, as trading conditions for many businesses dived again.

Looking at some details, among the business-oriented sectors, only wholesale trade reported positive results. Among the consumer-oriented segments, the large ‘health, education & community services’ sector was strongest. The retail trade sector continued to perform very weakly.

Following two consecutive rate cuts, RBA is widely expected to leave the cash rate unchanged at 1.00% tomorrow. Incoming economic data since the last meeting have also supported the pause. Yet, given the aggressive target in the longer-term unemployment rate, downside risks to growth and ongoing uncertainty in the US- China trade war, another rate cut is still likely in 4Q19. We expect the members to open the door for further monetary easing at the meeting. More in RBA Preview – Pausing (Not Ending) after Two Consecutive Rate Cuts.

In the bigger picture, current development suggests that down trend from 1.2555 (2018) is in progress and extending. Prior rejection of 55 week EMA also maintained bearishness. Further fall should be seen to 78.6% retracement of 1.0339 to 1.2555 at 1.0813. Decisive break there will target 1.0339 (2017 low). On the upside, break of 1.1412 resistance is needed to indicate medium term bottoming. Otherwise, outlook will stay bearish in case of rebound.