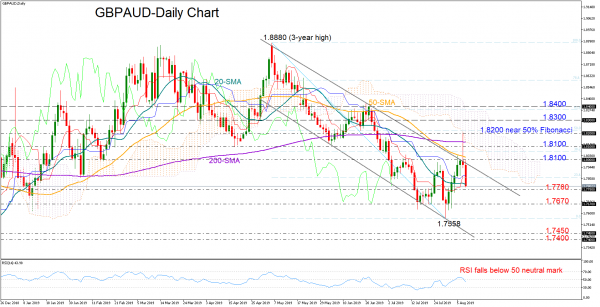 GBPAUD attempted forcefully to exit the descending channel and breach at once the 1.8200 level and the lower bound of the Ichimoku cloud but its efforts proved fruitless, with the price slipping back to the 1.78 hurdle on Thursday.

The RSI has pierced its 50-neutral mark to the downside, endorsing the current negative momentum in the price. Yet the weakness may not persist for long if the red Tenkan-sen manages to move above the blue Kijun sen. Hence the short-term risk is currently looking bearish-to-neutral.

On the downside, traders could initially look for support around the 1.7780 level that was repeatedly tested the past few weeks. The 1.7670 barrier could also keep the bears busy before the spotlight turns to the 1.7558 bottom, while lower, the door would open for the 1.7450-1.7400 zone.

Moving north, the price could revisit the 1.80 mark, where any break may trigger another upturn towards the 1.8100 obstacle. A sustained move beyond the latter, would resume neutrality in the bigger picture, bringing the 1.8200 mark and the 50% Fibonacci of the 1.8880-1.7558 bearish wave back into play. Higher, the 1.83-1.84 congested zone could be the next target.

In brief, GBPAUD could experience a bearish-to-neutral trading in the short-term, while in the medium-term, the pair needs a rally above 1.8100 to resume a neutral profile.