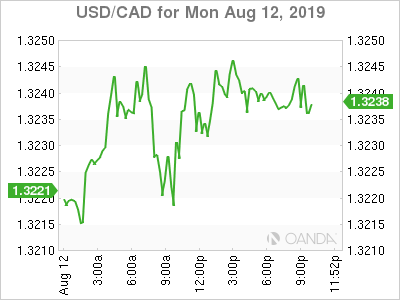 The Canadian dollar lost 0.23 percent on Monday. Oil prices could not hold the gains from the Asian session and during the North American session were almost flat. Gold continues to shine as a safe haven alongside with the Japanese yen and the Swiss franc.

Job data was lower than expected on Friday and could add to the mounting pressure on the Bank of Canada (BoC) to slash the benchmark interest rate. The Fed reversed its tightening monetary policy in January and cut its rates in July.

The breathing room available to the Canadian central bank is quickly evaporating and at the beginning of the year the BoC could keep in the sidelines for most of 2019, but as the trade dispute between the US and China remains the central bank could be forced to step in to avoid the economy losing momentum.

Oil prices recovered on Monday after OPEC members have made statements showing their willingness to cut production even further. The OPEC+ extended in production agreement in July, but with a worse trade scenario the group has a lot to do discuss but little in the way of actual actions the group could take to keep oil from falling further.

Oil continues to be sensitive to trade war rhetoric. A surprise buildup in the United States added extra pressure to crude prices. Saudi Arabia is willing to do more to prevent a free fall, but hard to imagine what that would look like. The prolonged trade war has been a negative factor for global growth estimates.

Gold rose on Monday as it still the top choice for investors as a safe haven. The yellow metal has risen as investors are seeking refuge due to geopolitical anxiety as Brexit, US-China trade war and Italian elections loom over the global economy.

Gold rose 1.2 percent on Monday and is once again trading above the $1,500 price level.

Central banks around the globe are preparing to keep rates lower and dovish rhetoric continues to be the norm. Monetary policy makers have gotten out of the metal’s way as three CBs slashed rates last week. The Fed could follow suit in September with a 25 basis points cut. Central banks representatives from around the world will attend the Jackson Hole summit hosted by the Fed from August 22 to the 24 in Wyoming.

Trade uncertainty remains high despite the Trump administration walking back some aggressive comments, but with a September 1 deadline for higher tariffs on consumer facing Chinese goods the yellow metal will continue to be bid.

Equities suffered from trade war anxiety as investors are selling riskier assets despite the combined efforts from central banks around the globe. Rates have been lowered and more to come as monetary policy makers seek to boost growth, but geopolitical risk events keep putting pressure on stocks as a trade war cease fire is looking unlikely.

Stocks had a volatile end of the week having to digest trade comments from US President Donald Trump and geopolitical risk rising in the Asian and European sessions. Overall the stock market rebounded last week as China although defiant in matching the US tariffs has kept the yuan under close watch to avoid triggering a currency war.

Investor confidence has wavered as the US-China trade dispute has ramped up, but global central banks have cut rates and keep signaling further cuts to avoid the global economy falling into a recession.

Headwinds remain strong as a deal in the short term between the US and China is a long shot and that is what the Friday trading session reflected.

Equities remain sensitive to trade headlines even as some of the initial shock announcement of a new offensive to be launched on September 1 has worn off, but with no clear olive branch being offered by either side the trade dispute has no end in sight putting downward pressure on equities.

Previous: Investors are rushing into bonds, like they’re the new ‘Beyond Meat’
Next: Forex Steady Despite Risk Aversion, UK Job Data Watched