Risk aversion stays in Asia after the -3% crash in Dow overnight. More importantly, treasury yields took another dive on recession fears. US 30-year yield even drops through 2% handle in Asia and hit as low as 1.964. In the currency markets, though, Australian Dollar rises generally after better than expected job data. New Zealand and Canadian Dollar shrug risk aversion and recover generally. At this time of writing, Sterling and Dollar are among the weakest for today, awaiting important data ahead.

Technically, 1.1133 minor support in EUR/USD is a key focus today. Firm break there should indicate completion of rebound from 1.1026 and larger down trend might be resuming. Ideally, that should be accompanied by firm break of 1.0841 in EUR/CHF to confirm over weakness in Euro. Yen crosses will also be eyeing recent lows, in particular 105.04 in USD/JPY, 117.51 in EUR/JPY and 126.54 in GBP/JPY.

US President Donald Trump appeared to be putting human rights condition in Hong Kong as a prerequisite of a trade deal with China. He tweeted that “Of course China wants to make a deal. Let them work humanely with Hong Kong first!” Trump repeated his usual praise of Chinese President Xi Jinping as a “great leader”, and a good man in a “tough business. He even said he has “ZERO doubt” Xi wanted to “quickly and humanely” solve the Hong Kong problem. And he even called Xi for a “personal meeting” on the issue.

Trump’s comment came after State Department spokeswoman said US was “deeply concerned” about reports of paramilitary movements along the Hong Kong border. Additionally, she urged the Hong Kong government to respect “freedoms of speech and peaceful assembly”. She also noted that recent protests reflected “broad and legitimate concerns about the erosion of Hong Kong’s autonomy.” Further, “the continued erosion of Hong Kong’s autonomy puts at risk its long-established special status in international affairs,” she said.

UN Human Rights Office also said in a statement that there were “credible evidence of law enforcement officials employing less-lethal weapons in ways that are prohibited by international norms and standards” in handing the protests in Hong Kong that lasted for more than two months. For example, “officials can be seen firing tear gas canisters into crowded, enclosed areas and directly at individual protesters on multiple occasions, creating a considerable risk of death or serious injury.”. UNHR also urged the Hong Kong Government to ensure “response by law enforcement officials to any violence that may take place is proportionate and in conformity with international standards on the use of force, including the principles of necessity and proportionality.”

RBA Debelle: Technology dispute could have larger impacts than tariffs

RBA Deputy Governor Guy Debelle said in a speech today that the direct effects of US-China tariffs “has not been all that large”. However, the larger impact has been the uncertainty generated by the dispute. The uncertainty takes “two forms”. Firstly, there was uncertainty about the “size and incidence” of tariffs. Secondly, it’s unsure how “technology dispute” will be resolved.

Also, he said current trade dispute would have a “large and long-lasting impact” on the “system of rules-based trade”. And, “The China–US dispute casts serious doubt on that. We can also see that manifest in the US–Europe trade issues, as well as those between South Korea and Japan.” Also, “trade is being used as the bargaining tool of choice, including for issues that don’t have much to do with trade.”

The better than expected job growth should keep RBA on sideline in September. However, unemployment continues to be stuck at 5.2%. There is no sign of falling towards RBA’s natural rate of 4.5%. The central bank will still need more easing ahead to push down unemployment rate so as to push up inflation to target.

Also from Australian, consumer inflation expectation rose to 3.5$ in August, up from 3.2%.

UK retail sales is the major focus in European session. Swiss will release PPI. Later in the day, a long list of US economic data will be released. Retail sales will catch most attention. But Empire state manufacturing, Philly Fed survey, industrial production and jobless could also be market moving. Non-farm productivity, NAHB housing index and business inventories will also be featured. 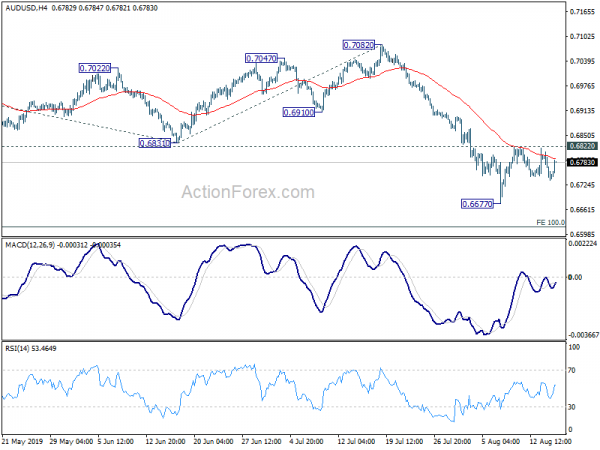 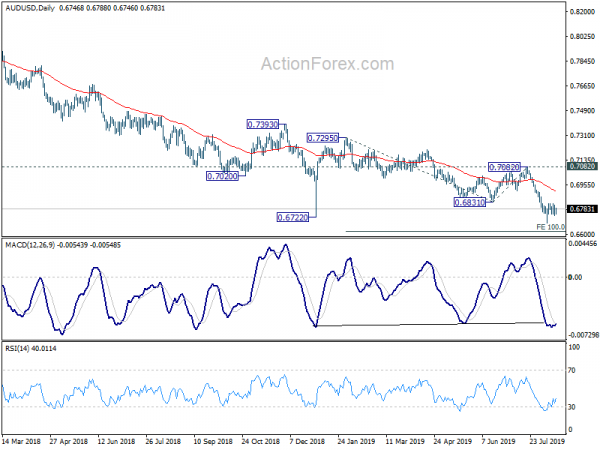