Asian markets turned mixed after US stocks stabilized overnight. Treasury yields remain pressured though, as 10-year JGB yield hit the lowest level since 2016. In the currency markets, Dollar strengthens mildly today after a Fed dove dismissed an emergency rate cut. Though, Australian Dollar is the strongest one. On the other hand, as markets stabilized, Swiss Franc, Euro and Yen are the softest for today. For the week as a whole, Euro is the weakest one followed by Canadian. Sterling is strongest on corrective recovery, followed by Aussie.

Technically, more downside looks likely for Euro. EUR/USD is heading back to 1.1026 support. EUR/JPY is also eyeing 117.51. Break of there levels could prompt selling in EUR/GBP and EUR/AUD too. Downside momentum in EUR/CHF is so far weak, but we won’t be surprised to see it picks up again before weekly close. One important point to note is that recoveries in GBP/USD and GBP/JPY this week are clearly corrective looking. That is, break of 1.2014 and 126.54 temporary lows should be seen sooner or later.

St. Louis Fed President James Bullard said yesterday the US economy is sound despite trade uncertainty. And the “numbers here seem pretty good…2 percent growth. Nice job market. Low inflation. Good consumption growth”. The world is “in the middle of a global slowdown” and policymakers are “just going to have to assess how this is going to affect the U.S. economy.”

He also tried to talk down recent stock market declines. While the “steep selloff was big”, the market is “way up this year”. And, “even if nothing else was going on, you might have expected some repricing there.” He also added that “any (yield curve) inversion that is going to send a bearish signal for the U.S. economy would have to be sustained over a period of time,”

Bullard also rejected the idea of an inter-meeting emergency rate cut. He said “The timing is never critical on these things. A couple of weeks one way or another probably doesn’t matter. What matters is that you are in the right zone for interest rates and that you are reacting appropriately to incoming data.”

Minneapolis Fed President Neel Kashkari described the economic outlook as “mixed” and expressed his support for further rate cuts. He noted that trade tensions are making businesses cautious. The steep stock market fall and yield curve inversion is “an indicator that people are nervous.”

For September FOMC meeting, Kashkari is “leaning towards the camp of, ‘yes we need to give more stimulus to the economy, more support, we need to continue the expansion and not allow a recession to hit us.”

ECB Governing Council member Olli Rehn said yesterday, “there is a certain weakening of the economic outlook for Europe in the last couple of months”. And, the backdrop “justifies taking further action in monetary policy, as we intend to do in September.”

He added, “it’s important that we come up with a significant and impactful policy package in September” monetary policy meeting. He added, “when you’re working with financial markets, it’s often better to overshoot than undershoot, and better to have a very strong package of policy measures than to tinker.”.

On the composition of the stimulus, Rehn said A package of several measures “has a stronger impact than sequencing various measures over time,” due to synergies between different policy tools. Currently, markets are expected a -10bps cut to the key interest rate from current -0.4%. Also, ECB could restart asset purchase program with fresh EUR 50B per month buying.

RBNZ Orr: We look ahead – not behind

RBNZ Governor Adrian Orr issued a statement to defend the central bank’s decision to the surprised 50bps rate cut earlier this month. That was a response to an opinion piece of BusinessNZ chief executive Kirk Hope titled: ‘Business concerned by blurring of Government and Reserve Bank policy”. Hope criticized that “last week’s OCR cut was less predictable because it did not seem to relate to current inflation or unemployment data.”

Orr explained that the central banks’ decisions are “forward-looking and transparent”. Also, it’s “operationally independent”, with clear mandates and goals. He emphasized policymakers “cannot, and do not, set the OCR based on current or historical inflation and employment outcomes.” And, “we look ahead – not behind”. He added that “global and domestic low inflation expectations sit as a key reason for lower global and domestic official interest rates.”

New Zealand BusinessNZ Performance of Manufacturing Index (PMI) dropped -2.9 pts to 48.2 in July. That’s the first contraction reading in 82 months and the lowest reading since August 2012.

BusinessNZ’s executive director for manufacturing Catherine Beard said that concerns around the direction of activity over the last six months has inevitably led to the sector falling into decline.  BNZ Senior Economist, Craig Ebert said that “while July’s result is no dead-set that the economy at large is contracting, the shrinkage is certainly something to take note of”.

WTO Goods Trade Barometer dropped to 95.7, all components below trend

WTO’s Goods Trade Barometer dropped to 95.7 as of August 15. That’s slightly down from 96.3 reported in the quarterly report in May. The barometer suggests that below-trend expansion in merchandise trade will persist in the coming months.

Looking at the details, sustained weakness in the barometer index was driven by below trend values in all component indices. The international air freight (91.4) and electronic components (90.7) indices showed the strongest deviations from trend, with readings well below previous releases. Indices for export orders (97.5), automobile production and sales (93.5) and agricultural raw materials (97.1) all remained below trend although they show some signs of having bottomed out. Only the index for container shipping (99.0) was close to the baseline value of 100.

The economic calendar is not too business today. Eurozone will release trade balance. Canada will release international securities transactions. US will release housing starts, building permits and U of Michigan consumer sentiment.

GBP/USD is staying in consolidation from 1.2014 and intraday bias remains neutral for the moment. With 1.2209 minor resistance intact, further decline is expected. On the downside break of 1.2014 will target 1.1946 low first. Firm break there will target 100% projection of 1.4376 to 1.2391 from 1.3381 at 1.1396. On the upside, break of 1.2209 resistance will suggest short term bottoming. In this case, lengthier consolidation should be seen first before another decline. 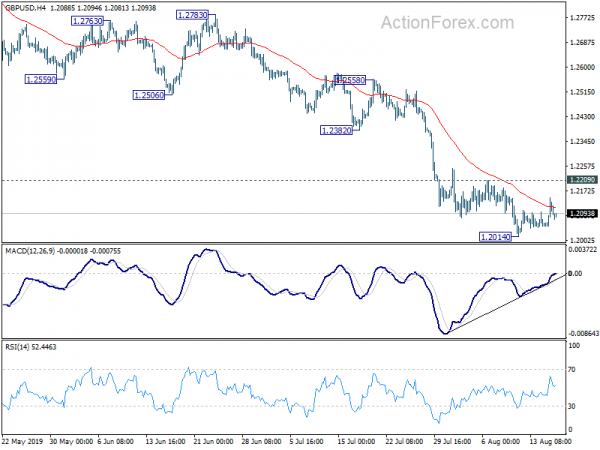 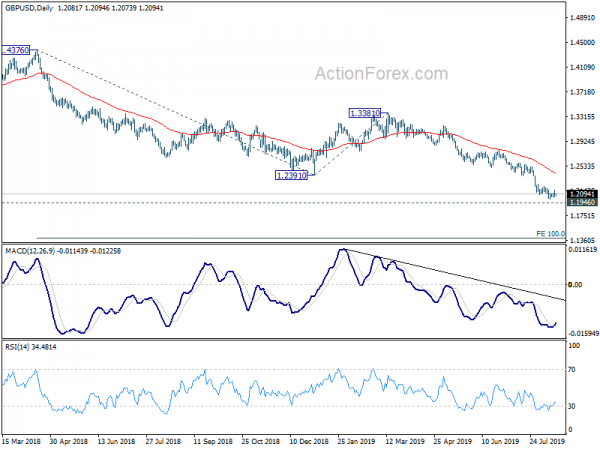