Sterling drops broadly today as comments from UK and EU suggested that there is no compromise on Brexit any time soon. Euro is also pressured as German is back pressing -0.7 handle. Yen jumps again and is trading as the strongest one with fading risk appetite. Aussie follows after RBA minutes suggested that it will stand pat in September. Though, most pairs and crosses are holding inside familiar range. There is no decisive break out yet.

Technically, GBP/USD and GBP/JPY weaken notably today. Corrective recoveries from 1.2014 and 126.54 started to lose momentum. Retest of these temporary lows could be seen soon. EUR/JPY could have another take on 117.51 support and break will resume recent down trend. USD/JPY also lost upside moment ahead of 107.09 resistance. Deeper fall could be seen back to retest 105.04 low if risk aversion intensifies.

Prime Minister Boris Johnson reiterated in a letter to European Council President Donald Tusk that the Irish backstop was unacceptable. He said, “it presents the whole of the UK with the choice of remaining in a customs union and aligned with those rules, or of seeing Northern Ireland gradually detached from the UK economy across a very broad range of areas”. And, “both of those outcomes are unacceptable to the British government.”

Instead, Johnson said both the UK and EU have already agreed that “alternative arrangements” can be part of the solution. And he said: “I propose that the backstop should be replaced with a commitment to put in place such arrangements as far as possible before the end of the transition period, as part of the future relationship. I also recognise that there will need to be a degree of confidence about what would happen if these arrangements were not all fully in place at the end of that period. We are ready to look constructively and flexibly at what commitments might help, consistent of course with the principles set out in this letter.”

Separately, UK Conservative Party co-chairman James Cleverly said UK will be leaving EU on October 31. He noted, “the recognition of that will help the EU negotiators understand what they need to do.” He also emphasized “the decision as to whether we leave with or without a deal is largely now in the hands of European Union negotiators”. And he urged EU to show some flexibility over Irish backstop.

In response to UK Prime Minister Boris Johnson’s letter, European Council President Donald Tusk reiterated that the backstop is an “insurance” to avoid a hard Irish border” until an alternative is found. . And, “those against the backstop and not proposing realistic alternatives in fact support reestablishing a border. Even if they do not admit it.”

European Commission spokesperson Natasha Bertaud also said Johnson’s letter “does not provide a legal operational solution to prevent the return of a hard border on the island of Ireland”. She reiterated that the backstop is the “only means identified so far by both parties to honor this commitment” of avoiding hard Irish border.

UK CBI monthly Industrial Trends Survey indicated that manufacturing output stabilized August. 15% of manufacturers reported total order books to be above normal, and 28% said they were below normal, giving a balance of -13% (from -34% in July). This month’s figure is line with the long-run average (-13%).

Anna Leach, CBI Deputy Chief Economist, said: “Despite signs of stabilisation in the data this month, UK manufactures remain on the receiving end of a double whammy: the slowdown in the global economy and Brexit uncertainty. Trade tensions between nations such as China and the US only exacerbate the demand uncertainty facing UK manufacturers.

“As we get closer to October, it’s crucial that the new Prime Minister secures a Brexit deal ahead of that deadline and gets on with pressing domestic priorities, from improving our infrastructure to fixing the apprenticeship levy.”

In the minutes of August 6 RBA policy meeting, the central bank noted that “an extended period of low interest rates” would be required. And after two back-to-back rate cuts in June and July, it’s “appropriate to assess developments in the global and domestic economies before considering further change to the setting of monetary policy”. And members would “consider a further easing of monetary policy” if needed. The minutes are in-line with expectations that RBA would stand pat in September, before taking more actions later in the year.

Globally, RBA noted that “escalation of the trade and technology disputes had increased the downside risks to the global growth outlook”. And, “uncertainty around trade policy had already had a negative effect on investment in many economies.”  Low inflation provided central banks with “scope to ease” further.

Domestically, growth in Australia had been “lower than expected” in the first half but its expected to “strengthen gradually” to 2.75% over 2020, and then around 3% over 2021. Developments supporting the outlook include lower interest rates, higher household income growth, exchange rate depreciation, positive resources sector investment, some stabilization of housing market, and ongoing high levels of infrastructure investment. Risks are tilted to the downside in the near term, but more balanced later in the forecast period. 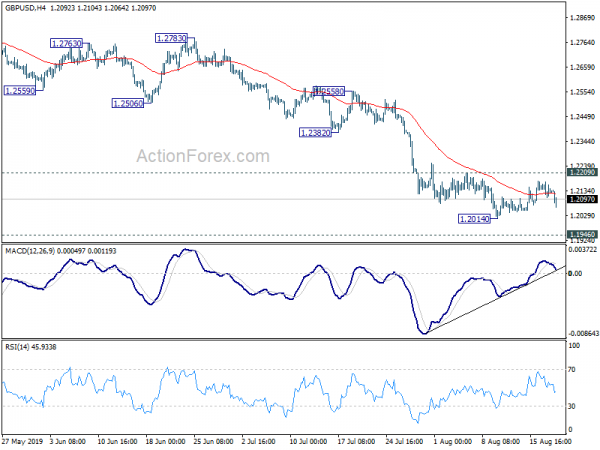 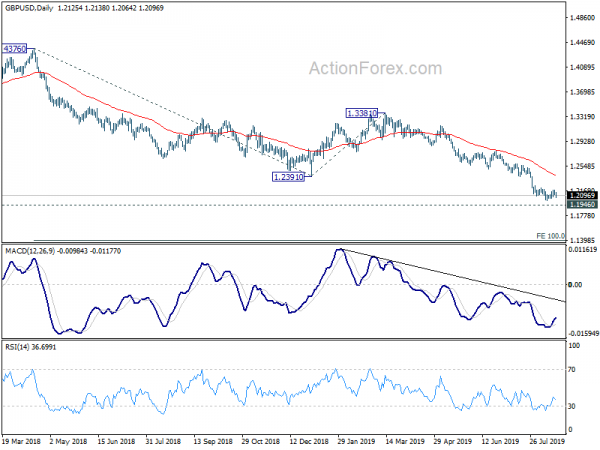