Last week started with anticipation of Fed Chair Jerome Powell’s Jackson Hole speech, but ended with shocked escalation of US-China trade war. Risk aversion should continue to dominate the markets this week, as hard-line rhetorics are expected from both sides. Indeed, they look moving away from a September trade meeting, rather than towards it. Sterling ended the week as the strongest on hope that UK Prime Minister Boris Johnson could find alternatives on Irish backstop that avert no-deal Brexit. Yen and Swiss Franc were among the strongest naturally in risk averse environment. Though, Euro also firmed up against most, with help from the rebound against Dollar. Commodity suffered most as led by Australian and New Zealand Dollars.

Euro’s path will be an interesting one to watch this week. Firstly, it’s clear that ECB is preparing for a package of monetary stimulus for September meeting. Secondly, recent data indicates no sign of recovery in Germany’s economy. It could also be argued that Eurozone economy, which is already weak, won’t be immune from any US-China trade war escalation. Thirdly, Euro is facing Italian political turmoil, as well as risk of no-deal Brexit. So, we’re not too convinced by EUR/USD’s rebound. And selloff in EUR/JPY and EUR/CHF could drag EUR/USD down ahead. We’ll see how it goes.

US-China trade tensions had an abrupt escalation on Friday after China announced retaliation tariffs on USD 75B US imports. Additional tariffs of 5% or 10% will be imposed on a total of 5078 products lines originating from US. Goods include agricultural products, crude oil, small aircraft and cars. The first batch will take effect on September 1. Others will take effect on December 15.

Later in the day, US President Donald Trump responded with two series of furious tweets. The net results were tariffs on USD 250B in Chinese imports will be raised from 25% to 30% on October. Separately tariffs on USD 300B in Chinese products will be raised from 10% to 15%, in two tranches starting September 1 and December 15. China typically responded in strong words on Saturday warning the US “not to misjudge the situation or underestimate determination of the Chinese people. ”

This round of escalation carried some significant implications. Firstly, the bar of 25% was broken, signaling tariffs could rise rather quickly further. Secondly, Trump said he “ordered” American companies to immediately start looking for alternatives. Thirdly, Trump also said that “we don’t need China and, frankly, would be far better off without them”. Both are seen as a big push towards decoupling of the two countries. And, that could mark a formal start of the stage of US-China cold war.

Traders pared back some of theirs bets on a September Fed cut after a number of policymakers expressed their disagreement on it. While Fed Chair Jerome Powell’s Jackson Hole speech was rather uninspiring, he dropped a dovish hint with it. He noted the three weeks since July FOMC meeting “have been eventful”. Developments include new tariffs on China, further evidence in global slowdown. Additionally, there were geopolitical events including “growing possibility of a hard Brexit, rising tensions in Hong Kong, and the dissolution of the Italian government.”

Current trade war escalation and intensification of other risks could give Fed policymakers enough reason to have another insurance cut next month. As of now, Fed fund futures are pricing in 100% chance of a -25bps cut to 1.75-2.00%. Though, pricing of -50bps cut receded somewhat from a week ago.

Dollar index dropped sharply on Friday to as low as 97.16 last week as the correction from 98.93 extended. For now, there is no clear sign of bearish reversal yet. As long as 96.67 support holds, another rise through 98.93 is still in favor. But even so, momentum would likely be weak as dragged down by decline in USD/JPY, on the back of risk aversion and falling yields. However, break of 96.67 support will be a strong sign of reversal and target 95.3 support for confirmation. DXY’s fate will depend on the next move of EUR/USD.

EUR/JPY’s down trend resumed last week and hit as low as 117.26. Initial bias is back on the downside this week for 114.84 key support next. On the upside, above 118.33 minor resistance will turn intraday bias neutral and bring more consolidations, before staging another fall. 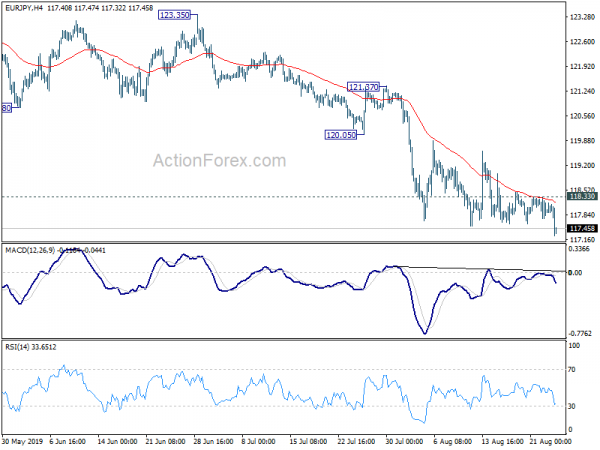 In the bigger picture, down trend from 137.49 (2018 high) is still in progress. It’s seen as a falling leg of multi-year sideway pattern. Deeper fall could be seen to 109.48 (2016 low and below). On the upside, break of 123.35 resistance is needed to the first sign medium term reversal. Otherwise, outlook will remain bearish in case of strong rebound. 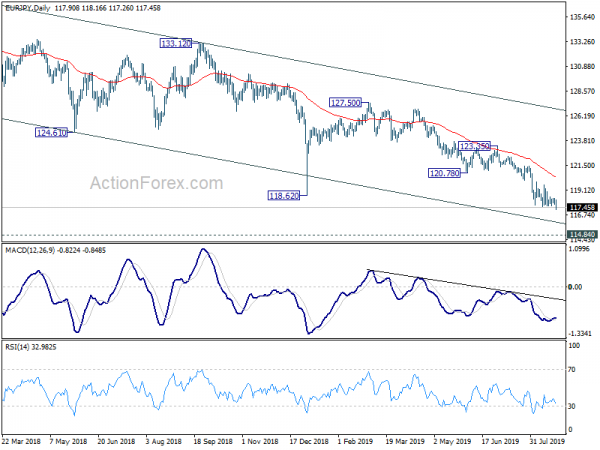 In the long term picture, EUR/JPY is staying in long term sideway pattern, established since 2000. Fall from 137.49 is seen as a falling leg inside the pattern. Break of 118.62 should now extend this falling leg through 109.48 (2016 low). With EUR/JPY staying below 55 month EMA, this is the preferred case. 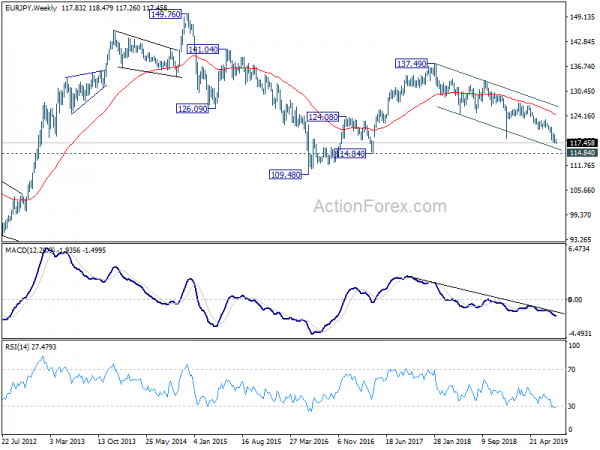 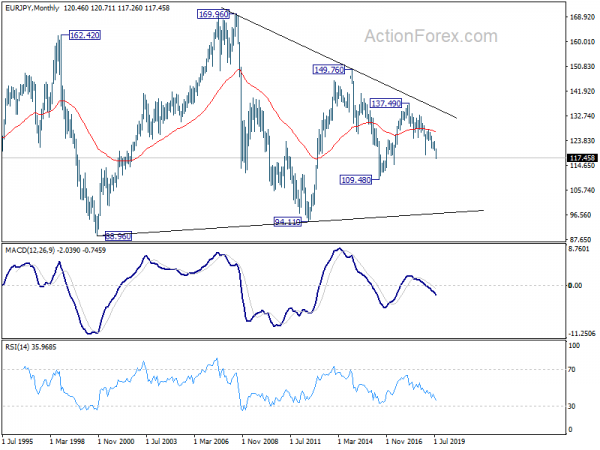