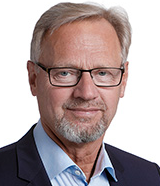 Jyske Bank announced on August 20 that it will begin charging affluent retail customers up to 60 basis points on deposits above DKK7.5 million ($1.12 million).

More attention than usual has suddenly focused on the third largest bank in Denmark, because chief executive Anders Dam, in an interview broadcast on the bank’s investor relations site, refused to rule out extending negative deposit rates to regular retail customers.

Negative rates are hardly new. The Danmarks Nationalbank was one of the first central banks to implement them in July 2012 amid fears that the spillover from the eurozone crisis could drive up the Danish krone.

However, what once seemed like a temporary phase of unconventional monetary policy now starts to look permanent. Extraordinary accommodation has prompted no self-sustaining recovery, not even in the US where the Fed is now cutting rates once more, much less the eurozone.

“Market expectations during the summer point to negative interest rates for the next eight years,” says Dam. He explains: “Personal deposits yield us a big loss so we have to act.”

Across Europe, inside and outside the eurozone, banks are wrestling with how to charge customers for the burden of accepting their money on deposit, which once they treasured as a stable form of funding.

James von Moltke, Deutsche Bank’s chief financial officer, pointed out to analysts on its second-quarter earnings call legal restrictions against passing on negative rates, but account or deposit fees offer a way round this.

“Obviously, we’re working to offset the impact of interest rates, especially now if we and the industry face a period of lower-for-longer rates, and that spans a wide variety of actions,” says Von Moltke.

He goes on to mention possible “implementation of fees against accounts that no longer essentially pay for themselves based on the liabilities, or doing so by client segment, where there is more opportunity to pass on negative rates to clients”.

Negative deposit rates at the European Central Bank (ECB) passed their fifth anniversary in June this year. On an annualized basis, eurozone banks are paying €7.6 billion to the ECB on surplus deposits, with German, French and Dutch banks paying 70% of these charges between them.

With the economic outlook darkening once more, the pressure to charge customers for storing the deposits that banks once – it seems so crazy now – paid them for is intensifying across 20 countries.

The next most-affected is Switzerland, where the Swiss National Bank now charges 75bp on surplus deposits, almost twice the 40bp the ECB charges, albeit offset by an exemption on up to 20-times Swiss banks’ minimum reserve requirement.

Charging customers for deposits instead of paying for them is simply another way of saying a bank doesn’t want deposits.

Euromoney thinks back to an interview two years ago with Stuart Gulliver as he came towards the end of his time as chief executive of HSBC.

“People have criticized us for keeping advances too low and deposits too high,” Gulliver told us then. “When we could only park them in the UK for zero at the Bank of England and so set deposits rates at zero, customers still gave us more because they saw that as an indication of strength.

“But I won’t turn deposits away. I don’t ever want to tell customers: ‘We don’t want your money this week: come back next week, we might want it then.’”

One way to keep customers, of course, and to offset the loss of holding their deposits is for banks to operate an open platform that allows those customers to place funds into the savings products of other banks that might actually pay for them.

Close Brothers is a longstanding customer that has distributed savings products in Germany through Deposit Solutions as a low-cost distributor. It clearly has one eye on Brexit and how to secure funding for its Irish loan book.

Switzerland is home to big deposit pools in euros and US dollars as well as in Swiss francs.

It’s hard to think of a better example of how changing pricing dynamics and new technology are transforming the bank deposit market than a UK bank raising euro deposits through a non-bank platform in Switzerland.

And on the same day that Jyske Bank began inviting affluent customers to meetings to discuss charges on their deposits above DKK 7.5 million, Deposit Solutions announced that its latest partner bank in Germany will be Merck Finck Privatbankiers, whose advisers will now offer their clients access to deposits of third-party banks.

“We work with specialist advisers servicing high-net-worth customers and even for them, handling these customers’ excess liquidity has become a challenge.

“We have signed agreements with three other partners operating in the high-net-worth space that we hope we might announce publicly before the end of the year.”

However, the market where Deposit Solutions has made the biggest inroads – intermediating €14 billion of deposit flows on two B2C channels alone, not even counting transactions between partner banks incorporating the same underlying technology directly – is in smaller deposits protected by national insurance schemes.

For high street banks in Germany and elsewhere, those deposits were once a key battleground. Challenger banks, such as ING, typically won customers with higher rates on deposits and then sought to cross-sell additional services that were more profitable.

Open banking is a way for incumbents to cede ground while retaining a primary relationship with the customer.

“Non-interest bearing balances on prime bank accounts where households take their salary and pay bills are not really out in the deposit market, where the average ticket size our platforms intermediate is for €40,000,” says Sievers.

“Our platform is a means for banks to defend what they really want to keep, which is the customer relationship, while passing on some business that was once quite competitive and may now actually be costly.”

He adds: “This has always made a lot of sense. But negative interest rates are now increasing the sense of urgency at some banks to make this a higher priority.”

Sievers says: “Deutsche Bank started offering its deposit marketplace to 300,000 customers of its brokerage execution arm maxblue, then gradually rolled it out to eight million online banking and branch customers. So, we have a good track record of how this meets its key performance indicators.”

However, while Deposit Solutions offers an intriguing technical solution for banks to lessen the financial burden of customer deposits without driving customers away, it is hardly a silver bullet.

Behind all the anxiety over rates going further into negative territory, slowing growth in the next 18 months and market falls lurks the horror of deflation.

At Jyske Bank, Dam is clearly worried about Danish customers selling out from investments in markets at home and abroad through the rest of this year amid concerns about recession and a crash.

“If Danes get nervous and sell their investment units in our foreign branches, billions will roll back to Denmark,” Dam says. And that is why the bank is drawing a line.

“If that money flows back in large sums, it will be at a negative interest rate if it ends up in a demand deposit at Jyske Bank,” says Dam.

If a recession comes and credit costs rise, he doesn’t want to be losing money both on deposits and on loans.

Of course, if deflation should take hold, cash is king. And for investors who expect that outcome, or just see it as enough of a risk to be worth hedging, raising cash would be entirely rational.

Dam and every other bank chief executive would have much bigger things to worry about, including overwhelming defaults and collapsing values on the banks’ own investments.

So, let’s hope it doesn’t come to that and give one cheer for negative rates.