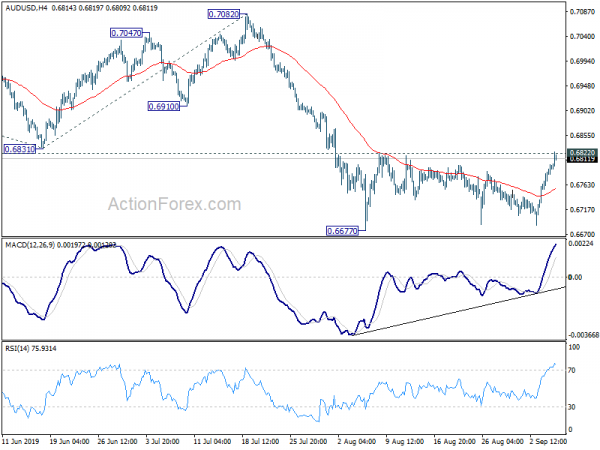 Asian markets are generally lifted by confirmation that US-China trade talk is going to resume next month. Commodity currencies gain most as led by Australian Dollar. Swiss Franc and Yen are pressured in risk seeking environment naturally. But Sterling also turns softer on overnight condition. It’s getting much more likely that no-deal Brexit could be averted on October 31. Yet, the UK parliament is still unclear on what it truly wants regarding Brexit. Dollar is mixed as focus will turn to services and job data.

Technically, USD/CAD and USD/CHF could have completed recent rebound at 1.3382 and 0.9929 respectively. More downside is now mildly in favor for both pairs. AUD/USD is pressing 0.6822 resistance and break will extend the rebound from 0.6677. But there is no confirmation of weakness in Dollar against Euro, Yen and even Sterling. Talking about Yen, despite today’s rebound, EUR/JPY is held below 117.91 resistance, GBP/JPY by 130.89 resistance, USD/JPY by 106.73 resistance. More is needed to confirm selling momentum in Yen.

US and China agreed to continue trade negotiations in October

Sentiments in Asia are apparently lifted after confirmation of US-China trade meeting in early October. The Chinese Ministry of Commerce said “both sides agreed that they should work together and take practical actions to create good conditions for consultations.” That came after a telephone call between Vice Premier Liu He and PBoC Governor Yi Gang, with US Trade Representative Robert Lighthizer and Treasury Secretary Steven Mnuchin. Conversations between two sides will continue this month, in preparation for high level negotiation in early October.

Separately, USTR spokesperson Jeff Emerson also confirmed in a statement that “They agreed to hold meetings at the ministerial level in Washington in the coming weeks. And, “In advance of these discussions, deputy-level meetings will take place in mid-September to lay the ground work for meaningful progress.”

Fed Beige Book: Effect of tariffs not to be felt for a few months

Fed’s Beige Book economic report noted that economy expanded at a “modest pace” through the end of August”. Concerns regarding tariffs and trade policy uncertainty continued. But businesses remained “optimistic” about the near-term outlook.

Overall, districts indicated that employment grew at a “modest pace”, “on par” with previous period. However, manufacturing was “flat to down” and “tightness” continued to “contrain growth” in overall business activity. Wage growth remained “modest to moderate”. There was “strong upward pressure” on pay for entry-level and low-skill workers, technology, construction, and some professional services positions.

Fed Williams is carefully monitoring a nuance picture, ready to act as appropriate

New York Fed President John Williams said in a speech that “the economy is in a good place, but not without risk and uncertainty”. “Persistently low inflation” is a key area of his attention. In particular, he noted the “broader context is important”, with “ongoing disinflationary pressures from abroad”.

Meanwhile, beyond the “good” headline GDP figure, there are “more mixed signals coming from different sectors”. “Robust consumer spending is balanced by signs of slowing business investment. We’ve also seen a decline in exports and weakening manufacturing data, reflecting slowing global growth and uncertainty related to trade and geopolitical risks.” Williams said he is carefully monitoring this “nuance picture” and “remain vigilant to act as appropriate”. And, Fed will maintain a “data-dependent approach that takes into account the risks and uncertainty that are weighing on the economy.”