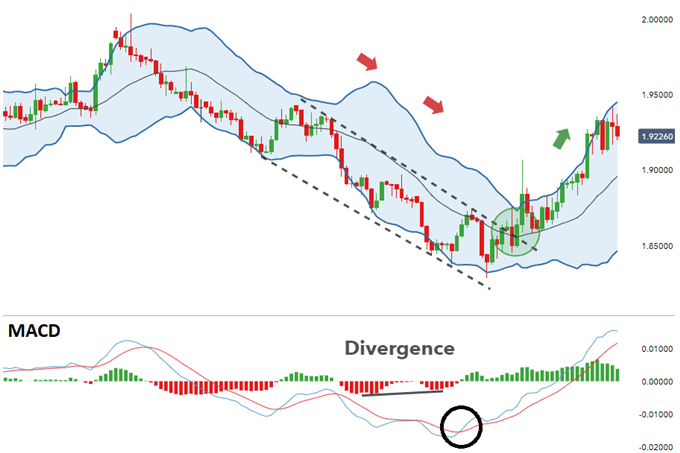 Bollinger Bands® can provide invaluable signals for technical traders, and when combined with the Moving Average Convergence Divergence (MACD) indicator, gives traders insight into both volatility and momentum in the forex market.

Before reading further, be sure to understand the basics of both the Bollinger Band® and the MACD indicator.

What is the Bollinger and MACD Combination?

As the title suggests, traders can make use of Bollinger Bands® in conjunction with MACD to support trade set ups. Bollinger Bands® allow traders to view the cyclical nature of volatility while the MACD is an effective trend-following, momentum indicator.

Using these two indicators together can assist traders when making higher probability trades as they can gauge the direction and strength of an existing trend, along with volatility. As a result, traders can use the MACD to assess if a trend is picking up in momentum or slowing down and setting up for a possible breakout; while the Bollinger Band® can be used as an entry trigger and subsequent confirmation of a trade.

How to Use Bollinger Bands® and MACD to Trade Forex

Traders can trade with Bollinger Bands® and MACD in a number of different ways but two of the most common ways to trade with these two indicators involve breakouts and trend trading.

In the GBP/NZD chart below, it is clear to see a strong downtrend where price starts to trade within a descending channel. Traders can trade the breakout by looking for slowing downward momentum (divergence in the MACD histograms).

A break of the 20 period Moving Average (centre line within the Bollinger Bands®), after witnessing bullish divergence, provides the signal to enter the long trade. The dotted line on the upper side of the channel represents trendline resistance and coincides with the 20 MA of the Bollinger band® when price breaks through it. A break of these two lines confirms that this is a significant level, further reinforcing the bullish bias.

The MACD indicator supports the bullish trade as the MACD line has crossed the signal line and continues to move above the signal line, showing strong upward momentum. The Bollinger Band® then confirms the move to the upside as price begins to “walk the band” on increased volatility (expansion of the band).

Stops can be placed below the lower Bollinger Band® or at the low of the descending channel. Targets can be placed at a previous high or significant level of resistance – while maintaining a positive risk to reward ratio. Since there is a possibility that the breakout trade turns into a trend reversal, traders should consider multiple target levels and manually move stops up or utilize a trailing stop.

The Bollinger Band®, MACD combination can also be used in trending markets via the following process:

The EUR/USD chart below depicts the Bollinger and MACD trend trading strategy. The MACD confirms the uptrend with MACD line above the signal line and both lines are above the zero mark. This sets the filter that traders should only be looking to enter long trades. 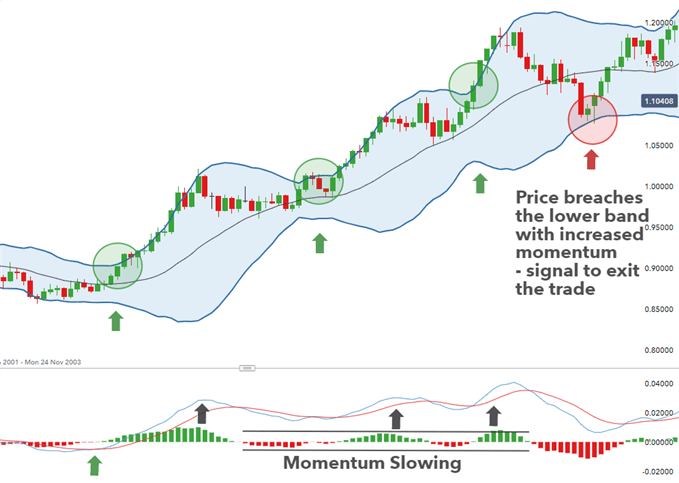 After the initial spike in momentum to the upside, momentum slows down and although the MACD line crosses below the signal line, these moves are on low volume and result in short term consolidation rather than a move against the current trend. The uptrend is further reinforced by the fact that price bounces off the 20 MA and continues making higher highs and higher lows.

Traders can look to enter long trades in accordance with the Bollinger Band® Squeeze (green arrows). Long traders can either choose to exit the trade as price drops to the 20 MA or can look for a breach of the lower Bollinger Band® as the exit signal.

Traders can make use of a trailing stop or stops can be manually moved along the lower Bollinger Band® as price rises. Targets can be set at significant levels of support and resistance while maintaining adequate risk management.

Advantages and Limitations of the Bollinger Bands® and MACD System