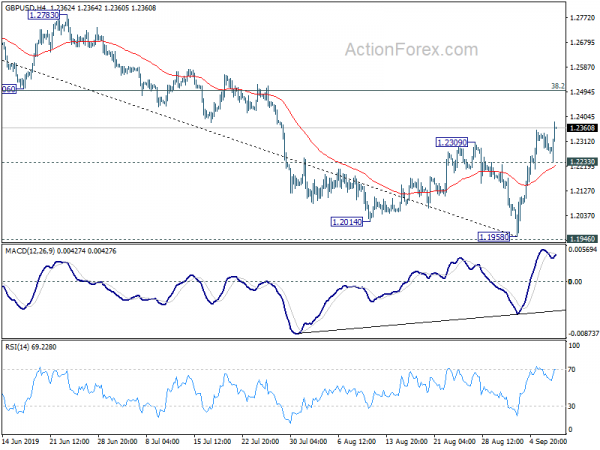 Sterling rises broadly today as recession risk recede after better than expected GDP data. While it’s unsure whether growth could sustain, the Pound cheers the improved outlook anyway. At this point, Australian Dollar is second strongest, followed by New Zealand Dollar. On the other hand, Swiss Franc is the weakest one, followed by Yen and then Dollar.

Technically, both GBP/USD and GBP/JPY extend last week’s rebound and further rise should be seen. Focus will be on whether 1.2502 and 135.07 would hold on next rises. More importantly, EUR/GBP will be facing 0.8891 cluster support. For, we’d still expect this support to hold to bring rebound. But decisive break will extend the fall from 0.9324 to 0.8797 fibonacci level and possibly below.

UK GDP grew 0.3% in July, but flat in the three months

Head of GDP Rob Kent-Smith said: “GDP growth was flat in the latest three months, with falls in construction and manufacturing. While the largest part of the economy, services sector, returned to growth in the month of July, the underlying picture shows services growth weakening through 2019. The trade deficit narrowed due to falling imports, particularly unspecified goods (including non-monetary gold), chemicals and road vehicles in the three months to July.”

NIESR expects UK economy to return to growth, but unsure for how long

The NIESR said in a report that UK economy is on course to grow 0.3% in Q3, rebounding from Q2’s -0.2% contraction. NIESR said it’s a “welcome resumption of economic growth”. However, it also warned that “it is not clear how long growth will continue.”.

NIESR added, “Only the services sector is expanding, primarily to meet higher demand from consumers driven by increased household incomes fuelled by rising real wages. But there is a limit to how much further real wages can grow without a pick-up in investment and productivity, and this seems unlikely in the near term.”

UK parliament to be suspended after today’s businesses

UK Prime Minister Boris Johnson’s call for general election today will very much likely fail. Labour already indicated in a statement that they “would not support Boris Johnson’s ploy to deny the people their decision by crashing us out of the EU with No Deal during a general election campaign”. Meanwhile, Johnson’s spokesperson James Slack has confirmed that Parliament will be suspended once today’s business has been completed.

Separately, Johnson said in Ireland, alongside Irish Prime Minister Leo Varadkar that he wants to “find a deal” and “get a deal” on Brexit. And, “for the sake of business, for farmers, and millions of ordinary people who are counting on us to use our imagination and creativity to get this done. I want you to know I would overwhelmingly prefer to find an agreement.”

Varadkar, on the other hand, said “in the absence of agreed alternative arrangements, no backstop is no deal for us… We are open to alternatives, but they must realistic ones, legally binding and workable and we haven’t received such proposals to date.”

Eurozone Sentix investor confidence improved to -11.1, but economy not far from recession

Eurozone Sentix Investor Confidence improved to -11.1 in September, up from -13.7 and beat expectation of -16.0. Expectations Index improved notably from -20.0 to -12.8. However, Current Situation Index declined for the fourth month in a row, from -7.3 to -9.5, hitting the lowest level since January 2015.

The Current Situation Index shows that “Eurozone is not far from a recession”, as noted by Sentix, as they expected a recession from -10 points. Sentix added: “It is also questionable whether a recession can be avoided. For even if the expected values have improved significantly to -12.8 points, they still bear a negative sign. A sustained turnaround would require positive expectations.”

Sentix also said, “Investors are focusing on two issues here: firstly, the trade dispute between the USA and China. After the bad experiences with US President Trump’s tweets, however, hardly anyone is prepared to make an advance payment here. What remains is the ECB, from which investors expect real wonders at the forthcoming meeting. The sentix barometer for central bank policy is +3