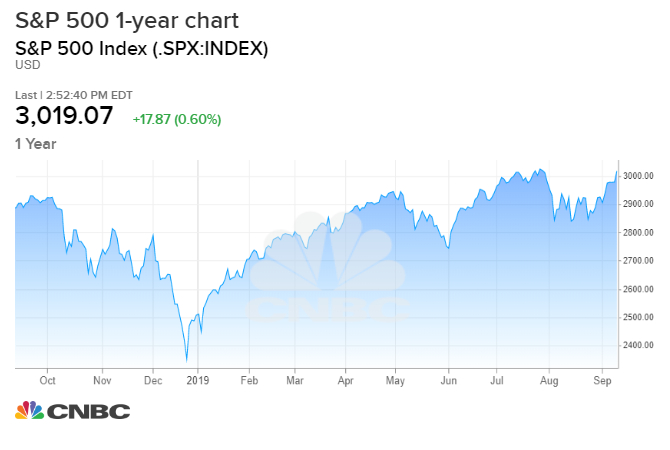 Strength in semiconductors and a whole host of other sleeper stocks is a telling sign that the market will not only make it to new highs but could remain in an uptrend, according to technical analysts.

For a couple years, investors could simply look to the performance of the favorite FANG names — Facebook, Amazon, Netflix and Alphabet — for clues to market performance, but now the fact that a broad range of stocks are being swept higher is a very positive sign.

“This is different than the past few moves back to highs. You have a bigger base. When you have one group that’s leading and everything else is left behind it’s easy to lose that one group, and you hit an air pocket,” said Scott Redler, technical analyst and partner with T3Live.com. “When you have a lot of groups and they’re taking turns, it’s harder to break the back of the bull.”

The S&P 500 is less than a percent away from its all-time high and was higher by a half percent Thursday. The Dow is also closing in on its high of 27,398. The S&P was just about 10 points below its all-time high of 3,027.98, and Redler said a positive would be if it can hold the psychological 3,000 level.

Stocks are powering higher amid positive developments in the trade wars, with U.S. officials preparing to meet Chinese counterparts next month. Analysts have said the market’s run higher could be disrupted if there is negative news on the trade front. For now, both the U.S. and China have held off on some new tariffs in a show of good faith.

Trading in recent sessions has been markedly different than in other phases of the bull market. Value stocks, or those less loved and with lower price-to-earnings ratios, have been gaining favor. At the same time, the momentum stock winners underperformed, though some are moving higher after falling at the beginning of the week.

“I think the general view out there is growth and value are mutually exclusive ideas. I disagree. I think they can work in tandem,” said Chris Verrone, Strategas Research head of technical strategy. “We call that a broader market.”

A number of those momentum names were higher Thursday, including Visa, up 2.3%, and Mastercard, up 2.6%, and the iShares Edge MSCI USA Momentum Factor ETF was up 1.4%. At the same time, the iShares S&P 500 Value ETF IVE had been moving opposite momentum, but it was slightly higher in afternoon trading.

Some strategists say the big rotation, which was not so obvious in Thursday’s trading, was kicked off by the belief that interest rates are rising after finding a bottom this summer. The 10-year yield Thursday was at 1.77%, just weeks after hitting a low of 1.42%. Yields move opposite price.

In the recent past, when the stock market returned to highs previously, it was led by FANG, Redler said. “This time tech and FANG are kind of in line and not a headwind,” he said, “but it’s the broad-based nature of the value names, small caps and banks that lifted the S&P to play catch up, and lifted it back to its highs.”

Frank Cappelleri, executive director at Instinet, said the best-case scenario for the market is for the momentum laggards from earlier in the week to join the value and other stocks that are moving higher. He said the software sector is a key group to regain ground. Microsoft was up 1.4% Thursday after getting knocked down earlier in the week.

“I think you always have to watch tech, how semiconductors are doing going forward. [The VanEck Semicondutor ETF] SMH has quietly gotten back to its highs of the summertime,” said Capelleri. “If you looked at what happened last year, they lagged since March of 2018.” 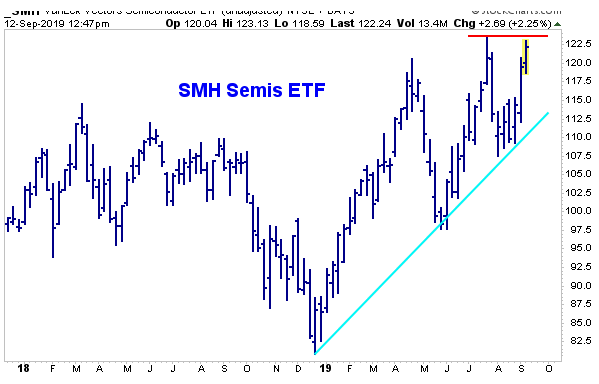 Cappelleri said in a week where momentum got hit so hard, the sector “was stubborn in terms of not losing its bid.” SMH was up 2.6% for the week and is now up 7.1% for September so far.

Verrone said the leaders in the group are acting well, as the sector reasserts its market leadership. “Texas Instrument and Taiwan Semiconductor are big global bellwethers that behaved resoundingly well, despite what many people believe is a tense trade and global growth environment,” he said. 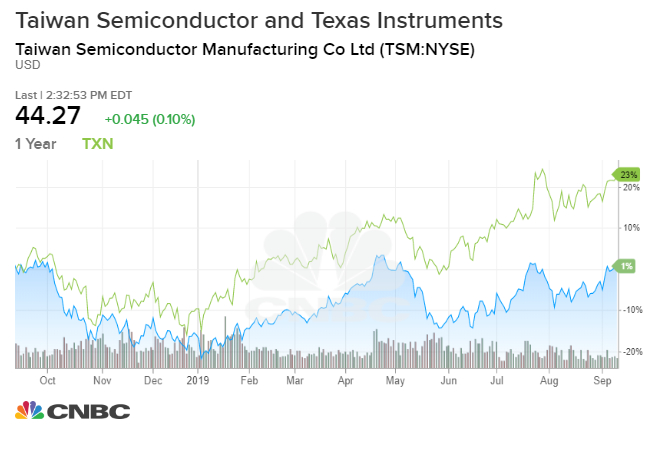 Verrone said the two chip names are part of a handful of stocks he is watching to gauge the market’s health. The others are Alibaba, J.P. Morgan and Apple.

“Two weeks ago, they had these bank stocks on the ropes. The referee was about to stop the fight. But the way they’ve come back from that is impressive. J.P. Morgan, in particular, is literally on the doorstep of a new all-time high,” he said. “They had every opportunity to just finish that one off a couple of weeks ago. They couldn’t keep it down.”

Alibaba, Chinese e-retailer, is at the center of the trade conflict. “It’s ground zero for the Chinese consumer stocks and growth,” he said.

Verrone said Wall Street’s current lack of love for the one-time darling is a positive for a further move higher.

“Apple has the fewest number of buy ratings from the sell side at any point in about a decade,” he said. “All during the summer you saw all the analysts capitulate,” he said.

Verrone said he expects the market to continue moving higher, and the S&P 500 to reach 3,150 by the end of the year.

Besides the strong behavior of those select stock names, Verrone said there are plenty of other positives.

“I just can’t remember a time when the divide between perception and reality has been so wide,” said Verrone. “People have been very uncomfortable all summer, but the stocks don’t act bad. That tells us the market is heading higher.”

Improvements in such indicators as the advancing shares over declining is also a good sign for further gains. Verrone said earlier this week the percent of stocks with an upward sloping 200-day moving average is the best of the year so far, and new highs are show up in transports, discretionary and banks. .

“A breadth surge over the last two weeks is as good as anything we’ve seen in the days and weeks coming off the December 2018 lows,” he said. “That’s true in Europe and domestically as well.”