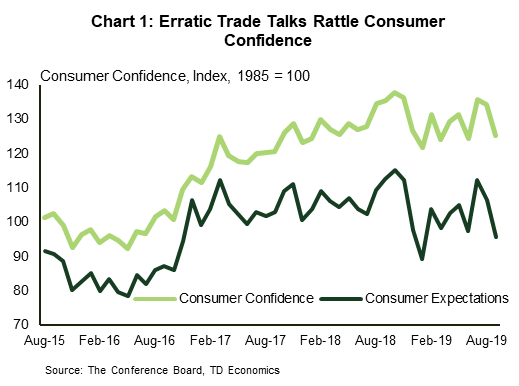 The financial news this week was highlighted by old-fashioned political words like “prorogation” and “impeachment.” In the U.K., the Supreme Court ruled that Prime Minister Johnson acted unlawfully when he prorogued Parliament earlier this month. The ruling is expected to intensify Brexit tensions in the weeks ahead.

In the U.S., House Speaker Nancy Pelosi announced an official impeachment inquiry into President Trump after a whistleblower report suggested that he withheld aid to Ukraine while pressing the country to investigate Democratic presidential candidate Joe Biden and his son. The threat of ousting the president from office contributed to market volatility, but with few believing it will hit the two-thirds of the Senate required for conviction, market reaction was relatively muted, with stock markets edging modestly lower and bond yields down a few basis points.

Meanwhile the U.S.-China trade dispute continues to simmer. Washington and Beijing, sent out mixed signals throughout the week. Mr. Trump noted that he wouldn’t accept a “bad” trade deal with China, but by Wednesday stated that a trade deal with China “could happen sooner than you think.” China, on the other hand, called trade talks “productive” and “constructive” and there are reports that Chinese companies are preparing to increase their purchases of U.S. pork and soybeans, notwithstanding the cancellation of scheduled U.S. farm visits by Chinese delegates.

The erratic nature of trade talks has undoubtedly contributed to a falloff in consumer confidence. The Conference Board’s index fell by the most in nine months in September to 125.1, from a downwardly revised 134.2 the month before (Chart 1). The reading was well below market expectations. The expectations index also declined to 95.8 from 106.4 previously. The downturn in expectations could see consumers hold back on spending. Indeed, consumer spending slowed more than expected in August, nudging up just 0.1% month-on-month. On the upside, incomes rose by a solid 0.4%. Price pressures were steady, with PCE inflation holding at 1.4% year-on-year, but the core measure ticked up to 1.8% (from 1.7%).

Activity in the housing market fared better. New home sales increased 7.1% in August and pending home sales rose a better-than-expected 1.6%. Residential investment is likely to add a small, but positive, amount to third quarter GDP – a welcome development after several quarters subtracting from growth. On the price side, the Case-Shiller index slowed in July to the slowest pace since September 2012 (Chart 2). The deceleration in price growth may not be such a bad thing, easing affordability pressures and helping to sustain the recent pickup in housing demand.

Canadian markets were generally soft this week, with the S&P/TSX composite index trending steadily lower, in near-lockstep with falling oil prices. Notably, the declines were widespread, with only the utilities and financials subcategories shaping up to end the week higher at the time of writing. South of the border, markets withstood some spicy political headlines and managed to turn out a mixed performance across the major indices.

Turning to the domestic dataflow, releases were mainly ‘second tier’; the type that typically don’t get as many headlines, but still contribute to the economic picture. In contrast to last week’s generally weak data releases (such a