US manufacturing survey shows worst reading in a decade 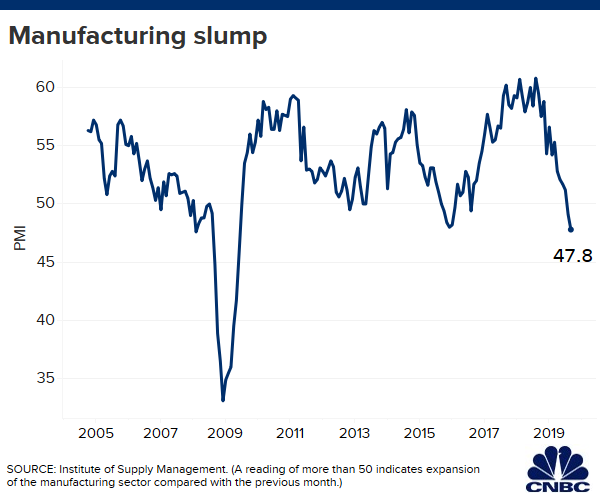 A gauge of U.S. manufacturing showed the lowest reading in more than 10 years in September as exports dived amid the escalated trade war.

The U.S. manufacturing Purchasing Managers’ Index from the Institute for Supply Management came in at 47.8% in September, the lowest since June 2009, marking the second consecutive month of contraction. Any figure below 50% signals a contraction.

The new export orders index was only 41%, the lowest level since March 2009, down from the August reading of 43.3%, ISM data showed.

“We have now tariffed our way into a manufacturing recession in the U.S. and globally,” said Peter Boockvar, chief investment officer at Bleakley Advisory Group.

The report fanned fears of a recession and hit the stock market. The Dow Jones Industrial Average lost more than 200 points, erasing earlier gains on Tuesday.

“Global trade remains the most significant issue, as demonstrated by the contraction in new export orders that began in July 2019. Overall, sentiment this month remains cautious regarding near-term growth,” Timothy Fiore, ISM chair, said in a statement.

The ISM employment gauge for the sector showed the lowest reading since January 2016, primarily driven by a lack of demand. New orders, backlog, raw materials inventories exports and imports also contracted across the board last month, ISM data showed.

“There is no end in sight to this slowdown, the recession risk is real,” Torsten Slok, chief economist at Deutsche Bank said in a note on Tuesday following the report.

The deeper contraction in the manufacturing sector is the latest sign that the escalated trade war between the U.S. and China is taking a big bite from the economy. Manufacturing was once considered a big winner under the Trump administration with improvement in employment and activity over the past few years.

President Donald Trump blamed high interest rates and a strong dollar for the weakness in manufacturing, saying in a tweet Tuesday the central bank “allowed the Dollar to get so strong … that our manufacturers are being negatively affected. Fed Rate too high.”

The sector contracted for the first time in more than three years in August, ending a 35-month expansion period where the PMI averaged 56.5%, according to ISM.

“Comments from the panel reflect a continuing decrease in business confidence,” Fiore said.