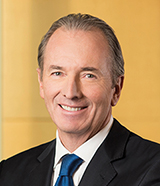 Morgan Stanley CEO James Gorman kicked off his third quarter earnings call on Thursday after hold music that had veered wildly from funk to orchestral, and he sounded upbeat after what he described as strong results.

The firm’s wealth management business was now powerful, with $2.6 trillion of assets and annualised revenues of about $17 billion. Margins there were at historic highs. But he still saw several avenues for growth, particularly in capturing some $4 trillion of assets “held away”, meaning those held at competitors by existing clients of Morgan Stanley.

He was particularly heartened by growth in Asia, and also noted that now that the business was stabilised within the firm, “every incremental dollar of revenue is at a higher margin than the existing business”.

The institutional securities group (ISG), Morgan Stanley’s investment banking and capital markets operation, had proved to have a resilient mix, he said, against what had been a difficult trading environment.

It has posted $5 billion of revenues for the fifth time in the last seven quarters. The strength of the firm’s client franchise was showing through in investment banking, FICC and equities, and the bank had been the beneficiary of continued client share consolidation.

All in all, there was tremendous upside, Gorman said.

There may well need to be in order to keep investors and analysts happy. Compared to the third quarter of 2018, revenues were up overall and in the institutional securities group, as well as in debt capital markets, advisory and FICC. But pre-tax profit fell at both group level and (sharply) in ISG, while revenues fell in equity capital markets and equities sales and trading.

On that pure year-on-year basis the firm was perhaps middle of the pack among the five big investment bank franchises reporting this week (see chart below). But the picture is worse on a year-on-year rolling 12-month basis, with the firm down in many categories, and frequently by more than peers.

That said, when it comes to CIB revenues and pre-tax profits, none of the big US firms is up on a rolling 12-month basis: Citi, the best performer, is merely flat.

Morgan Stanley was one firm where expenses were up, and Gorman rose to the bait in traditional form when asked by Mike Mayo at Wells Fargo how confident he was that he would be able to grow revenues faster than expenses.

“That’s what we are paid to do,” he said. “If we have a business where we are growing expenses faster than revenues long term then we are not going to have a very good business.”

But as far as Morgan Stanley was concerned, there were specific reasons for expense rises in the quarter. Litigation expense that dated back 10 years had been realised, there was continued tech spending and other elements like the integration of financial reporting and compliance software provider Solium, acquired earlier this year, into wealth management.

“But frankly I wasn’t concerned about that, and I am certainly not concerned for the next year,” he added.

At Morgan Stanley it has become a fixture of earnings calls that someone must poke Gorman with the stick of capital requirements, and this time around it fell to Gerard Cassidy of RBC to do so. He wanted to know when the firm expected its binding constraint to shift from the leverage ratio to CET1, a question of particular interest to Morgan Stanley given that its CET1 of more than 16% puts it about 250bp ahead of peers.

“You’re asking me to step into a lion pit here!” said Gorman. It’s a pit he knows well, but he was in generous mood. He thought the Fed had been very constructive in stepping back to take a look at the framework. And it had been critically important for banks to recapitalise and raise their liquidity, and he thought the results of peers this week had illustrated how the health of the US banking system was now reflecting that.

Gorman has argued for a long time that a simple leverage ratio is a questionable way to constrain banks since it fails to capture the intrinsic quality of a particular asset on the balance sheet, treating leverage applied to an illiquid asset the same as to a treasury security.

“It’s hard to see a scenario where capital stays flat or goes up, so therefore there’s only one alternative.”
-James Gorman

It meant that Morgan Stanley faced a persistent challenge in the amount of equity it needed to hold. But the gradual change to a CET1-based constraint that had been signalled by the Fed as a likely outcome of current regulatory transition was sensible and would give investors and ratings agencies a better sense of where risk really lay. And it would benefit the firm, he said.

He didn’t want a reversion to pre-crisis leverage levels of as much as 60 times, but ensuring that banks were not overcapitalised was also essential for the economy.

He couldn’t be sure on the timing of the change, but saw it as months rather than years. He could be sure, however, of the impact on Morgan Stanley. “It’s hard to see a scenario where capital stays flat or goes up, so therefore there’s only one alternative,” he added.

And given the changes that had already happened, he sounded confident that the Fed would be receptive to such concerns. After all, he noted, there had been progress, whether in changes to the rules around which banks were designated as systemically important, tweaks to the qualitative part of US bank stress tests and the openness of the Fed to rethink its approach to how to consider buybacks and dividends when looking at capital modelling in stressed scenarios.

CFO Jonathan Pruzan said that the firm was looking to grow share across its institutional securities group, and in particular saw opportunity to do that in Asia. He reckoned the firm had gained about three or four points of market share across the whole ISG franchise in the last few years.

The division had seen a strong September, Pruzan said, and the $5 billion revenues for the quarter were its highest third quarter for 10 years. Debt capital markets posted record revenues, spread across investment grade and high yield, as a good rate environment for issuers unlocked the summer backlog. It more than offset a weaker equity capital markets performance.

M&A completed volumes were up on a number of large strategic transactions, and pipelines remained healthy.

Gorman said that backlogs were good and advisory results were strong. A pushback of some equity capital markets volumes had been a slight dampener for Morgan Stanley, but the firm had made a major push in debt capital markets that was bearing fruit. Its share of about 14% for the quarter was the best for many years.

Morgan Stanley’s FICC business, which rose 21%, is nowadays sized for a quarterly run rate of $1 billion – and the $1.4 billion result this quarter means that the bank has already posted $4.2 billion in the first three quarters.

Pruzan said that credit and securitised products had been strong, with balance sheet velocity better than at the same time last year. Macro had been impacted by a challenging environment, particularly in the first half of the quarter, but structured and commodities were up.

Equities revenues dropped 1%, but Pruzan said that the combination of scale and technology was paying off, as well as the fact that some competitors were stepping away from the business. Also helping was the fact that prime services was the biggest part of its franchise, “the centre of the machine”.

Gorman stressed, however, that while the firm expected to retain its leadership position in equities, he did not look at business opportunities purely in terms of market share, but profit.

And he was bullish on the broader outlook. While CEOs were concerned about the direction of global trade talks, he noted that financing remained cheap, people were confident about the US economy in particular and that transactions were getting done.

“Despite all the naysaying the reality is that the US economy is in good shape and consumer balance sheets are in good shape,” he said. “People are still spending.”