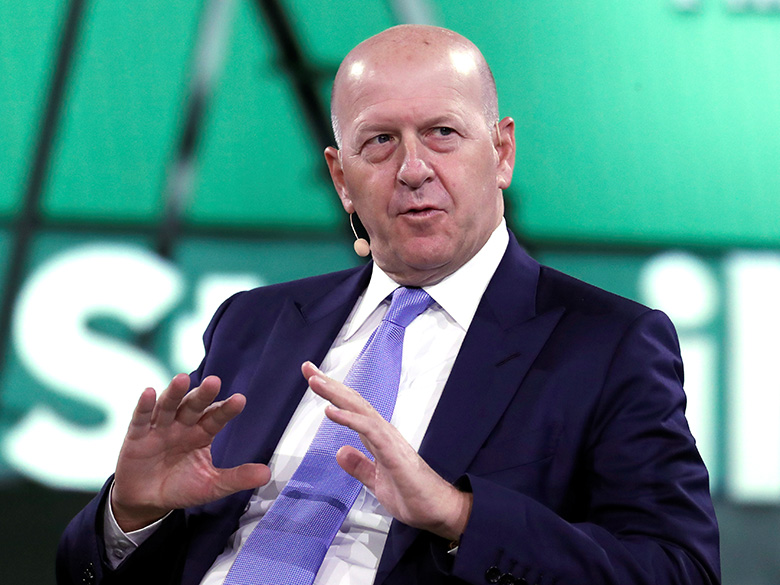 With a few earnings calls now under his belt, Goldman Sachs CEO David Solomon tends to rasp his way through them as if he’s George C Scott playing General Patton.

Reporting third-quarter earnings this week, he liked the fact that even though the firm’s investment banking revenues were down against a strong prior-year quarter, the bank was still number-one in equity underwriting and M&A.

Overall group revenues fell 6% year-on-year to $8.3 billion, but profits fell more sharply, by 22% to $2.4 billion as the bank’s spend on new areas dragged on returns.

At some point in January 2020, the bank will be laying out its strategy for the future in a full-blown investor day, a new experience for the firm.

However, in recent years Goldman has been busy trying to be a bit less like Goldman, building out its franchise into new consumer banking areas such as deposit accounts and now credit cards, as well as broadening its corporate appeal with a new transaction banking platform.

Solomon was pleased with the firm’s disciplined approach to building new scalable businesses, such as its Marcus deposit-taking platform and its Apple Card launch. Goldman had the advantage of no legacy infrastructure in these areas, he said, but a balance sheet and a well-recognised brand, useful for a firm wanting to be a disruptor.

We are less focused on competitor views on these issues

Goldman’s consumer banking efforts might be taking more of the attention right now, but the firm’s acquisition in the summer of investment adviser United Capital is an example of how it is looking to broaden its wealth management franchise more into the mass-affluent market.

Solomon said it would add a “unique and differentiated channel”, and while he noted that the bar for the firm to make inorganic moves of this sort was very high, wealth management was one area of focus.

At Goldman, the operating environment had been mixed and had slowed corporate activity, he said. Trade war concerns had contributed to a risk-off sentiment, but central bank responses had been accommodative.

Europe was decelerating, with trade and manufacturing weakness, notably in Germany. There were trade headwinds for China, but stimulus had supported growth estimates of 6% there. In the US, growth was continuing at about 2%. Solomon noted a resilience among consumers in the US.

CFO Stephen Scherr said that Goldman’s investment backlog had increased compared with the second quarter and he was optimistic that clients would remain active. Dialogues and financing markets remained healthy.

Mike Mayo at Wells Fargo seemed to rile Solomon with his assertion that rivals were not taking the firm’s universal banking ambitions seriously. Solomon pointed out that Goldman had built a digital consumer platform in three years, and had $55 billion of deposits and had made $5 billion of loans.

Apple Card had been “the most successful credit card launch ever”, he said. In doing so, it had spent a lot, but people would surely have thought it fine even to spend that to achieve the same result inorganically.

Yes, such projects drew on returns in the short term – the pre-tax $450 million impact so far this year was a drag of about 60 basis points on return on equity – but would be highly accretive in the longer term.

In any case, “we are very focused on proving what we do over time”, Solomon added. Asset management and the firm’s international business had previously been built over a long period, so it had already proved it could be done.

“We are less focused on competitor views on these issues,” he said.

Analysts also wanted to understand more about the bank’s $267 million net loss it saw in its $2.3 billion public equities portfolio that it holds in its investing and lending division. Stakes in Uber, Avantor and Tradeweb make up about 40% of that portfolio and accounted for most of the loss, said Scherr.

Goldman marks these positions to the observable market, less a liquidity discount where it is subject to a lock-up.

He added that the firm had also taken an $80 million mark against its position in WeWork, which it had tried to take public with JPMorgan in a deal that was ultimately rejected by investors.

However, he stressed that the remaining $70 million valuation of its holding was still greater than its embedded cost.

The WeWork stake is held in the bank’s $19.7 billion private securities portfolio, which it marks on an event-driven basis, such as another round of funding or a notable sale.

Advisory revenues fell sharply year-on-year at Goldman, with a drop of 22%, but this was off an extraordinary prior-year period when the firm clocked up nearly $1 billion in advisory alone.

And it is a measure of Goldman’s franchise that when its revenues drop it can still post a result that is 30% above its nearest rival Morgan Stanley.

In any case, the drop was in line with a 20% fall in the number of closed transactions above $500 million, a segment that Scherr said was the important driver of revenues. And Goldman had still advised on eight of the 10 biggest closed deals in the quarter. Year-to-date, it was on $1.1 trillion of announced deals and had closed about $1 trillion.

Goldman might be ranked top in equity underwriting, but its third quarter was not stellar on a year-on-year basis, with revenues down 11%, the worst move of the five big banks.

With masterful understatement, Scherr commented that the “recent market reception to certain companies has been less favourable”, but he nonetheless had confidence that the market would continue to invest in disruptive stories.

Goldman has been on both of the direct listings to have happened so far – for Spotify in 2018 and Slack in 2019 – but Solomon brushed off the suggestion that the technique might be a threat to banks who were active in traditional IPOs.

Goldman has focused on its DCM franchise in recent years, but it missed out on what had been a great quarter for competitors such as JPMorgan, Morgan Stanley and Bank of America, whose broader investment-grade businesses had enabled them to capitalize on a period that had featured several record weeks for US issuance.

Goldman’s DCM revenues declined 7% while they rose at its peers. In part the underperformance was down the fact that M&A-related financings had dropped off, as had leveraged finance.

FICC revenues were up 8% year-on-year. Scherr said that there had been higher client activity despite the mixed environment, with four out of five business lines showing high net revenues compared with the third quarter of 2018.

In rates, there were increased hedging flows amid a rally in government securities. Commodities was up as the firm garnered business through oil-price volatility in September. Mortgages and credit also rose.

Scherr said the firm was still expanding its automation and electronic capabilities, and had made considerable progress in credit as a result, executing a number of sizeable trades in investment grade.

It had also leveraged its Marquee electronic interaction platform to add greater capabilities to its commodities offering.