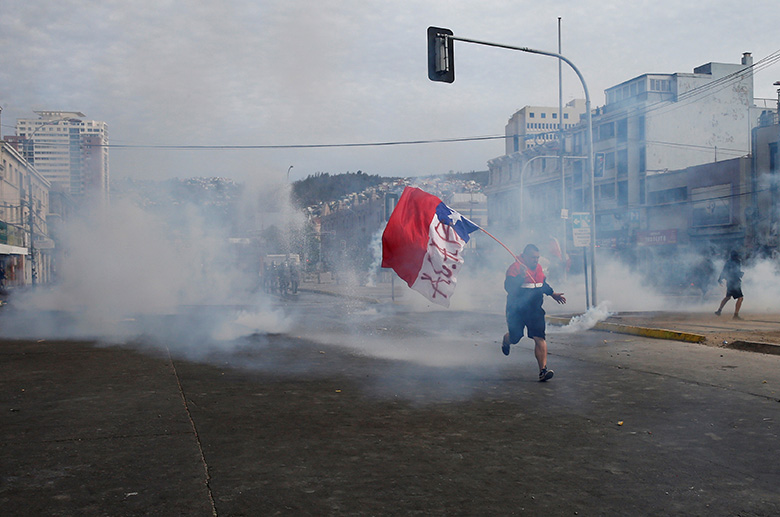 Sometimes one wonders if we really are living in a simulation – and then we see ironies so incredible: narratives surely too contrived to be served up by any conscious design.

Take Brazil’s pension reforms – the need for which has been talked about for more than a decade, and the specific reform has been years in the making.

Finally, on Tuesday, the Brazilian senate passed finance minister Paulo Guedes’ reform, which was inspired by the Chilean model.

The very same night, Chile – long the bastion of investment grade, economic rationalism and prosperity – was in flames: figuratively with huge protests and literally as buildings and underground trains were torched.

The Chilean government responded with a range of policies designed to placate the protestors – one of which was a 20% increase in the basic state pension.

The coincidence of both happening within the same 24 hours would be too heavy-handed for any writer.

Guedes has been vocal about his desire to copy the Chilean model implemented in the 1980s. Suddenly that seems a politically vulnerable claim.

However, it would be as wrong – as it is unlikely – for Guedes to change course; though he may want to stop referencing Chile as the model. The prescription for Brazil is broadly the correct one: including privatizations and a sharp reversal of recent fiscal expansion.

Guedes has also been clear about the need for simplification and deregulation – not least of the financial sector, which should be given a boost by creating an independent central bank in the next phase of reforms.

Banks on Faria Lima are in hiring mode: both the locals and the São Paulo offices of the international investment banks are in something of a fixed-income hiring frenzy. Record numbers and volumes of debt deals are expected to be printed in the local market in 2019 and next year is expected to be even better.

Meanwhile, the cause of Chile’s protests is different to the persistent weaknesses still very evident in Brazil. In Chile, there are many causes of the recent unrest, but the main one is the failure to share those gains that have been hard-won: the discipline that got Chile’s growth has become too constrictive.

Brazil won’t experience such growing pains for a decade – if it’s lucky.