Both Dollar and Canadian are under tremendous selling pressure after respective central bank announcements overnight. Fed chair Jerome Powell did signal a pause after yesterday’s rate cut. Yet, his message was too non-committal and let Dollar bulls dissatisfied. On the other hand, BoC was clearly more dovish than expected and raised the possibility of an “insurance’ rate cut. New Zealand and Australian Dollars are the strongest for today, as both are lifted by notable improvements in some economic data. Also, US and China are still on track to complete phase one trade deal despite cancellation of APEC summit in Chile. Yen stays mixed after BoJ stands pat and changed the forward guidance to indicate clear easing bias.

After some post FOMC volatility, Dollar bears took over the markets overwhelmingly and sent the greenback sharply lower. The key takeaway was that while Fed Chair Jerome Powell indicated a pause after overnight’s rate cut to 1.50-1.75%, he was non-committal. There was a brief lift to Dollar as he said “monetary policy is in a good place”, and it would take a “material reassessment” of the outlook for considering another rate cut again.

However, Powell did stick to script that current stance of monetary policy is likely to “remain appropriate as long as incoming information about the economy remains broadly consistent with our outlook.” It’s also mentioned in the statement the timing of future adjustments will be based on “realized and expected economic condition”, taking in to account “a wide range of information” including domestic job and inflation data, as well ass international developments. That is, Fed is maintaining a highly data-dependent approach, without closing the door for further cuts.

Trade development is something that Fed will closely monitor. Powell said “We have that Phase One potential agreement with China which, if signed and put into effect, could have the effect of reducing trade tensions and reducing uncertainty. That would bode well for business confidence and perhaps activity over time.” If the economy was to experience “a sustained reduction in trade tensions, a broad reduction in trade tensions, and a resolution of these uncertainties, that would bode well for business sentiment.

BOC turned dovish in the October meeting, while maintaining the policy rate unchanged at 1.75%. For the first time, the central bank discussed about “insurance” rate cut, citing trade war’s damage to business investment and exports. The announcement sent the loonie lower, giving half of the gains made earlier this month.

Australian Dollar surges broadly today firstly with the help from post FOMC selloff in Dollar. In the background, Aussie has been riding on optimism towards US-China trade negotiations recently. The strong housing data today also eased concerns of a renewed downturn in the housing markets. Building permits rose 7.6% mom in September, way above expectations of 0.1% mom. Other data, while missed, were not disastrous. Private sector credit rose 0.2% mom in September versus expectation of 0.3% mom. Import price index rose 0.4% qoq in Q3 versus expectation of 0.5% qoq.

BoJ left monetary policy unchanged today as widely expected, but stepped up its signal for more easing ahead. Under the yield curve control framework, short term policy interest rate was held at -0.1%. Also, the central back will continue to increase monetary base at JPY 80T a year, with purchases of JGB to keep 10-year yield at around 0%. The decision was made by 7-2 vote, with Y. Harada and G. Kataoka dissenting as usual.

The forward guidance was changed to: “As for the policy rates, the Bank expects short- and long-term interest rates to remain at their present or lower levels as long as it is necessary to pay close attention to the possibility that the momentum toward achieving the price stability target will be lost.” Previously, BoJ said its  committed to keep “current ultra-low rates for an extended period of time, at least until the spring of 2020.” It’s a clear message that BoJ is ready to cut interest rates again any time if outlook deteriorates further.

At the post meeting press conference, Governor Haruhiko Kuroda confirmed that the new forward guidance aimed at clarifying the stance that “policy bias is leaning towards additional monetary easing.” Regarding the tools, BoJ could “cut interest rates, increase asset buying or accelerate the pace of increase in base money”.

China NBS PMI Manufacturing dropped to 49.3 in October, down from 49.8 and missed expectation of 49.8. It’s the sixth straight month of contraction reading. Looking at some details, new export orders dropped for the 17th month to 47.0, down from 48.2. Employment improved slightly but remain deep in contraction at 47.3, up fro 47.0. NBS PMI Non-Manufacturing dropped to 52.8, down from 53.7 and missed expectation of 53.7. It’s also the lowest reading since February 2016.

The overall set of data suggests that while China’s growth is already at lowest pace in 30 years, there is not sign of a turn around yet. The improvements seen back in the end of Q3 were just ripples in a down trend, rather than the start of sustained recovery. The official PMIs will likely remain sluggish in the coming months while a Phase 1 US-China trade deal is unlikely to provide any immediate lift.

Germany retail sales rose 0.1% mom in September, below expectation of 0.3% mom. Eurozone will release GDP, unemployment rate and CPI flash in European session. Later in the day, Canada will release GDP, IPPI and RMPI. US will release personal income and spending, jobless claims and Chicago PMI.

AUD/USD rises to sa high as 0.6929 so far as rebound from 0.6670 extends. The break of 0.6894 resistance complete a double bottom pattern (0.6677, 0.6670), which is also an early sign of medium term bullish reversal. Intraday bias is now on the upside for retesting 0.7082 key resistance next. On the downside, break of 0.6809 support is needed to signal completion of the rise. Otherwise, outlook will stay cautiously bearish in case of retreat. 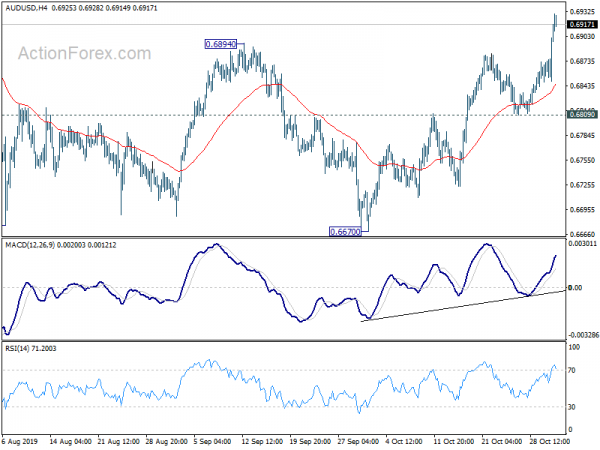 In the bigger picture, the case of medium term bullish reversal is building up with bullish convergence condition in weekly MACD. But there is no clear confirmation yet. As long as 0.7082 resistance holds, larger down trend from 0.8135 (2018 high) is still expect to continue to 0.6008 (2008 low). However, decisive break of 0.7082 will confirm medium term bottoming and bring stronger rally. 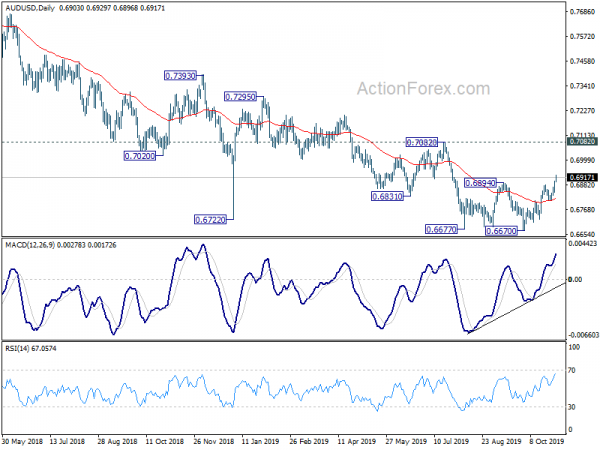