SNB left the policy rate unchanged at -0.75% in December. Again, the members reiterated the commitments to intervene in the currency in order to curb the appreciation of Swiss franc, which is described as “highly-valued”. They also affirmed to maintain the expansionary monetary policy so as to lift inflation to target level.

The central bank has been leaving its policy rate in negative territory for 5 years. At -0.75%, Switzerland, along with Denmark, has the lowest policy rate in the world. The measure is intended to encourage banks to lend money out, rather than depositing with the central bank. However, the profitability of the banking system is hurt in light of the charge on deposits.

Despite the pledge to intervene the currency market, Swiss franc has gained +0.44% against the euro since the September meeting. Indeed, it is difficult for SNB to weaken the franc given ECB’s resumption of monetary easing and QE. ECB lowered the marginal deposit rate to -0.5% in September and began buying bonds in the market again in November. While the current pace of asset purchase is 20B euro a month, the pace is expected to increase in 1H20. 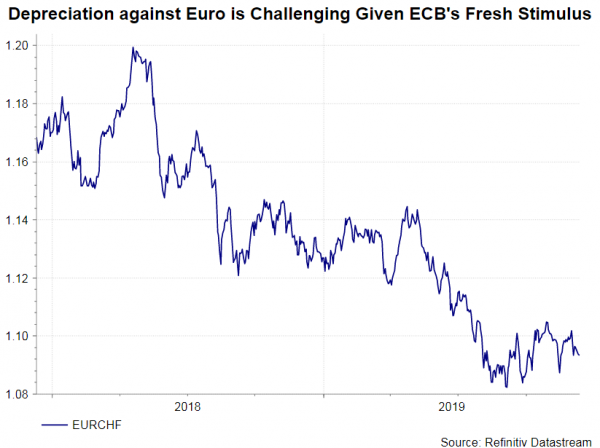 Previous: Dollar Dives as Fed Might Not Hike Until after 2022, ECB and SNB Next
Next: Country risk: Indonesia’s in-built resilience makes it one to watch in 2020