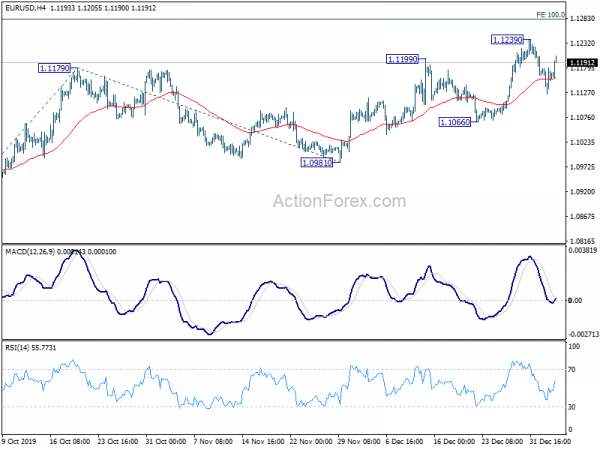 European majors stage a strong come back today as supported by positive data. Germany investor confidence recorded a strong rebound while UK PMI services was revised up. On the other hand, despite continuous risk aversion on Middle East tensions, Yen is pairing some of last week’s gains. Dollar follows and turn soft too. Gold and oil prices are off day high but remain firm.

Technically, EUR/USD is staying in consolidation from 1.1239 temporary top. Further rise is expected through this resistance. But we’d likely see some more consolidations first. EUR/JPY recovered strongly ahead of 119.99 support, maintaining near term bullishness. Further rise remains in favor through 122.65 resistance at a later stage. USD/CHF’s recovery is held well below 0.9977 resistance and near term outlook stays bearish.

German appears to be still trying to save the JCPoA (Joint Comprehensive Plan of Action, or the Iran nuclear deal. Foreign Ministry spokesman said “our goal remains to save the agreement. We are in talks on that.” EU foreign affairs chief Josep Borrell also said he regretted Iran’s move and emphasized, “full implementation of Nuclear Deal by all is now more important than ever, for regional stability & global security.”

On Sunday, Iran’s state television announced to step further away from the 2015 nuclear deal. The limits set down regarding the country’s nuclear work will no longer be respected., from uranium enrichment centrifuges to its enrichment capacity, the level to which uranium could be enriched, the amount of stockpiled enriched uranium or Iran’s nuclear Research and Development activities.

Sentix said: “This development is remarkable in two respects. For one thing, investors are once again making advance concessions to the ‘hard’ data. The manufacturing sector in particular is not yet showing any convincing signs of an upswing, at best signs of stabilization.”

Chris Williamson, Chief Business Economist at IHS Markit said: “Another month of subdued business activity in December rounded off the eurozone’s worst quarter since 2013. The PMI data suggest the euro area will struggle to have grown by more than 0.1% in the closing three months of 2019.” He added, “while the tide may be turning, downside risks to growth in the year ahead nevertheless remain notable. While US-China trade wars have eased, any escalation of trade tensions between the US and Europe will likely hit exports further. Brexit also remains a major uncertainty and is likely to continue to dampen growth in Europe. Nonetheless, in the absence of any major adverse developments we expect to see growth starting to improve as 2020 proceeds, with low inflation and easing financial conditions supporting consumer spending in particular.”

UK PMI services finalized at 50.0, overall stagnation of UK economy at the end of 2019

UK PMI Services was finalized at 50.0 in December, up from November’s 49.3. PMI Composite was unchanged at 49.3. Stabilization of the service sector was offset by a sharp and accelerated decline in manufacturing output (index at 45.6).

Tim Moore, Economics Associate Director at IHS Markit, said: “The latest PMI surveys collectively signal an overall stagnation of the UK economy at the end of 2019”. But “it is notable that the forward-looking business expectations index is now the highest since September 2018 and comfortably above its ‘flash’ reading for December. The modest rebound in new work provides another signal that business conditions should begin to improve in the coming months, helped by a boost to business sentiment from greater Brexit clarity and a more predictable political landscape.”

Japan PMI Manufacturing was finalized at 48.4 in December, down from November’s reading of 48.9. Key findings includ