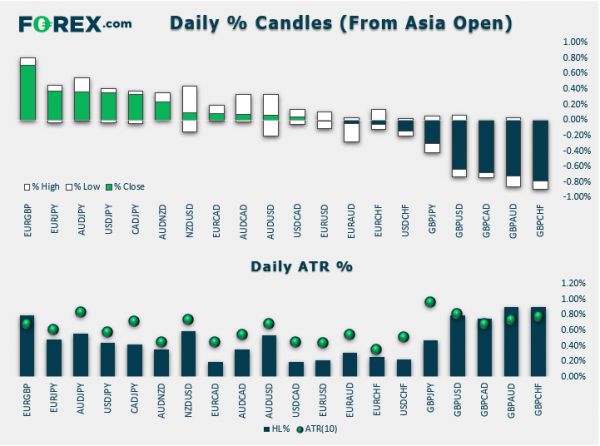 Market update at 12:20 GMT: In FX GBP was by far the weakest, with EUR and USD the strongest among the majors; stocks were off their best levels, and key commodities were lower.

GBP, already downbeat by news BoE’s Vlieghe will consider voting for a rate cut, was hit further when UK GDP came in below expectations earlier with a print of -0.3% m/m vs 0.0% expected. Manufacturing production (-1.7%) also disappointed but construction output (+1.9%) beat.

Stocks: Risk sentiment was given a gentle boost first thing, with traders anticipating that US and China will sign the much-touted phase one trade deal on Wednesday. However, European indices turned lower by mid-morning, awaiting direction from wall Street. That said, the FTSE remained in the black thanks to those disappointing UK macro numbers weighing on the pound.

Earnings kick off: The other significant focus will be the start of U.S. Q4 2019 earnings session. Major banks will kickstart the reporting session with Wells Fargo, Citigroup and JP Morgan all scheduled to report their results on Tuesday. No major data scheduled from North America, except the BOC Business Outlook Survey at 15:30 GMT.