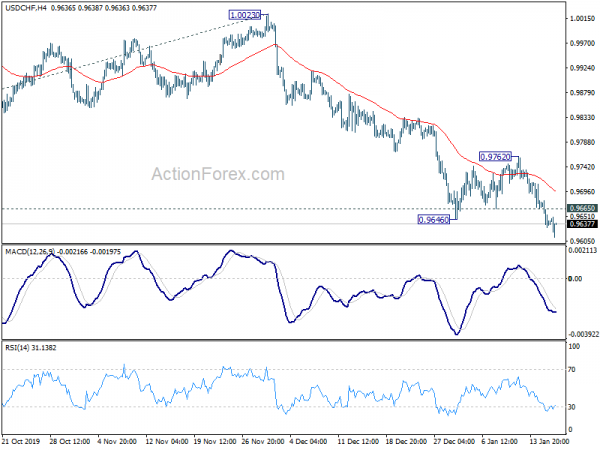 Yen and Dollar trade broadly lower today while markets are having different reactions to US-China trade deal phase one, which was signed finally yesterday. Asian stocks were mixed while European stocks are soft. But US futures point to higher open, probably extending recent record runs, while 10-year yield is back above 1.8 handle. Australian and New Zealand Dollar are the strongest today. Swiss Franc is also firm as safe haven flows on Russia uncertainty continue.

Technically, AUD/USD breaches 0.6930 but cannot sustain above this minor resistance yet. As long as 0.6930 holds, we’d still expect another decline through 0.6849 to extend the fall from 0.7031. However, firm break of 0.6930 will revive near term bullishness for 0.7031 and above. This will be a focus in European session. EUR/JPY breaches 122.76 temporary top and should be trying to extend recent rise form 115.86. Yet, upside momentum is not too convincing for now.

Philadelphia Fed Manufacturing Business Outlook jumped to 17.0 in January, up from revised 2.4 in December, beat expectation of 3.7. The percentage of the firms reporting increases (39 percent) was greater than the percentage reporting decreases (22 percent).

EU Trade Commissioner Phil Hogan sounded skeptical regarding US-China trade deal as he spoke in a press conference. he noted that “the devil is in the detail”, and “we will have to assess whether it is WTO compliant”.

Meanwhile, Hogan also sounded harsh against China as he complained that the EU is “very open” while China is not opening as promised. He added that China is looking for dominance, influence geopolitically through trade and investment. Also, EU cannot let Chinese dominance put EU companies out of business based on unfair subsidies.

In the December 11-12 monetary policy accounts, ECB said incoming data since October pointed to “continued weakness” in Eurozone growth dynamics, but there were “some initial signs of stabilisation”. Inflation development remained “subdued overall” while there were “some indications of a slight increase in measures of underlying inflation in line with previous expectations.”

There was “broad agreement” on the need to carefully monitor incoming data and evolution of risks. Some members highlighted the need to be “attentive to the possible side effects” of current policy measures. But “confidence was expressed that policy rates had not yet reached the so-called reversal rate”.

Germany’s BDI association expected growth to slow further in 2020 to 0.5%. After calendar adjustment, growth could be as low as 0.1%. President Dieter Kempf  said “industry remains stuck in recessi