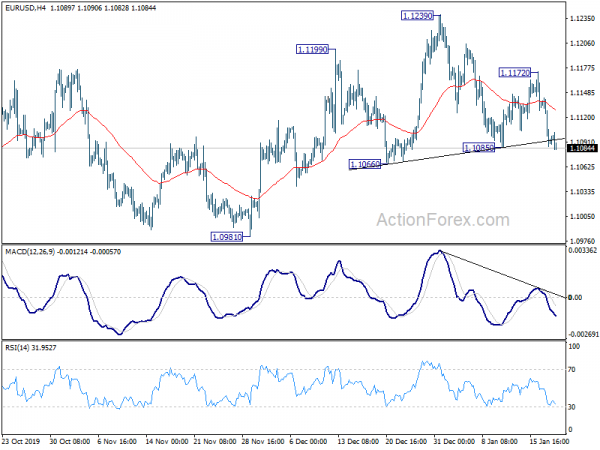 Dollar, Canadian and Yen are so far the strongest ones in a relatively quiet day. The greenback is supported by recent data as well as easing trade tension. But as the US economic calendar is ultra light this week, Dollar’s fate is likely on others’ hands. Canadian Dollar is supported by oil prices, which surged on double-whammy production disruption in Libya and Iraq. On the other hand, Sterling is extending recent broad based weakness on BoE rate cut speculations.

Technically, focus stays on 1.1085 support in EUR/USD, which is breached already. Sustained break will complete a head and shoulder top pattern, which should at least turn outlook bearish for 1.0981 support. However, USD/JPY is clearly losing upside momentum, following other Yen crosses like EUR/JPY and GBP/JPY. Break of 109.79 support in USD/JPY will indicate short term topping and bring deeper pull back. That could limit downside of EUR/USD.

In the monthly report, Bundesbank said domestic economy was strong even though the overall economy probably stagnated in Q4. There is still no sign of an end to the boom in construction, which benefited from positive income prospects and favorable financing conditions.

Downward movement in the export-oriented industry continued. But there was increasing evidence of stabilization in the manufacturing sector. Industrial orders have not deteriorated further in the past few months. Goods export also increased significantly. Short-term export expectations recovered and returned to positive territory for the first time in six months.

France Economy Minister Bruno Le Maire said the economic impact of strike, which is in its 46th day, will be limited. But still, it could cut Q3 GDP growth by -0.1%. He told LCI television: “There will be an impact but it will be, I think, limited. Today estimates available show that the impact would be of a 0.1 points on growth on a quarter. On the whole year, it is a very limited impact.”

China’s Minister of Industry and Information Technology spokesperson Miao Wei said the government will continue with tax and fee reductions in 2020 to support growth. Focus will be on manufacturing sector, with increase in research and development investments.

Miao said “looking forward to 2020, industrial development faces many difficulties and risks,” and “pressure on stabilizing industrial growth is still big.” But the government will be able to “ensure the smooth operation of the industrial economy” with the above efforts.

On 5G technology, Miao said more than 130,000 base stations were built by the end of last year. 35 mobile phone terminals received network access licenses. More than 13.77m 5G phones were made. These phones are expected to cost less than CNY 1500 in Q4.

Abe told the parliament that “under an increasingly severe security environment in Northeast Asia, diplomacy with neighboring countries is extremely important”. And, “essentially, South Korea is the most important neighbor with which Japan shares basic values and strategic interests.”

Abe also urged to leave the issues of wartime labor behind. And, “I sincerely hope South Korea honors the commitments between the two counties and works toward building future-oriented relations.”