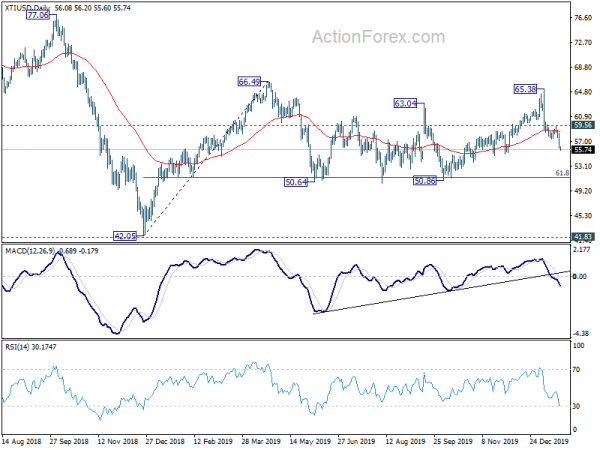 Australian Dollar rises broadly today as markets pare back bet on RBA rate cut in February, following better than expected job data. Though, upside is limited by risk aversion while Aussie is just following Yen as the second strongest. Asian stocks trade generally, deeply lower, after China halted travel from Wuhan city, the center of outbreak of the new coronavirus. Canadian Dollar is currently the weakest one. Selloff in the Loonie started overnight after dovish BoC, and extends on free fall in oil prices.

ABS Chief Economist Bruce Hockman said: “Trend unemployment rate decreased slightly to 5.1 per cent, its lowest level since April 2019. While there has been stronger growth in part-time employment over the past year, the underemployment rate is still where it was last December, at 8.3 per cent.”

Australian Dollar recovers as markets push back expectation of February RBA rate cut, due to the upside surprises in job data. ANZ said the data reinforce RBA’s view that the economy appears to have reached a “gentle turning point”. it will be difficult to see RBA easing in February even though rate cuts are more likely than not over the course of 2020. CBA said RBA would now likely cut by 25bps to 0.50% in April, instead of February.

Oil price dropped sharply overnight after International Energy Agency (IEA) Executive Director Fatih Birol said there would be a surplus of as mush as 1m bpd of oil in the first half of the year. He said, there is an “abundance of energy supply” in oil and gas. And it’s the “reason that recent incidents we have seen – with the Iranian general killed, Libya unrest – didn’t boost international oil prices.”

WTI’s fall from 65.38 resumed by taking out 57.35 support and hits as low as 55.60 so far. Such decline is seen as a leg inside the sideway pattern from 66.49. With 55 day EMA firmly taken out not, further fall should be seen to retest 50.84 key support level. Strong support should be seen from there to bring rebound. For now, break of 59.56 resistance is needed to indicate completion of the decline. Otherwise, near term outlook stays bearish in case of recovery.