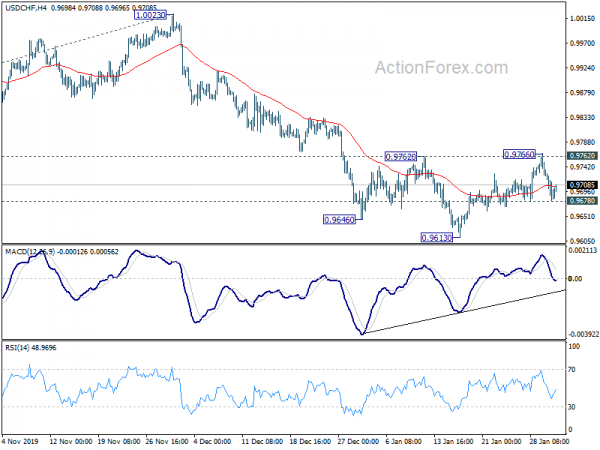 Sterling remains firm today and continues to trade as one of the strongest after yesterday’s BoE hold. Yen and Swiss Franc turn mildly softer but stay as two of the strongest too, on risk aversion. Commodity currencies turned mix, digesting this week’s sharp looses. New Zealand Dollar is the weakest for the week, followed by Australian and then Canadian. But there isn’t much difference between them. There is no sign of containment of China’s coronavirus outbreak yet and risk aversion will stay.

Technically, the forex markets are in consolidative mode today. USD/CHF’s prior rejection by 0.9762 resistance retains near term bearishness. But it’s held above 0.9678 minor support so far. EUR/CHF is also staying in consolidation from 1.0665. GBP/CHF, despite yesterday’s recovery, is stay above 1.2528, below 1.2854 resistance. Traders are holding their bet to wait-and-see the development over the coming weekend.

WHO has finally declared the coronavirus outbreak a global health emergence. Director-General Tedros Adhanom Ghebreyesus said “the main reason for this declaration is not what is happening in China but what is happening in other countries.” But he added that the organization “doesn’t recommend – and actually opposes” restrictions on travel or trade with China.

Meanwhile, Italian Prime Minister Giuseppe Conte halted all air traffic between Italy and China, after having two confirmed cases in two Chinese tourists. Japan raised travel warning to China to Level 2 and urge its people to avoid unnecessary travel to the country.

Japan industrial production contracted most since 2013 in Q4, despite Dec rebound

Japan industrial production grew 1.3% mom in December, beat expectation of 0.7% mom. However, in the three months of October-December, factory output has indeed contracted -4.0%. That was the worst decline since data began in 2013. The Trade Ministry also said “the pace of rebound (in Dec) was not big… we will closely monitor whether factory output will recover in coming months.” It also kept the assessment of production as weakening.