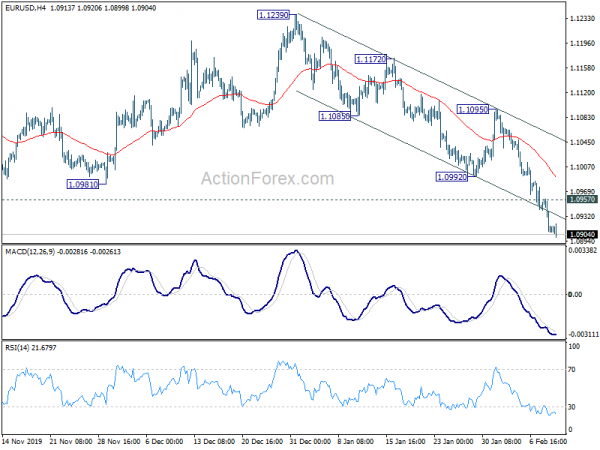 Yen and Swiss are trading generally softer today as risk markets pick up some momentum again. On the other hand, Australian Dollar is leading other commodity currencies higher. Dollar is mixed for the moment, awaiting Fed Chair Jerome Powell’s testimony. Rally in stock markets could extend if Powell affirms that interest rate will stay low for low. Also, it should be noted that strength in corrective recovery in commodity currencies is so far weak, in particular against the greenback. We might see Dollar extends recent rally should Powell sounds upbeat on the economy

Technically, intraday bias in EUR/USD remains on the downside for 1.0879 low. Decisive break there will bring medium term down trend resumption. Further decline is also expected in AUD/USD as long as 0.6774 resistance holds. Sustained trading below 0.6670 low will confirm medium term down trend resumption too. Meanwhile, further rise is expected in USD/CAD as long as 1.3262 minor support holds. Sustained break of 1.3327 resistance will pave the way to 1.3664 high.

WHO: China’s coronavirus a very grave threat for the world

World Health Organization director-general Tedros Adhanom Ghebreyesus warned that China’s coronavirus could pose a “very grave threat for the rest of the world”. He told more than researchers and national authorities at the start of a two-day meeting, “what matters most is stopping the outbreak and saving lives.”

Tedros also urged countries to share their data and emphasized “to defeat this outbreak, we need open and equitable sharing, according to the principles of fairness and equity.” However, at the same time, Taiwan, which has 18 confirmed cases, is also allowed to take part in as an observer.

EU to trigger an upward dynamic competition with UK

“This is what we also want. Let us formally agree on these objectives. We can formally trigger an upward dynamic competition that would benefit both the United Kingdom and the European Union,” she added.

UK GDP grew 0.3% mom in December, above expectation of 0.2% mom. For Q4, GDP growth was flat at 0.0% qoq, matched expectations. Services rose 0.1% in the quarter while construction grew 0.5%. But production contracted -0.8%, offsetting the contributions of the other two sectors.

Head of GDP Rob Kent-Smith: “There was no growth in the last quarter of 2019 as increases in the services and construction sectors were offset by another poor showing from manufacturing, particularly the motor industry. The underlying trade deficit widened, as exports of services fell, partially offset by a fall in goods imports.”

Australia NAB business confidence rose to -1, but decline in employment a concern

Alan Oster, NAB Group Chief Economist warned: “The concern this month is the decline in employment. It is now below average and a worry given the labour market has been a bright spot in the economic data. That said, there is a risk that ongoing weakness in business activity sees a pull-back in hiring intentions”.