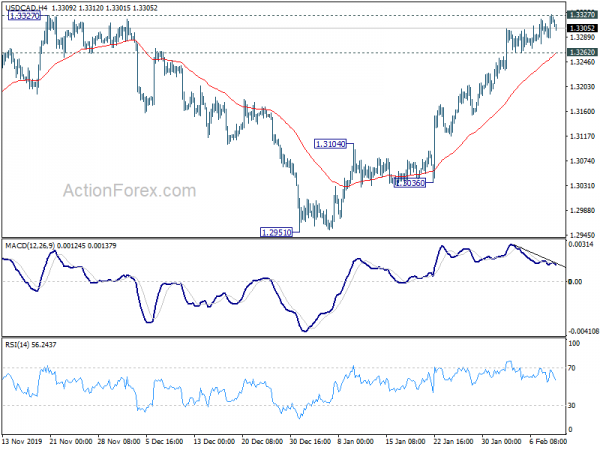 Market sentiments are generally calm in Asia, which follow US equities higher. Investors were assured by Fed officials that interest rate is going to stay low at current level for a while. Commodity currencies are recovering today, with Aussie leading the way, even though upside remains rather limited. Yen and Swiss Franc are trading softer, followed by the greenback. Sterling is mixed, awaiting some important economic data today.

Technically, EUR/USD’s decline is in acceleration, on track to retest 1.0879 low. EUR/CHF breached 1.0665 low but is repelled by 1.0629 key support again. USD/CHF is losing some intraday upside momentum, but there is no sign of topping. The interplay between these three pairs is something to watch today. AUD/USD and USD/CAD are worth a note too. AUD/USD is trying to draw support from 0.6670 low after breaching it. USD/CAD also struggle to sustain above 1.3327 resistance. Dollar could retreat against these two currencies.

San Francisco Fed President Mary Daly said “policy is in a good place. The economy is in a good place. And barring a material change in the outlook, then I’m comfortable with policy where it’s at, for the foreseeable future.” Her own forecast for inflation is that “it is gradually moving up to target, but my expectation is it wouldn’t achieve something like 2% until somewhere in 2021 as opposed to 2020.”

She added that “we haven’t seen much yet” regarding the impact of China’s coronavirus outbreak. And, “the most important impact would be through confidence, and we haven’t seen that yet either.”

Harker: Fed is on track to meet 2% inflation target

Philadelphia Fed President Patrick Harker said “my own view right now is that we should hold steady for a while and watch how developments and the data unfold before taking any more action.” He added, “we haven’t quite met our 2% inflation target, but we’re on track to get there.”

Harker also said it’s “too early to say what impact the spread of the coronavirus will have on the global economy, but the negative effects on the Chinese economy and international travel are something to watch”. He added, “If the situation gets significantly worse and we start to see significant impact on the U.S. economy, then we have to think about accommodating. But I don’t think we’re at that point right now.”

Australia NAB business confidence rose to -1, but decline in employment a concern

Alan Oster, NAB Group Chief Economist warned: “The concern this month is the decline in employment. It is now below average and a worry given the labour market has been a bright spot in the economic data. That said, there is a risk that ongoing weakness in business activity sees a pull-back in hiring intentions”.

China’s coronavirus death toll hits 1016, could lose up to 1% GDP

Zeng Gang, vice chair of the National Institute for Finance and Development, said in “according to different scenario assumptions, researchers expect the negative impact of the epidemic on full-year GDP growth