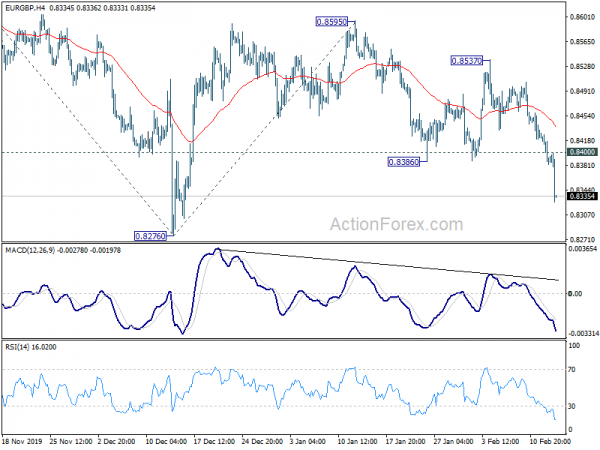 Global stock markets tumble today after China reported a strong daily increase of 15152 Wuhan coronavirus cases on February 12. That was a huge difference from 2015 new cases reported for a day ago. However, the mass difference was due to change in counting method in Hubei province, which is epicenter of the outbreak. It appears that other provinces are not up to speed with the counting method change yet. The overall announcements show deep disorganization in the Chinese government in fighting the outbreak and raise deep concerns over transparency and accuracy of the data, as well as the situation.

In the currency markets, Yen trading broadly higher today on risk aversion. But it’s outshone by Sterling, which was shot up by resignation of a key official of the UK cabinet. Euro is trading as the weakest one for now, followed by New Zealand and then Australian Dollar. Technically, EUR/GBP is on track to retest 0.8276 low and break will resume larger fall form 0.9324. EUR/JPY breaks 119.24 support and should be on tract to retest 115.86 low. USD/CHF’s break of 0.9788 resistance reaffirm near term bullishness for 0.9851 fibonacci level.

US headline CPI accelerated to 2.5% yoy in January, up from 2.3% yoy, matched expectations. CPI core was unchanged at 2.3% yoy, beat expectation