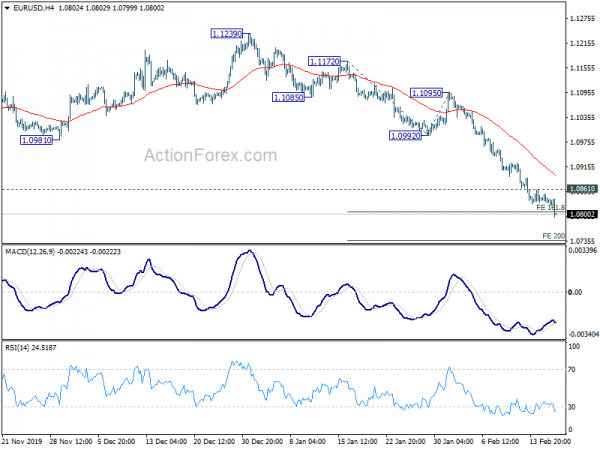 Markets remain in risk-off mode today after Apple’s warning that China’s Wuhan coronavirus outbreak would hurt sales. Deep deterioration in German economic sentiment also reflect the impact on confidence. Investors will likely remain fragile until there is sign of full operation resumption in China. But that won’t happen soon. In the currency markets, commodity currencies remain the weakest ones for the day together with Euro. It remains to be seen which would end the day as worst performing. Yen, Sterling, and Dollar are currently the strongest ones.

Technically, fresh selling in EUR/USD in early US session sends it through 1.0804 projection level. Next target would be 1.0735. EUR/GBP is set to take on 0.8276 low and break will resume whole fall from 0.9324. AUD/USD is a focus as it might now take on 0.6662/70 key support level and break will confirm down trend resumption. USD/CAD recovers after being supported by near term channel. Focus is back on 1.3327/9 resistance zone for the rest of the week.

Canada manufacturing sales dropped -0.7%, down in 11 of 21 industries

Canada manufacturing sales dropped -0.7% mom in December, much worse than expectation of 0.8% mom. Sales were down in 11 of 21 industries, representing 42.6% of the manufacturing sector. The largest declines were in the motor vehicle assembly and aerospace product and parts industries. However, these decreases were partly offset by higher sales in the primary metal industry.

ZEW President Achim Wambach said: “The feared negative effects of the Coronavirus epidemic in China on world trade have been causing a considerable decline of the ZEW Indicator of Economic Sentiment for Germany. Expectations regarding the development of the export-intensive sectors of the economy have dropped particularly sharply. Besides, the end of 2019 and the beginning of 2020 saw a worse-than-expected development of the German economy. Both the downward revision of the assessment of the economic situation and the downturn in expectations show clearly that economic development is rather fragile at the moment.”