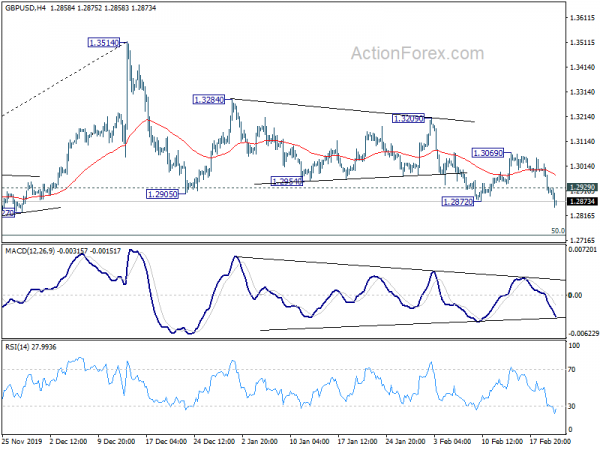 Dollar remains generally firm today as supported by solid job and manufacturing data. Euro’s selloff seem to have temporary passed a near term climate and focuses turn to other major currencies. Australian Dollar suffer deep selling after job data, dragging New Zealand Dollar lower. Meanwhile, Yen is closing following as markets are deeply concerned with the economic and political of contagion of China’s Wuhan coronavirus. Sterling is not too far behind, partly thanks to the rebound in EUR/GBP after depending a key support level.

Technically, GBP/USD’s break of 1.2872 support suggests resumption of whole corrective fall from 1.3514. Next target is 1.2736 fibonacci level. EUR/GBP defended 0.8762 key support and rebounded strongly. Further rise should be seen back towards 0.8537/8595 resistance zone. USD/CHF continues to lose upside momentum just ahead of 0.9851 fibonacci level. The next move, a break of the fibonacci resistance or rejection from there, could depend on whether EUR/CHF could get rid of 1.0608 temporary low.

In the accounts of ECB January 22-23 meeting, it’s noted that the package of stimulus measures announced last September “have lowered term premia and contributed to the overall substantial easing in financial conditions.” There were also “indications” that the package was “being gradually transmitted to the economy”.

“Market sentiment had turned positive and risk appetite among market participants seemed strong.” Additionally, “uncertainties were perceived as receding”, mainly due to US-China trade deal and stabilization in economy outlook. But monetary policy “had to remain highly accommodative for a prolonged period of time”, with inflation “still far away” from target, and “robust convergence” of inflation towards target was “not yet assured”.

Meanwhile, “risks remained tilted to the downside” even though they had become “less pronounced”. Also, “it was cautioned that a more optimistic outlook for the economy needed to be communicated carefully in order not to give rise to a premature tightening of financial conditions.”

ECB Vice President Luis de Guindos said today that “the underlying fundamentals for a continued though moderate expansion of the euro area economy remain in place, as foreseen in the December 2019 Eurosystem staff projections.” However, “risks surrounding the euro area remain tilted to the downside.. In particular, the outbreak of the coronavirus and its potential effect on global growth add a new