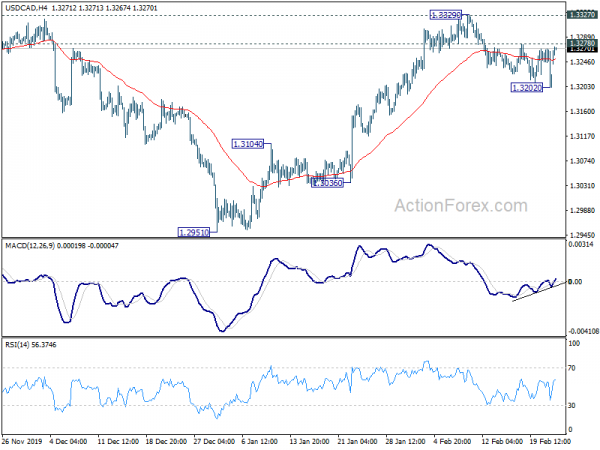 Risk aversion deepens in global financial markets today as China’s Wuhan coronavirus is clearly spreading to other countries. Gold surges to seven-year high on safe haven flow while Asian stocks are generally pressured. The currency markets are relatively quiet though as major pairs and crosses settle back into Friday’s range after initial spike. Dollar and Yen are currently the firmer ones while commodity currencies are soft.

Technically, 1.3278 minor resistance will be a focus today. Break will indicate completion of recent corrective pull back from 1.3329 and bring retest of this resistance. Yen crosses are generally seen as in consolidation, despite retreat. We’d expect more selloff in Yen at a later stage, as Japan will remain one of the countries most affected by China’s coronavirus.

Global markets start the week in risk aversion as global outbreak of China’s Wuhan coronavirus intensified over the weekend. South Korea is suffering most with a total of 763 confirmed cases and 7 deaths. The country is put on high alert in response to the community outbreak. Total cases in Japan rose to 838, including Diamond Princess liner, with 4 deaths. Cases in Iran also surged to 43, with 8 deaths.

Cases in Italy also exploded, with 152 cases and 3 deaths. Prime Minister Giuseppe Conte told state broadcaster RAI, “I was surprised by this explosion of cases.” Health authorities also warned,  “if we cannot find ‘patient zero’ then it means the virus is even more ubiquitous than we thought.”

Back in China, where the outbreak originated, according to the numbers claimed by the National Health Commission, total cases now stand at 77150, death tolls hit 2592. President Xi Jinping warned “at present, the epidemic situation is still severe and complex, and prevention and control work is in the most difficult and critical stage”. “For us, this is a crisis and is also a big test,” he added. Yet, Xi is still pushing for production restoration in some perceived low- and medium- risk provinces.

In the joint communique of the G20 finance ministers and central bankers meeting at Saudi Arabia over the weekend, it’s noted that “global economic growth remains slow and downside risks to the outlook persist, including those arising from geopolitical and remaining trade tensions, and policy uncertainty.” The group also pledged to “will enhance global risk monitoring, including of the recent outbreak of COVID-19. We stand ready to take further action to address these risks.”.

Separately, IMF Managing Director Kristalina Georgieva said, “in our current baseline scenario, announced policies are implemented and China’s economy would return to normal in the second quarter… As a result, the impact on the world economy would be relatively minor and short-lived.” She added, “but we are also looking at more dire scenarios where the spread of the virus continues for longer and more globally, and the growth consequences are more protracted”.

New Zealand retail sales rose 0.7% qoq in Q4, slightly below expectation of 0.8% qoq. Ex-auto sales rose 0.5% qoq, below expectation of 0.9% qoq. Electrical and electronic goods retailing had the largest rise of all 15 industries in the December 2019 quarter. After adjusting for price and seasonal effects, the sales volume of electronics was up 4.3 percent, following a 4.4 percent rise in the September quarter.

The economic calendar is relatively light this week. US data will catch most attention, including consumer confidence, durable goods orders and PCE inflation. The data could reveal how resilient the US economy is, in face of coronavirus risks. Also to be watched include Germany Ifo, Swiss KOF, Canada GDP and New Zealand retail sales and business confidence.

Here are some highlights fo