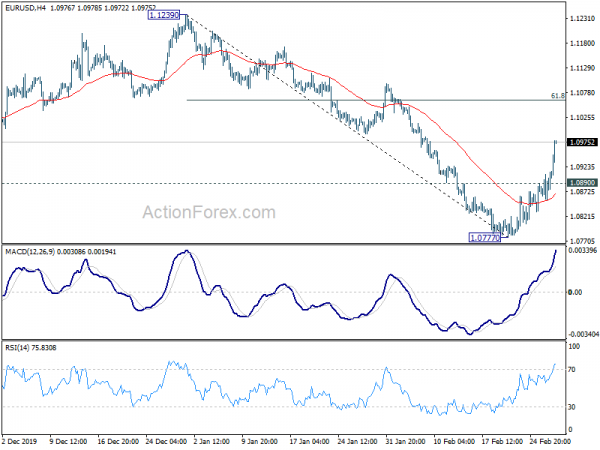 Global stock market crash on fear of Wuhan coronavirus pandemic continues today, while treasury yields are pressured too. Euro and Swiss Franc are currently the strongest ones. There are a couple of explanations, like safe haven flows out of US, due to free fall in stocks, as well as record low treasury yields. But we believe it’s more about repricing of impact on the economy. Euro took the lead down weeks ago, as the Eurozone economy, in particular export-led Germany, would be hit harder than US if the coronavirus outbreak is contained within China. But now, when every countries in dragged into it, traders are reversing the overstretched Euro bearishness.

Staying in the currency markets, Canadian Dollar is currently the weakest one, as oil’s free fall accelerates too. WTI is currently at 46.8, well on track to retest 42.05 low. Sterling is the second weakest after UK’s Brexit negotiation mandate showed it threatens to walk out from talks as soon as in June. Dollar is soft too, but weakness is not apparent, except against Euro and Swiss. The greenback’s resilience is somewhat reflected in range trading in gold too.

UK threatens to move our from negotiation with EU by June

UK government published today the negotiation mandate with EU in the document titled “The Future Relationship with the EU The UK’s Approach to Negotiations“. There the UK government threatens to walk out from the table by June if not enough progress is made.

UK reiterated that it “will not extend the transition period”. That still “leaves a limited but sufficient” time to reach an agreement. After an “appropriate number of negotiating rounds” between now and June, UK would hope that “the broad outline of an agreement would be clear and be capable of being rapidly finalised by September”.

However, “if that does not seem to be the case at the June meeting, the Government will need to decide whether the UK’s attention should move away from negotiations and focus solely on continuing domestic preparations to exit the transition period in an orderly fashion.”

Cabinet office minister Michael Gove told parliament that “a the end of the transition period on the 31st of December, the United Kingdom will fully recover its economic and political independence. We want the best possible trading relationship with the EU, but in pursuit of a deal we will not trade away our sovereignty.”

ECB Schnabel: We are very worried about spread of coronavirus

ECB Executive Board member Isabel Schnabel said policymakers are “very worried about what is currently happening with respect to the spread of the coronavirus.” “We know that this is really raising uncertainty to a large degree, for the global growth outlook but of course also for the outlook for the euro area.”

“But what we really need to understand when we are doing monetary policy is what are the potential medium-term implications, and at the moment this is unclear”, she added.