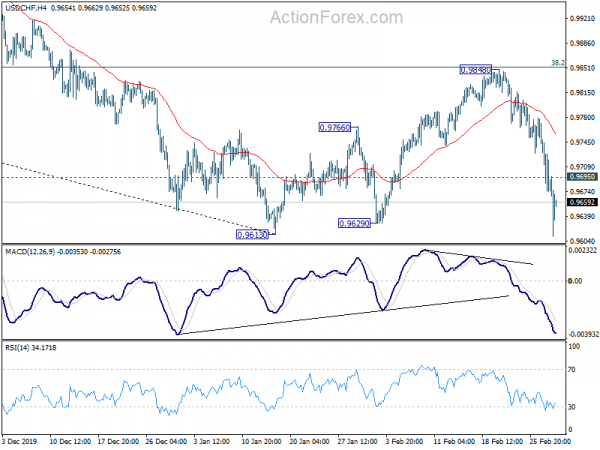 There is no end in sight for the global stock market crash yet, not for the Wuhan coronavirus outbreak. South Korea (2337 cases, 14 deaths), Italy (605 cases, 17 deaths) and Iran (388 cases, 34 deaths) are the new epicenter and situations keep worsening. In the currency markets, selloff in commodity currencies steepen today while Yen and Swiss Franc are broadly higher.

Technically, USD/CHF breached 0.9613 bottom but recovers quickly. This will be the level the watch and decisive break there will resume whole decline from 1.0237. EUR/USD retreat mildly just head of 1.1063 fibonacci resistance. This would be the right place for EUR/USD to top if rebound 1.0777 is a corrective move as viewed. Break of 1.0931 will bring retest of 1.0777 low.

Bundesbank Head Jens Weidmann admitted Germany’s economy will certainly be weigh down by global coronavirus outbreak. The economy could miss the central bank’s forecast of 0.6% GDP growth this year. There are numerous trade-related risks to the export-led economy. “Based on the current information, I am expecting this risk to actually materialize to a degree,” he said.

But Weidmann also echoed ECB President Christine Lagarde’s comment that the spread of the coronavirus doesn’t warrant a monetary policy response yet. He questioned “whether you’re likely to go out to restaurants more often” if interest rates are lower.

ECB Governing Council member Vitas Vasiliauskas said the central has a “wait and see approach” regarding the development of the coronavirus. And, “there is no problem for the governing council to meet in some extraordinary way, not to wait until the next monetary policy meeting.”

Meanwhile, Eonia money market futures show that a -10bps rate cut by ECB at June’s meeting is fully priced in.

Swiss KOF Economic Barometer rose to 100.9 in February, up from 100.1, above expectation of 97.0. That’s the third rise in a row and it “lingers just above its long-term average”. KOF said “clearly positive growth rates would be expected for the Swiss economy in the near future”. But it also noted that the result is “based on the sentiment before the outbreak of the coronavirus in northern Italy.”

Also, the development was “primarily driven by an improvement in sentiment in the manufacturing sector”. Only financial sector had a “slightly negative impact. The other indicator groups considered in the Barometer (demand for exports, construction, hospitality, other services and domestic consumer demand) show a practically unchanged picture compared to the previous month.

A batch of mixed economic data is released from Japan today. Industrial production rose 0.8% mom versus expectation of 0.4% mom. According to the survey by the Ministry of Economy, Trade and Industry, manufacturers expected output to growth 5.3% in February and than shrink sharply by -6.9% in March. However, unemployment rate