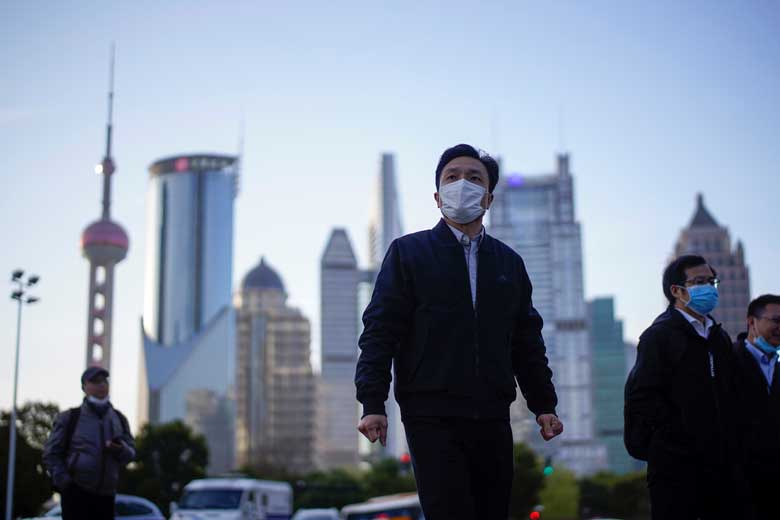 The feedback loop has started. On March 19, China announced no new cases of coronavirus in Hubei, whose capital Wuhan lies at the epicentre of the Covid-19 outbreak, for the first time in eight weeks.

Viral egress has turned into ingress: on March 19, China’s National Health Commission counted no fewer than 34 cases of ‘imported’ coronavirus, many from expatriate Chinese office workers and students, fleeing the pandemic-hit West for the perceived safety of mainland towns and cities.

It is a cyclical process at work across Asia’s largest economy.

The Shanghai Composite Index plunged 11.3% in the fortnight to February 3, a period spanning a Chinese New Year and extended by a government hoping to contain the outbreak.

Slowly China’s economy clambered out of its hole, regaining all of its losses.

Hong Kong’s Hang Seng index tracked Shanghai’s performance, losing 21% in value over the same two-week period, as investors realised that just because China was shaking off its cold, it didn’t mean the world was.

Scale of the threat

Few in China, which desires greater self-sufficiency but is heavily dependent on Western consumption of its goods, doubt the scale of the threat.

Industrial production slumped 13.5% year on year in the first two months of 2020, the first decline on record, while retail sales fell by 20.5% over the same period.

“Everyone in China expects things to get worse,” says a Shanghai-based investment banker. “A week ago, it seemed China would come out it far faster, then this past week reality hits. You see this with [mainland] A shares, which were bucking the trend, then they get hit by events in the West.”

On March 18, the Economist Intelligence Unit projected China’s economy to shrink 7% year on year in the first quarter, and for real GDP to expand by just 2.1% this year, the lowest annual rate of growth since the death of Chairman Mao in 1976.

On March 19, Nomura’s chief economist Ting Lu tipped the economy to shrink 9% in the first quarter, and to grow by just 1.3% this year.

Nomura data show the full scale of the problem, with new home sales across the mainland down 54% year-on-year in the first two weeks of March.

Chinese president Xi Jinping’s aim of doubling GDP and incomes in the decade to 2021 requires the economy to expand by at least 5.6% this year.

Barring a miracle, that won’t happen, just when the Chinese Communist Party is wobbling on many fronts. It is at loggerheads with the US administration led by president Donald Trump, despite the signing of a trade deal in January, and it may face a dual jobs-growth crisis in the months ahead.

Beijing won’t take all this trouble lying down.

It is set to unleash another wave of stimulus, backed by up to Rmb2.8 trillion ($395 billion) worth of local government bonds in an attempt to spur infrastructure growth. That could push the budget deficit to as high as 3.5%, from 2.8% last year.

Beijing will offset this with some subtle but large-scale sleight of hand. It is allowing banks to tag NPLs as ‘performing’, so long as the virus remains a threat to human life.

And on March 17, it approved the formation of the first new bad-debt manager in two decades, giving the green light to China Galaxy Asset Management.

The country retains its ability to baffle and bemuse, even in these dark days. On March 16, the People’s Bank of China injected $93 billion into the financial system by offering medium-term loans to banks and cutting the amount of cash that banks must hold as reserves for the third time this year.

Yet on March 20, the central bank again defied expectations by leaving the one-year loan prime rate unchanged at 4.05%, and the five-year LPR rate steady at 4.75%. Capital Economics says in a research note that monetary easing was inevitable, with China’s economy unlikely to get back on track in 2020.

Amid the economic and financial woe, primary capital market activity is holding up remarkably well. On February 24, Bestore, a snack food company from, of all places, Wuhan, made its debut on the Shanghai Stock Exchange after raising $70 million.

Despite the volatility, Chinese drugs maker InnoCare managed to raise $289 million this week after its initial stock sale was nearly 300 times subscribed.

Six cornerstone investors bought $164 million worth of its shares, which were listed on the Hong Kong Stock Exchange on Friday, March 20.

The week ended with yet more whipsawing on Asia’s stock markets, with Hong Kong’s benchmark index rising 5.1% on March 20, its best one-day performance since December 2011. But it still finished the week exactly 5.1% lower, a sign that Friday’s gains had much to do with the actions of bargain hunters.

Across Asia, stocks gained on Friday after a torrid week, spurred on by the actions of the US Federal Reserve and the European Central Bank.

Korea’s Kospi index gained 7.4%, after tumbling 8.4% the previous day; Australia’s S&P/ASX200 index rose 0.7%; and even the Shanghai’s Composite gained 1.6%, clawing back some of the week’s losses.

Japan’s stock markets were closed on Friday for a public holiday.

In Manila, the Philippines Stock Exchange resumed trading on Thursday, following the government’s decision to lock down the capital and close its debt, equity and currency markets for two days.

After reopening, the PSE plummeted 24%, taking its cumulative losses so far this calendar year to 40%.

Any hope coronavirus would mimic the spread in 2003 of another pathogen, severe acute respiratory syndrome (Sars), is now surely dashed for good. Then Sars only claimed a handful of cases and deaths beyond Greater China and a few other countries, notably Singapore and Canada.

This time, more than 1,000 fatalities have been linked to the Covid-19 outbreak in Spain, Italy and Iran alone.

After jumping from China to Europe and the US, Covid-19 has made landfall in southeast Asia.

On Thursday, Indonesia confirmed its 300th positive case, against none at all three weeks ago, with the death toll at 25. The following day, Indonesia’s finance minister Sri Mulyani Indrawati raised the economic crisis level to ‘standby’ from ‘alert’, and said if Covid-19 persisted, growth might plateau this year.

On Thursday, Bank Indonesia cut its benchmark interest rate for the second time in 2020 to shore up growth, provide a semblance of financial stability and curtail a massive outflow of capital.

In Cambodia, they more than doubled overnight on Tuesday – though few people have actually been tested. Across the region, once-bullish growth predictions are now distinctly bearish.

Earlier in March, Citi downgraded its GDP forecast for Thailand to 0.2% from 2.2%, while on Thursday, DBS economist Irvin Seah warned a recession in Singapore was “inevitable”. He tipped the economy to shrink by 0.5%.

He added that the city state would soon roll out a second stimulus package worth up to $11 billion.

Across Asia Pacific, a recession was “now guaranteed”, S&P Global said in a report published March 18, due to a deep first-quarter shock in China and the West’s vicissitudes.

Robin Brooks, chief economist at the Institute of International Finance, said coronavirus wasn’t a financial crisis, adding that markets would bounce back once public health concerns, particularly in the US, were alleviated.

But that message was surely delivered more in hope than expectation.

With Covid-19 only just taking hold in southeast Asia, another cycle – first ambivalence, then panic and almost certainly lockdown – has started, and that will only exacerbate problems elsewhere, including in China.

Previous: Bank of America boosts pay for tellers by $400 a month, cuts their hours amid coronavirus outbreak
Next: Goldman Sachs CEO David Solomon gets a 20% raise to $27.5 million for his work in 2019