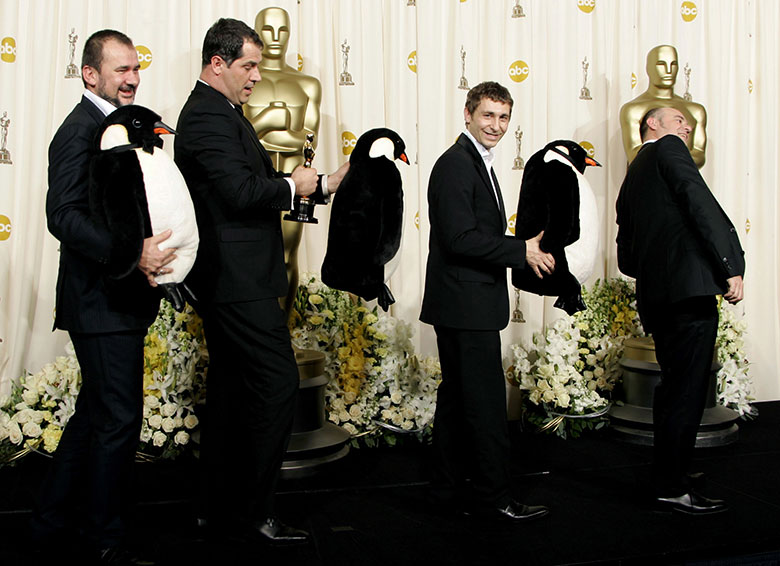 March of the Penguins’ Oscar-winning filmmakers in 2006, with Luc Jacquet second from left

Remember the film March of the Penguins? It charts the yearly journey of emperor penguins to their breeding grounds in Antarctica and the commitment of monogamous pairs to gruelling return trips to the ocean to feed their chicks.

Who could ever forget Morgan “in-the-harshest-place-on-earth-(pause)-love-finds-a way” Freeman’s narration, almost as magical as the camerawork.

It won the Oscar for best documentary in 2006 and spawned a touring exhibition, Antarctica, now showing in Brussels at the partly reopened museum of the Royal Belgian Institute of Natural Sciences.

Director and writer Luc Jacquet is planning his next project, to be filmed in the Galapagos Islands, that will explore human impact on the natural world.

The most innovative aspect may be the financing.

“March of the Penguins and the subsequent Antarctica exhibition have demonstrated that the model can be a profitable one, making it appealing to investors while preserving the freedom to express my creativity and promoting the virtuous value of the projects I carry.”

See: capitalism and environmentalism can work together.

Why Monaco? The micro-state, whose residents pay no income or capital gains tax, is not a full member of the EU, though it is partly administered from France. It has no stock exchange.

Luc Falempin, chief executive of Tokeny Solutions, a provider of new issuance and trading infrastructure for tokenized securities that codifies and enforces compliance across the lifecycle of digital assets, tells Euromoney: “Monaco is unique in Europe, having just passed legislation to enable and encourage securities token offerings.

“It is ambitious to be a funding nation and sees tokenization as its opportunity. Monaco’s government will approve from five to 15 projects a year, and its assessment and verification should offer some reassurance to investors of their legitimacy.”

These projects will have a focus on environmental impact.

Luxembourg-based Tokeny is setting up a subsidiary in Monaco. The new Jacquet film may take a year to make after the fundraising.

Falempin says: “The IceBreaker offering will likely launch in September and will fit the €20 million to €200 million deal size targeted by the principality of Monaco. The tokens will represent ownership of part of the project’s revenues and will only be open to financial institutions and qualified investors.”

Tokeny validates an on-chain identity for subscribers to STOs that have provided know your customer (KYC) and anti-money laundering (AML) documentation, and can restrict access to those that qualify within regulatory parameters set in their home jurisdictions, such as regulation D in the US.

For other deals, Falempin says: “Issuers will need to set up an entity in Monaco, but can target investors anywhere.”

Residents have plenty of money in Monaco private banks.

Perhaps Sir Philip Green himself will be tempted.

Previous: Watch live: SEC’s Jay Clayton testifies at House subcommittee hearing on markets and lending in Covid era
Next: Market Morning Briefing: Euro May Get Near Term Support At 1.12