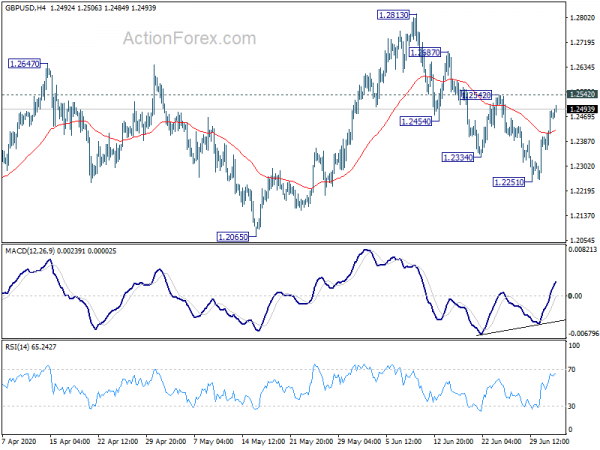 Dollar and Yen are both trading as the weakest ones for the week for now. FOMC minutes released overnight gave little support to the greenback, nor that ADP job number and ISM manufacturing. Focus is turning to non-farm payrolls report to be released today. Sterling’s roller coaster ride continues and it’s now the strongest one for the week, followed by Kiwi and Aussie.

Technically, Sterling could steal the show from Dollar today. GBP/JPY’s break of 133.98 minor resistance suggests short term bottoming at 131.68 and hints on further rebound. EUR/GBP is eying 0.9001 support and break will indicate near term bearish reversal for 0.8864 support and below. GBP/USD is also eyeing 1.2542 resistance and break will indicate completion of recent correction and target 1.2813 resistance again.

The FOMC minutes for the June meeting revealed that the members had rigorous discussion about forward guidance, asset purchases and yield curve caps/targets. We expect the framework review will be completed this month, allowing the Fed to announce changes in forward guidance and the asset purchase program at the September meeting.

It appears that many members were still skeptical about adoption of yield curve caps/targets, although a number of them showed favor in the Australian model.

More in FOMC Minutes: Changes in Forward Guidance and Asset Purchases could Come in September

Fed Bullard: A wave of substantial bankruptcies could feed into a financial crisis

St. Louis Fed President James Bullard  warned that the risk of a financial crisis remains. He said”without more granular risk management on the part of the health policy, we could get a wave of substantial bankruptcies and could feed into a financial crisis,”

Hence, “it’s probably prudent to keep our lending facilities in place for now, even though its true that liquidity has improved dramatically in financial markets.” The idea to is to make sure that markets don’t freeze up entirely in the twists and turns of a crisis.

Australia trade surplus widened to AUD 8.03B as imports and exports plunged

The trade surplus is seen as remaining elevated and has some how been lifted by the impacts of the coronavirus pandemic. Though, the down trend in both imports and exports showed sluggish domestic and external demands.

Focus is now back on 1.2542 in GBP/USD with today’s rebound. Firm break there will suggest completion of the pullback from 1.2813. Intraday bias will be turned back to the upside to retest 1.2813 and break will resume the whole rise from 1.1409. On the downside, break of 1.2251 will resume the decline to 1.2065 key near term support instead.