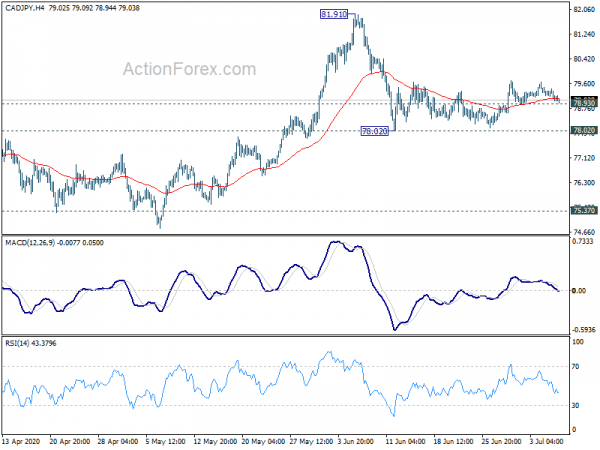 Australian Dollar weakens generally today and takes commodity currencies lower too. Risk-on markets have taken a halt this week, with some notably pullbacks in the US markets overnight. But Asian markets are just mixed. European majors are generally firmer for today, as led by Sterling. Brexit negotiations deadlock is so far generally ignored. Dollar is also mildly firmer but not important resistance is taken out so far.

ECB President Christine Lagarde said in an FT interview that the central bank’s pandemic measures have demonstrated “demonstrated their efficiency, their effectiveness.” For now, “we have done so much that we have quite a bit of time to assess” economic data “carefully.”

ECB will meet again next week. Lagarde’s messages suggested that the central bank will stand pat and adopt a wait-and-see attitude. ECB has nearly doubled the size of its pandemic purchase program to EUR 1.35T in June.

Clarida: Fed could do more with forward guidance and balance sheet

Fed Vice Chairman Richard Clarida told CNN yesterday that “we have a lot of accommodation in place. There is more that we can do. There is more that we will do if we need to”. He added that “additional forms of forward guidance that the Fed has used in the past and we would consider using in the future”. Additionally, “there’s more that we could do in terms of our balance sheet as needed.”

He also noted he increase in coronavirus cases in certain large states and Fed officials are following it closely. “The course of the economy is going to depend on the course of the virus.”

Bostic added that the next three to six weeks could be critical for the strength of the economic recovery. The rebound could plateau sooner and at a lower pace than expected.

Fed Mester: There’s some leveling off in economic recovery

Cleveland Fed President Loretta Mester said economic activity started to come back pretty well after reopening in May. However, “over the past week or so, there’s been some leveling off, and I think it’s probably due to the increase in cases not only in Ohio but across the country.”