Dollar Firms Up as Chinese Stocks Drag Others Lower, Euro Firm after ECB 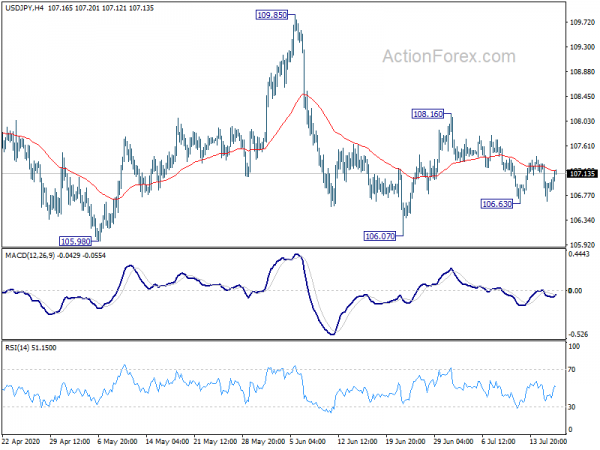 The sharp reversal in Chinese stocks is somewhat weighing on global sentiments today. European indices are generally in red while US stocks also open mildly lower. Dollar firms up mildly but upside momentum is unclear for now. Euro is also resilient after ECB stands pat as widely expected and delivers nothing astonishing. On the other hand, Australian Dollar and New Zealand Dollar are paring some of this week’s gains after dissatisfying job and inflation data. Sterling is also soft as data suggests more people have left the job market during the pandemic.

Also released, Philly Fed manufacturing survey dropped to 24.1 in July, above expectation of 20.0. Canada ADP employment rose 1042.9k in June. Canada foreign securities purchases dropped to CAD 22.41B in May.

ECB left interest rates unchanged as widely expected. The main refinancing rate is held at 0.00%. Marginal lending facility rate and deposit facility rate are kept at 0.25% and -0.50% respectively. ECB “expects the key ECB interest rates to remain at their present or lower levels until it has seen the inflation outlook robustly converge to a level sufficiently close to, but below, 2% within its projection horizon, and such convergence has been consistently reflected in underlying inflation dynamics.”

The central bank will continue the PEPP asset purchase with a total envelope of EUR 1350B, until “at least the end of June 2021” and “until it judges that the coronavirus crisis phase is over.” Principal payments from maturing securities under PEPP will be reinvested until “at least the end of 2022.” APP net purchase will continue at a monthly pace of EUR 20B, together with the additional EUR 120B temporary envelope, until the end of the year.

In the post meeting press conference, President Christine Lagarde said “incoming data and survey results suggest that economic activity improved significantly in May and June from its trough in April”. But indicators remain “well below” pre-pandemic levels. The recovery is “in its early stages” and “remain uneven across sectors and jurisdictions”. GDP is still expected to have “contracted even further overall” in Q2.

There were signs of recovery in consumption and rebound in industrial output. But “subdued labour market conditions and precautionary household saving are weighing on consumer spending”. “Weak business prospects and high uncertainty are dampening investment”. “Weakness in the global economy is hampering foreign demand”. Activity is expected to rebound in Q3 but “uncertainty about the overall speed and scale of the rebound remains high.”

UK unemployment rate unchanged at 3.9% in May

ONS noted: “The relative flatness of the unemployment figures may seem surprising, given that there are notable decreases in the number in employment. However, some initial exploratory analysis has suggested that a larger than usual proportion of those leaving employment are not currently looking for a new job